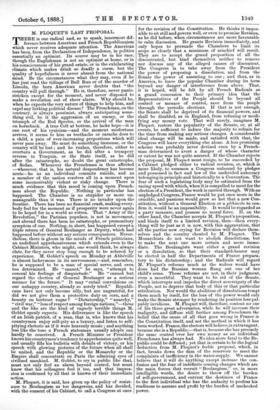 rHERE is one radical and, so to speak, innermost dif- rence between American and French Republicanism which never receives adequate attention. The American has been, from the Declaration of Independence, in politics essentially an optimist. Its source may be in his race, though the Englishman is not an optimist at home, or in his consciousness of his grand estate, or in the exhilarating climate which makes drink so deadly a curse, but the quality of hopefulness is never absent from the national mind. Be the circumstances what they may, even if he has just read the tidings of Bull Run or of the murder of Lincoln, the born American never doubts that "the country will pull through." He is, therefore, never panic- stricken except for the moment, and never disposed to make a revolution out of sheer alarm. Why should he, when he expects the very nature of things to help him, and expel any lurking political disease? The Frenchman, on the contrary, is always pessimist, always anticipating some- thing evil, be it the aggression of an enemy, or the triumph of the Red Spectre, or the arrival of the man on horseback. A true Celt at bottom, he lacks hope—it is one root of his cynicism—and the moment misfortune arrives, it seems to him as toothache or earache does to a child, a pain of ever-increasing proportions which will never pass away. He must do something immense, or the country will be lost ; and he rushes, therefore, either to overturn a Government, as he did after a trumpery reverse in Tonquin, or the State itself, as he did after the catastrophe, no doubt the great catastrophe, of Sedan. Whenever the Frenchman is thus affected —whenever, that is, his natural despondency has become acute—he as an individual commits suicide, and as a member of the nation resolves all in a moment upon some inconceivably violent or risky change. There is much evidence that this mood is coming upon French- men about the Republic. Nothing in particular has happened. The Chamber is no stupider or more un- manageable than it was. There is no invader upon the frontier. There has been no financial crash, making every- body feel for the moment as if prosperity were never again to be hoped for in a world so rotten. That " Army of the Revolution," the Parisian populace, is not in movement, and abroad there has been no catastrophe, or premonitory symptom of one. Nothing, in short, has happened except a triple return of General Boulanger as Deputy, which had happened before without any serious consequences. Never- theless, there is gloom in the minds of French politicians, an undefined apprehensiveness which extends even to the Cabinet Ministers, who might, one would think, be always elate, for they never stop long enough to be sobered by experience. M. Goblet's speech on Monday at Abbeville is almost lachrymose in its nervousness,—and, remember, he is supposed to be a man of special nerve, and even too determined. He " cannot," he says, " attempt to conceal his feelings of disquietude." He "cannot but regard the election of General Boulanger as a serious menace for the future." It may "entail convulsions on our unhappy country, already so sorely tried." Republi- cans have not only become silly, but are ungrateful, for did we not give them a protective duty on corn, and a bounty on beetroot sugar ? " Dictatorship," " anarchy," " civil war," "loss of respect among foreign nations,"—these and the like are the kind of vaguely terrible things M. Goblet openly expects. His deliverance is like the speech of an Irish patriot, of a man, that is, who knows that his countrymen enjoy self-pity as a luxury, and listen to self- pitying rhetoric as if it were heavenly music ; and anything less like the tone a French statesman usually adopts can hardly be conceived. A French Minister or President knows his countrymen's tendency to apprehension quite well, and usually fills his bulletin with details of victory, or his speech with glowing pictures of the future when all shall be united, and the Republic or the Monarchy or the Empire shall concentrate on Paris the admiring eyes of civilised mankind. M. Goblet, to cry in public like that, must not only feel an alarm beyond control, but must know that his colleagues feel it too, and that impres- sion is confirmed by all that is known of their immediate action.

M. Floquet, it is said, has given up the policy of resist- ance to Boulangism as too dangerous, and has decided, with the consent of his Cabinet, to call a Congress at once for the revision of the Constitution. He thinks it impos- sible to sit still and govern well, or even to promise Revision, as he did before, when circumstances are more favourable to calm discussion. He grants Revision immediately, and only hopes to persuade the Chambers to limit its scope so closely that a minimum of mischief will result. They are to accept the grand proposition of all the discontented, but bind themselves neither to remove nor discuss any of the alleged causes of discontent. The Congress is to take away from the President the power of proposing a dissolution, and from the Senate the power of assenting to one ; and thus, as in America, to leave the popular Chamber during its term beyond any danger of interference from above. That, it is hoped, will be felt by all French Radicals as a grand concession to their primary idea that the Representatives of the People should be beyond all control or menace of control, save from the people through the periodic elections. If that is not enough, the Senate shall be deprived of its financial powers, and shall be disabled, as in England, from refusing or modi- fying any money vote. That will surely, imagines M. Floquet, restore the popularity of the Senate, or, at all events, be sufficient to induce the majority to refrain for the time from making any serious changes. A considerable ideal change will be made, and satisfied with that, the Congress will leave everything else alone. A less promising scheme was probably never devised even by a French- man determined to avert a danger of whose character or extent he was not quite assured. If the Chamber rejects the proposal, M. Floquet must resign, to be succeeded. by a Cabinet pledged either to radical revision, or, which is more likely, to summon a Congress unbound by pledges and possessed in fact and law of the undivided autocracy belonging in principle and historically to a Convention. The fear of such a legislating body may be estimated from the racing speed with which, when it is compelled to meet for the election of a President, the work is carried through. With an unpledged Congress, France would be put once more in the crucible, and passions would grow so hot that a new Con- stitution, without a General Election or a ple'biscite to con- firm it, would be an impossibility. It would be regarded as a party measure, and possess no moral force. If, on the other hand, the Chamber accepts M. Floquet's proposition, and binds itself to a limited revision, then—then every- thing will be just as it is now, with this aggravation, that all the parties now crying for Revision will declare them- selves and the country cheated by M. Floquet. The Monarchists do not want to abolish dissolutions, but to make the next one more certain and more imme- diate. The Boulangists want either a grand revision or a dissolution, so that their standard-bearer may be elected in half the Departments of France prepara- tory to his dictatorship ; and the Radicals will regard M. Floquet's reforms much as the wolves would have done had the Russian woman flung out one of her child's arms. Those reforms are not, in their judgment, even a mouthful. They want to be rid of the Senate, which interrupts and impedes the direct sovereignty of the People, not to deprive that body of this or that particular attribution. Nor would the abolition of dissolutions tempt them much by itself, for the loss of the power would only make the Senate stronger by rendering its position less pal- pably invidious. M. Floquet will, therefore, content no one of his three great adversaries, while he will increase their malignity, and diffuse still further among Frenchmen the belief that the cause of all that goes wrong in France is the Constitution itself, and not the method in which it has been worked. France, the electors will believe, is extravagant, because she is a Republic,—that is, because she has precisely the same control over her own money as an individual Frenchman has always had. No idea more fatal to the Re- public could be diffused; yet that is certain to be the logical deduction from M. Floquet's feeble proposal, which, in fact, breaks down the dam of the reservoir to meet the complaints of inefficiency in the water-supply. We cannot believe that it will do anything except increase the con- fusion and the fear of indefinite coming changes which are the main forces that recruit "Boulangism," or, in more intelligible words, the desire to throw off the burden of self-government, and entrust the destinies of France to the first individual who has the audacity to profess his readiness to assume and profit by the burden of unchecked power.