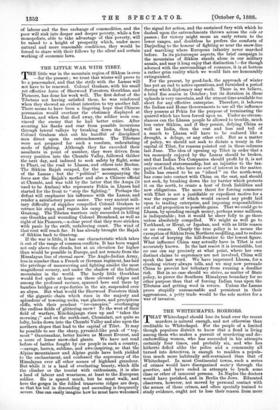 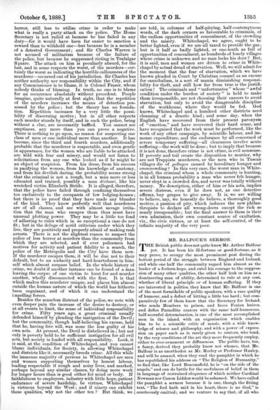 T Whitechapel should. lose its head over the recent murders is natural enough, and not otherwise than creditable to Whitechapel. For the people of a limited though populous district to know that a fiend is living among them who makes a pursuit of murdering and die- embowelling women, who has succeeded in his attempts certainly four times, and probably six, and who has hitherto defied. alike the police and a community all turned into detectives, is enough to madden a popula- tion much more habitually self-restrained than that of Whitechapel. In most Continental towns, such a series of crimes would have disorganised socie'y through the quartier, and have ended. in attempts to lynch some class or other of innocent persons. In Naples the doctors would have perished, and in Berlin the Jews. Educated observers, however, not moved by personal contact with the scenes of these crimes, and often specially trained to study evidence, ought not to lose their reason from mere horror, still less to utilise crime in order to make what is really a party attack on the police. The Home Secretary is not railed at because he has failed in any duty—for it would have been far easier to sanction a reward than to withhold one—but because he is a member of a detested Government; and Sir Charles Warren is not accused of militarism because of the failure of the police, but because he suppressed rioting in Trafalgar Spare. The attack on him is peculiarly absurd, for the last, and in some respects the worst, of the murders—cer- tainly the worst as indicating the horrible callousness of the murderer—occurred out of his jurisdiction. Sir Charles has neither authority nor responsibility within the City, and if any Commissioner is to blame, it is Colonel Fraser, whom nobody thinks of blaming. In truth, no one is to blame for an occurrence absolutely without precedent. People imagine, quite naturally at first sight, that the repetition of the murders increases the means of detection pos- sessed by the police ; but the theory has no founda- tion. Repetition increases by a very little the possi- bility of discerning motive ; but in all other respects each murder stands by itself, and in each the police, being without a clue, are necessarily baffled. You cannot see emptiness, any more than you can prove a negative. There is nothing to go upon, no reason for suspecting one class of men or one individual more than another. It has become, since the third and fourth murders, additionally probable that the murderer is respectable, and even gentle in appearance, for the women who are liable to be attacked are wild with fear and misery, and would not listen to solicitations from any one who looked as if he might be an object of suspicion. From his dress, from his success in pacifying the women, from his knowledge of anatomy, and from his devilish daring, the probability seems strong that the criminal is not a rough, but a Mall more or less educated and trained, possibly a man déclassé, like his wretched victim Elizabeth Stride. It is alleged, therefore, that the police have failed through confining themselves too exclusively to the occupants of low lodging-houses ; but there is no proof that they have made any blunder of the kind. They know perfectly well that murderers are of all classes, and see with almost savage irrita- tion that the man who escapes them thus must have unusual plotting power. They may be a little too fond of adhering to rules which in so exceptional a case do not fit ; but in the deluge of acrid criticism under which they live, they are positively and properly afraid of making rash arrests. There is not the slightest reason to suspect the police of less horror at murders than the community from which they are selected, and if ever policemen had motives for activity and patient fidelity to a search, the police of the Metropolis and the City have them now. If the murderer escapes them, it will be due not to their default, but to an audacity and hard-heartedness in him- self which almost surpass belief. In the whole history of crime, we doubt if another instance can be found of a man leaving the corpse of one victim to hunt for and murder another, wholly disconnected with the first. It is that which makes this murderer unique, and places him almost outside the human nature of which the world has hitherto been cognisant, and of which it can understand the impelling forces.

Besides the senseless distrust of the police, we note with even deeper pain the increase of the desire to destroy, or at all events to limit, the sense of individual responsibility for crime. Fifty years ago, a great criminal usually defended himself by pleading the instigation of the Devil ; but the community, though half-believing his excuse, held that he, having free will, was none the less guilty of his own acts. At present, the Devil is disbelieved in ; but not only is poverty held to be sufficient instigation for all evil acts, but society is loaded with all responsibility. Look, it is said, at the condition of Whitechapel, and you cannot blame individuals, for Society, in allowing Whitechapel and districts like it, necessarily breeds crime. All this while the immense majority of persons in Whitechapel are men and women supporting themselves by honest labour, leading respectable if rough and noisy lives, and marked, perhaps beyond any similar classes, by doing more work for longer hours than is good either for mind or body. If faithfulness to employers, industry with little hope, patient endurance of severe hardship, be virtues, Whitechapel is virtuous beyond the West ; and if ninety can exhibit these qualities, why not the other ten ? But think, we

are told, in columns of half-pitying, half-contemptuous words, of the dark corners so favourable to criminals, of the endless opportunities of concealment, of the crowding and the misery. Whitechapel, we agree, ought to be better lighted, even if we are all taxed to provide the gas ; but is it half as badly lighted, or one-tenth as full of opportunities of concealment, as hundreds of lonely villages where crime is unknown and no man locks his door ? But, it is said, men and women are driven to crime in White- chapel by actual dread of starvation. Well, we will admit for the moment that the fear of starvation, which we have known pleaded in Court by Christian counsel as an excuse for cannibalism, is a sort of mania diminishing responsi- bility for theft, and still how far from true is the justifi- cation ! The criminals and " unfortunates " whose " awful condition under the burden of society " is held to make them irresponsible, are not choosing their careers to avoid starvation, but only to avoid the disagreeable discipline of the workhouse, where they would be fed. God knows, Whitechapel and a hundred other districts need cleansing of a drastic kind ; and some day, when the English have recovered from their present paroxysm of "emotion," and have recovered their hard sense, and have recognised that the work must be performed, like the work of any other campaign, by scientific labour, and im- mense expenditure, and the endurance by all concerned of severe temporary suffering—all clearances involve acute suffering—the work will be done ; but to imply that because it is not done, therefore crime is not crime, is evil nonsense. If poverty and toil create the disposition to murder, why are not Trappists murderers, or the men who in Tuscan villages die of pellagra caused by hereditary hunger and overcrowding? In this very case, the worst man in White- chapel, the criminal whom a whole community is hunting, is in all human probability a man who never felt hunger, never slept in a crowded den, and never was totally without money. No description, either of him or his acts, implies severe distress, even if he does not, as one detective affirms, buy grapes to give away. It is, we are willing to believe, nay, we honestly do believe, a thoroughly good motive, a passion of pity, which induces the new philan- thropists to declare all wrong-doers except the rich so nearly irresponsible ; but the final answer to them is their own admission, their own constant source of exultation, viz., the civic virtues, or at least the self-control, of the infinite majority of the very poor.