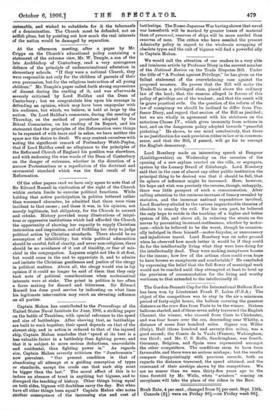 Page 19, 6 October 1906 — The Gordon-Bennett Cup for the International Balloon Race has been
Close

The Gordon-Bennett Cup for the International Balloon Race has been

won by Lieutenant Frank P. Lahm (U.S.A.) The object of the competitors was to stay in the air a minimum period of forty-eight hours, the balloon covering the greatest distance as the crow flies from Paris to be the winner. Sixteen balloons started, and of these seven safely traversed the English Channel, the winner, who crossed from Caen to Chichester, and was four hours over the sea, descending near Whitby, a distance of some four hundred miles. Signor von Willer (Italy), Hull (three hundred and seventy-five miles), was a good second; the Comte de la Vaulx (France), Walsingham, was third; and Mr. C. S. Rolls, Sandringham, was fourth. Germany, Belgium, and Spain were represented amongst the other competitors. The conditions seem to have been favourable, and there were no serious mishaps ; but the results compare disappointingly with previous records, both as regards the distance traversed, the speed attained, and the command of their airships shown by the competitors. We are no nearer than we were thirty-five years ago to the time foretold by Mr. Wells, when " aviators " soaring on aeroplanes will take the place of the riders in the Row.