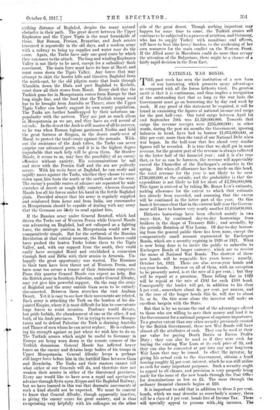 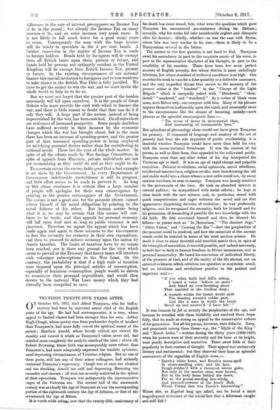 rilHE past week has seen the institution of a new form -I- of war borrowing, which presetts many advantageg

as compared with all the forms hitherto tried. Its greatest

merit is that it is continuous, and thus implies a recognition of the outstanding fact that as long as the war lasts the Government must go on borrowing day by day and week by week. If any proof of this statement be required, it will be found in examining the figures of national income and outgo for the past half-year. Our total outgo between April 1st and September 30th was £1,328,000,000. Towards that outgo the revenue receipts were £255,000,000; in other words, during the past six months the Government, ignoring balances in hand, have had to borrow £1,073,000,000, or fifty per cent, more than the total of our National Debt when war began. In the half-year that lies ahead very similar figures will be revealed. It is true that we shall got in more revenue, for the greater part of the revenue is always collected in the latter half of the financial year ; and it is a'ss true that, as far as can be foreseen, the revenue will appreciably exceed the Chancellor of the Exchequer's estimates in the spring. But when all allowance has been made on this head, the total revenue for the year is not likely to be over £750,003,000 at the outside, and the probability is that the expenditure is not likely to fall far short of £2,700,000,000. This figure is arrived at by taking Mr. Boner lanv's estimate. making allowance for the extent to which that estimate has already been exceeded, and assuming that. the excess will be continued in the latter part of the year. On this basis it becomes clear that in the current half-year the Govern- ment will have to borrow very nearly another ti,000poosoa.

Hitherto borrowings have been effected mainly in two ways—first, by continued day-to-day borrowings from bankers in the shape of Treasury Bills ; and secondly, by the periodic flotation of War Loans. Of day-to-day borrow- ing from the general public there has been none, except the comparatively small amount represented by Exchequer Bonds, which are a security expiring in 1920 or 1921. What is now being done is to invite the public to subscribe to Exchequer Bonds of longer currency, which are to receive the name of National War Bonds. The shortest of these new bonds will be repayable five years hence ; namely, October 1st, 1922. There are also seven-year bonds and ten-year bonds. Interest on all of them, with an exception to be presently noted, is at the rate of 5 per cent,; but they will be repaid at a premium. Those falling due in 1922 will be repaid at the rate of £102 for each £100 bond. Consequently the lender will get, in addition to his clear 5 per cent., somewhere about 6s. per cent, per annum, and in the case of the longer bonds this 6s. will rise to about 7s. or 8s. On this score alone the investor will make an excellent bargain with the State.

But that is by no means the end of the advantages offered to those who are willing to save their money and lend it to the Government for a national purpose of supreme importance. To a greater extent than any other security previously created by the British Government, these new War Bonds will have almost all the attributes of cash. They can be used at their par value for paying Death Duties or Excess Profits Duty ; they can also be used as if they were cash for buying the existing War Loan at its cash price of 95, and they can also be converted at par into any new long-term War Loan that may be issued. In effect the investor, by giving his actual cash to the Government, obtains is bond bearing roughly 51 per cent, interest, which he can still utilize as cash for many important purposes. Such a security ought to appeal to all classes, and provision is verv properly being made for the issue of the new bonds through the Post Offiot for denominations as low as £5. The issue through the ordinary financial channels begins at £50.

It is important to add that in addition to these 5 per cent. bonds, which We may describe as everybody's money, there will be a class of 4 per cent, bonds free of Income Tax. These will Specially appeal to persons withvbig incomes. The difference in the rate of interest presupposes an Income Tax of 4s. in the pound ; but already the Income Tax on many incomes is 5s., and on some incomes very much more. It is not likely to fall much lower for a good many years to come. Consequently the man with the large income will do wisely to speculate in the 4 per cent. bonds. A further concession in the matter of Income Tax is made to foreign holders. Bonds held by foreigners will be exempt from all British taxes upon them, present or future, and bonds held by persons not ordinarily resident in the United Kingdom will be exempt from British Income Tax, present or future. In the emitting circumstances of our national finance this special invitation to foreigners and to non-residents to take shares in the British War Debt is fully justified. We have to get the money to win the war, and we must invite the whole world to help us to do so.

But we must not forget that the greater part of the burden necessarily will fall upon ourselves. It is the people of Great Britain who must provide the cash with which to finance the war, and there is little reason to doubt that they can do it if only they will. A large part of the nation, instead of being impoverished by the war, has been enriched. On all sides there are evidences of increased prosperity. Some people doubtless have suffered severely in their incomes by the economic changes which the war has brought about, but in the main there has been an increase of spending-power, and the greater part of that increased spending-power is being employed for satisfying personal desires rather than for contributing to national needs. There lies the crux of the whole matter. In spite of all the efforts made by War Savings Committees, in spite of appeals from Ministers, private individuals are not yet economizing as they could do and as they ought to do.

To a certain extent the excuse holds good that a bad example is set them by the Government. In every Department of Government indefensible wastefulness is still in progress, and little effort seems to be made to prevent it. As long as this abuse continues it is certain that a large number of people will apologize for their own extravagance by pointing to the greater extravagance of the Government. The excuse is not a good one, for the patriotic citizen cannot relieve himself of his moral obligations by pointing to the moral failures of his rulers. But human nature being what it is, we may be certain that this excuse will con- tinue to be made, and that appeals for personal economy will fall upon deaf ears so long as public economy is not practised. Therefore we repeat the appeal which has been made again and again in these columns to the Government to face the necessity for economy in their own expenditure, and then to proceed to enforce economy upon the nation by drastic taxation. The limits of taxation have by no means been reached, nor is there any ground for the view which seems to prevail at the Treasury that heavy taxes will interfere with voluntary subscriptions to the War Loan. On the contrary, the probability is that if a high scale of taxation were imposed upon the principal articles of consumption, especially of luxurious consumption, people would be driven to economize their personal expenditure, and would then devote to the national War Loan money which they had virtually been compelled to save.