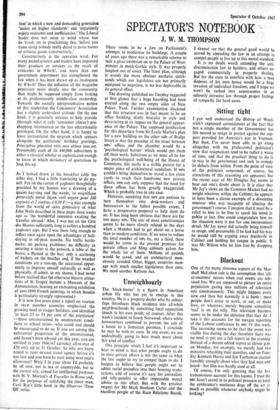 There seems to be a jinx on Parliament's attempts to modernise its buildings. A couple of years ago there was a remarkable scheme to tack a great extension on to the Palace of West- minster in mock-Gothic style. It was properly laughed out of court. The latest plan, although it avoids the more obvious aesthetic quick- sands which our legislators are not primarily equipped to negotiate, is no less deplorable in its general effect.

The drawing published on Tuesday suggested at first glance that a huge hoarding had been erected along the two empty sides of New Palace Yard. Further examination disclosed that this structure was in fact meant to' be an office building, dimly brutalist in style and devastating in its impact on the general appear- ance of the Palace. The supposed justification for this departure from Sir Leslie Martin's plan for a new building on the other side of Bridge Street is that the presence of the street between MPs' offices and the chamber would be a `psychological barrier' which would put them off their work. Solicitous as we must all be for the psychological well-being of the House of Commons, this really is a risible pretext for a major piece of architectural vandalism. If MPs couldn't bring themselves to travel a few extra yards to reach their handsome new private offices, one can only suppose that the need for those offices has been greatly exaggerated. Which is probably true in any case.

However, accepting that MPs are anxious to turn themselves into desk-workers and bureaucrats to the fullest possible extent, I have a progressive proposal to help them do so. It has long been obvious that there are far too many MPs. The size of most constituencies seems to be more closely related to the days when a Member had to get about on a horse than to modern conditions. If we were to reduce the total number of MPs by, say a third; there would be room in the present premises for private offices and filing cabinets galore for the whole lot of them. Millions of pounds would be saved, and an architectural mon- strosity avoided. Other, bigger, countries man- age with much smaller legislatures than ours. We need another Reform Act.

The `block-buster' is a figure in American urban life who has yet to emerge in this country. He is a property dealer who by subter- fuge introduces black residents into all-white neighbourhoods by outwitting local opposition (much to his own profit, of course). After this week's incident in South Norwood, where white houseowners combined to prevent the sale of a house to a Jamaican postman, I conclude he may be with us soon. In any event, we are undoubtedly going to hear much more about this kind of conflict.

One principle which I .feel it's important to bear in mind is that what people ought to do in their private affairs is not the same as what the law ought to try to compel them to do. I happen to believe that people ought not to admit racial prejudice into their housing trans- actions, and of course it's easy for journalists and telly-pundits to offer impeccable moral _ advice to this effect. But with the greatest respect for Mr Mark Bonham Carter and the excellent people of the Race Relations Board, I cannot see that the general good would be served by amending the law in an attempt to compel people to live up to this moral standard.

It is no doubt worth extending the anti- discrimination law to builders, and others en- gaged commercially in property dealing. But for the state to interfere with how a man disposes of his own house would be a huge invasion, of individual freedom, and I hope we won't be rushed into acquiescence in an odiously intrusive law through proper feelings of sympathy for hard cases.

I an well understand the Bishop of Wool- wich's expressed astonishment at the fact that not a single member of the Government has felt moved to resign in protest against the sup- port provided for America's war in Vietnam. But then, I've never been able to go along altogether with the professional politician's view that resignations tend to be rather a waste of time, and that the practical thing to do is to stay in the government and seek to remedy its defects from within. From, the point of view of the politician concerned, of course, the attractions of this reasoning are apparent; but the recent case of Mr Douglas Jay seems to bear out one's doubt about it. It is clear that Mr Jay's views on the Common Market had no weight whatever within the Cabinet; he appears to have been a classic example of a dissenting minister who was incapable of altering the government's course. I imagine that it must be a relief to him to be free to speak his mind in public at last. One could congratulate him on the situation were it not for one inconvenient detail. Mr Jay never did actually bring, himself to resign, and presumably if he had had his way he would still be arguing away fruitlessly in Cabinet and holding his tongue in public. It was Mr Wilson who set him free ,by dropping him.

One of the many tiresome aspects of the Mar- shall McLuhan cult is the assumption that 'all- at-oneness' occurs when real events are tele- vised live. We are supposed to picture an entire population gazing into millions of television sets simultaneously. This might happen every now and then but normally it is bunk : most people don't cease to work, or eat, or make love, or whatever, merely because something 'real' is on the telly. The television business seems to be under the delusion that they do. I take it this accounts for the meagre reporting of the Labour conference by BBC TV this week. The reasoning seems to be that the event was visible live during the day therefore there was no need to put out a full report in the evening. Instead of a decent edited report at eleven p.m. on Monday, for example, we merely had two ministers rehashing their speeches, and on Tues- day Kenneth Harris and Ian Trethowan chatted (sensibly enough) about what they had seen and heard—but film was hardly used at all.

Of course, I'm only guessing that the live transmissions account for this lacuna. I trust the mac hasn't caved in to political pressure to keep the conference's mutinous dogs off the air as much as possible whenever anybody might be looking?