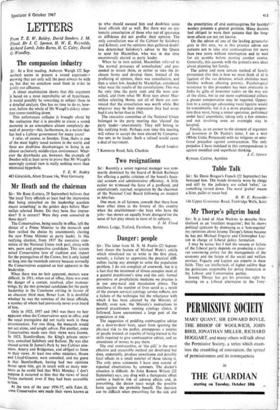 Sir: Mr Rose (Letters, 29 September) believes that 'the local Tory officials at least had the impression

that being consulted on the leadership question meant something' in the golden days before Mac- millah selected Home. Do they have that impres- sion? It is correct? Were they even consulted in those days?

The Conservatives, being usually in office, left the choice of a Prime Minister to the monarch and then ratified the choice by unanimously electing the new Prime Minister as party leader. In this ratifying election, from 1937 the executive com- mittee of the National Union took part, along with

for the prerogatives of the Crown, but it only lasted so long into the twentieth century because normally the Conservatives acquired an heir apparent, to the leadership.

When there was no heir apparent, matters were difficult. In 1911, when out of office, there was even the danger of a contest, resolved, after manoeu- vrings, by the two principal candidates for the party leadership in the Commons retiring in favour of

an. obscurer third man, Bonar Law. ft is doubtful whether he was the nominee of the local officials, a number of whom had previously never even heard of him.

Only in 1923, 1957 and 1963 was there no heir apparent when the Conservatives were in office, and the royal prerogative did not really work in these circumstances. For one thing, the monarch would not act alone, and sought advice. For another, some Conservatives made sure their views were known. In 1923, Stamfordham, the King's private secre-* tary, consulted Salisbury and Balfour. He was also chased across St James's Park by two Cabinet min- isters, Amery and Bridgeman, and obliged to listen to their views. At least two other ministers, Hoare and Lloyd-Graeme, were consulted, and my guess is that Stamfordham, having had two opinions thrust upon him, got in touch with as many min- isters as he could find that Whit Monday. I don't suppose it occurred to trim that the views of local Tories mattered, even if they had been accessible to him.

At the turn of the year 1956-57, with Eden ill, tome Conservative MPS made their views known as

to who should succeed him and doubtless some local officials did as well. But there was no sys- tematic consultation of those who out of ignorance or diffidence did not proffer their opinion. The only consultation was of the Cabinet by Salisbury and Kihnuir, and the opinions thus gathered doqbt- less determined Salisbury's advice to the Queen to send for Macmillan, who was in due time unanimously elected as party leader.

When he in turn retired, Macmillan referred to 'the normal processes of consultation,' and pro- ceeded to invent them, or rather to take the in- choate forms and develop them. Instead of the proffering of opinion, there was consultation, and then a select few, headed by Macmillan, considered what were the results of the consultations. This was the only time the party rank and file were con- sulted, and from what Mr Rose says about Mac- millan selecting Home, not all of them are con- vinced that the consultation was worth while. But whatever may be their impression they had never • _ had it any better than in 1963.

The executive committee of the National Union belonged to the party meeting that 'elected' the party leader—unanimously. They still belong to this ratifying body. Perhaps next time this meeting will refuse to accept the man elected by Conserva- tive. MPS to be leader. Such a refusal would cause a deal of merriment.