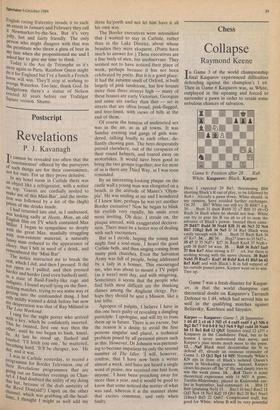 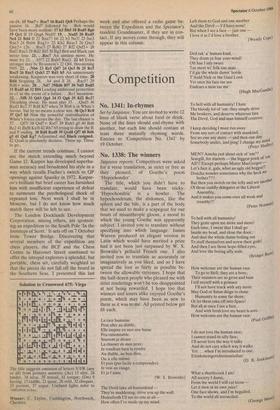 Tn Game 3 of the world championship final Kasparov • experienced difficulties defending against the champion's 1 e4. Then in Game 6 Kasparov was, as White, outplayed in the opening and forced to surrender a pawn in order to retain some nebulous chances of salvation.

Game 7 was a fresh disaster for Kaspar- ov, in that the world champion cast theoretical doubt on Kasparov's Tarrasch Defence to 1 d4, which had served him so well in the qualifying matches against Beliavsky, Korchnoi and Smyslov.

If the current trends continue, I cannot see the match extending much beyond Game 12. Karpov has developed superhu- man accuracy and broadened his style in a way which recalls Fischer's switch to OP openings against Spassky in 1972. Kaspar- ov's brilliant but brief career has furnished him with insufficient experience of defeat to surmount the psychological shock of repeated loss. Next week I shall be in Moscow, but I do not know how much match there will be left to see.

The London Docklands Development Corporation, among others, are sponsor- ing an expedition to the South Pole 'In the footsteps of Scott.' It sets off on 7 October from Tower Bridge. Discovering that several members of the expedition are chess players, the BCF and the Chess Centre in Harcourt Street combined to offer the intrepid explorers a splendid, but portable, chess set, carefully weighted so that the pieces do not fall off the board in the Southern Seas. I presented this last week and also offered a radio game be- tween the Expedition and the Spectator's resident Grandmaster, if they are in con- tact. If any moves come through, they will appear in this column.