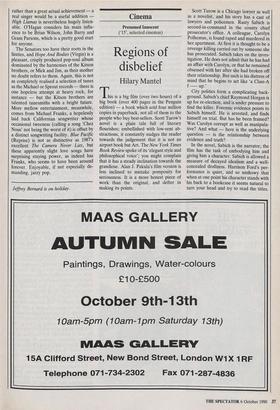 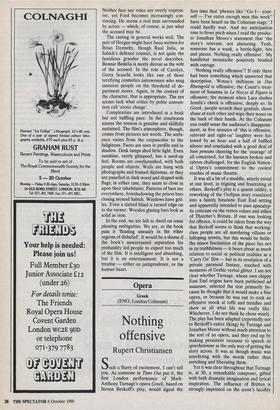 This is a big film (over two hours) of a big book (over 400 pages in the Penguin edition) — a book which sold four million copies in paperback, not all of them to the people who buy best-sellers. Scott Turow's novel is a plain tale full of literary flourishes; embellished with low-rent ab- stractions, it constantly nudges the reader towards the judgement that it is not an airport book but Art. The New York Times Book Review spoke of its 'elegant style and philosophical voice'; you might complain that it has a steady inclination towards the grandiose. Alan J. Pakula's film version is less inclined to mistake pomposity for seriousness. It is a more honest piece of work than the original, and defter in making its points.

Scott Turow is a Chicago lawyer as well as a novelist, and his story has a cast of lawyers and policemen. Rusty Sabich is second-in-command in the county chief prosecutor's office. A colleague, Carolyn Polhemus, is found raped and murdered in her apartment. At first it is thought to be a revenge killing carried out by someone she has prosecuted. Sabich takes on the inves- tigation. He does not admit that he has had an affair with Carolyn, or that he remained obsessed with her after she had broken off their relationship. But such is his distress of mind that he begins to act like 'a Class-A f — up.'

City politics form a complicating back- ground. Sabich's chief Raymond Horgan is up for re-election, and is under pressure to find the killer. Forensic evidence points to Sabich himself. He is arrested, and finds himself on trial. But has he been framed? Was Carolyn corrupt as well as manipula- tive? And what — here is the underlying question — is the relationship between evidence and truth?

In the novel, Sabich is the narrator; the film has the task of embodying him and giving him a character. Sabich is allowed a measure of decayed idealism and a well- concealed drollness. Harrison Ford's per- formance is quiet, and so unshowy that when at one point his character stands with ' his back to a bookcase it seems natural to turn your head and try to read the titles.

Neither face nor voice are overly express- ive, yet Ford becomes increasingly con- vincing. He seems a real man surrounded by actors — which, of course, is just what the accused may be.

Complexities are introduced at a brisk but not baffling pace. In the courtroom scenes the tension is genuine and skilfully sustained. The film's atmosphere, though, comes from pictures not words. The ambi- ence varies from the crepuscular to the fufiginous. Faces are seen in profile and in shadow. Desk lamps shed little light. Even, sunshine, rarely glimpsed, has a used-up feel. Rooms are overfurnished, with both people and objects. Walls are hung with photographs and framed diplomas, or they are panelled in dark wood and draped with flags; in either case, they seem to close in upon their inhabitants. Patterns of bars are everywhere, foreshadowing the prison bars closing around Sabich. Windows have gril- les. Even a slatted blind is turned edge-on to the viewer. Wooden glazing bars look as solid as iron.

In the end, we are left to dwell on some pleasing ambiguities. We are, as the book puts it 'floating uneasily in the ether regions of disbelief' It would be a shame if the book's unwarranted reputation for profundity led people to expect too much of the film. It is intelligent and absorbing, but it is an entertainment. It is not a treatise — either on jurisprudence, or the human heart.