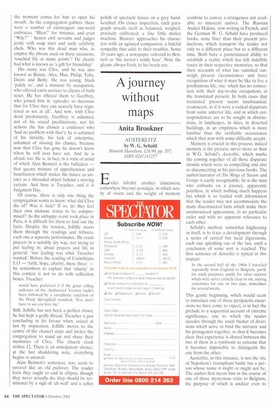 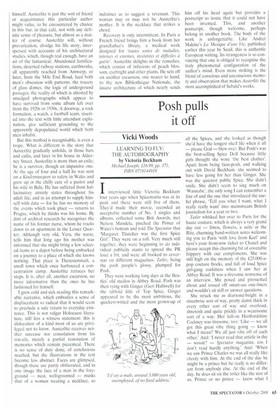 A journey without maps

AUSTERLITZ by W. G. Sebald Hanish Hamilton, £16.99, pp. 357, ISBN 02411.11257 Exiles inhabit another dimension, somewhere beyond nostalgia, in which acuity of vision and the weight of memory

combine to convey a strangeness not available to innocent natives. The Russian Andrei Makine, now writing in French, and the German W. G. Sebald have produced books, none finer than their present productions, which transport the reader not only to a different place but to a different time. Both have a preternatural ability to establish a reality which has left indelible traces in their respective memories, so that their accounts of what has vanished outweigh present circumstances and force recognition of what it must be like to live a posthumous life, one which has no connection with their day-to-day occupations in the translated present. In both cases that translated present seems insubstantial, evanescent, as if it were a radical departure from some anterior life, and in which correspondences are to be sought in abstractions, in landscapes, in skies. in deserted buildings, in an emptiness which is more familiar than the verifiable occurrences which they now with some difficulty accept.

Memory is crucial in this process; indeed memory is the process, never more so than in W.G. Sebald's Austerlitz, which marks the coming together of all those disparate strands which were so compelling and also so disconcerting in his previous books, The author/narrator of The Rings of Saturn and Vertigo is easily recognisable: he is the man who embarks on a journey, apparently pointless, in which nothing much happens but which is so loaded with information that the reader may not accommodate the many disconnected facts which make their unannounced appearance, in no particular order and with no apparent relevance to each other.

Sebald's method, somewhat frightening in itself, is to trace a development through a series of surreal but lucid digressions, each one spiralling out of the last, until a conclusion of some sort is reached. The first sentence of Austerlitz is typical in this respect:

In the second half of the 1960s I travelled repeatedly from England to Belgium, partly for study purposes, partly for other reasons which were never entirely clear to me. staying sometimes for one or two days, sometimes for several weeks.

This gentle beginning, which would seem to introduce one of those peripatetic excursions we have come to expect, is in fact the prelude to a sequential account of extreme significance, one to which the reader accedes through the usual thicket of diversions which serve to bind the narrator and his protagonist together, so that it becomes clear that experience is shared between the two of them in a symbiosis so extreme that it becomes impossible to distinguish the one from the other.

Austerlitz, in this instance, is not the site of Napoleon's triumphant battle but a person whose name it might or might not be. The author first meets him in the course of one of those mysterious visits to Belgium, the purpose of which is unclear even to himself. Austerlitz is just the sort of friend or acquaintance this particular author might value, to be encountered by chance in this bar, in that café, not with any definite sense of pleasure, but almost as a matter of course. Austerlitz will, without prevarication, divulge his life story, interspersed with accounts of his architectural studies, which, though real enough, have an air of the fantastical. Abandoned fortifications, deserted railway stations, earthworks, all apparently reached from Antwerp, or later, from the Mile End Road, feed both men's obsession with patterns, the tracery of glass domes, the logic of underground passages, the reality of which is attested by smudged photographs which appear to have survived from some album left over from the 1920s or 1930s. A doorway, a rock formation, a watch, a football team, inserted into the text with little attendant explanation, give sufficient grounding to the apparently depopulated world which both men inhabit.

But this method is recognisable, is even a trope. What is different is the story that Austerlitz gradually unfolds, in those bars and cafés, and later in his house in Alderney Street. Austerlitz is more than an exile; he is a survivor, though an impassive one. At the age of four and a half he was sent on a Kindertransport to safety in Wales and grew up in the chilly care of a pastor and his wife in Bala. He has suffered from hallucinatory anxiety states throughout his adult life, and in an attempt to supply himself with data — for he has no memory of the events which took place — returns to Prague, which he thinks was his home. By dint of archival research he recognises the name of his former nurse, whom he tracks down to an apartment in the Lesser Quarter. Although very old, Vera, the nurse, tells him that long ago his mother was informed that she might bring a few selected items to a depot before being embarked on a journey to a place of which she knows nothing. That place is Theresienstadt, a small town which once harboured a concentration camp. Austerlitz retraces her steps. It is, after all, another excursion, no more informative than the ones he has fashioned for himself.

I grew cold and sick reading this remarkable narrative, which embodies a sense of displacement so radical that it would seem to preclude a safe return to everyday existence. This is not vulgar Holocaust literature, still less a witness statement: this is dislocation of a kind most of us are privileged not to know. Austerlitz receives neither surcease nor consolation from his travails, merely a partial restoration of memories which remain piecemeal. There is no sense of duty done, of conclusions reached, but the illustrations in the text become less abstract. Faces are glimpsed, though these are partly obliterated, and in one image the face of a man in the foreground — neat, well-groomed — masks that of a woman wearing a necklace, so

indistinct as to suggest a revenant. This woman may or may not be Austerlitz's mother. It is the necklace that strikes a chord.

Recovery is only intermittent. In Paris a French friend brings him a book from her grandfather's library, a medical work designed for `toutes sortes de maladies, internes et externes, invett'rees et difficiles guerir'. Austerlitz delights in the remedies, which consist of infusions of peach blossom, eyebright and other plants. He sets off on another excursion, one nearer to hand, to the new Bibliotheque Nationale, the insane architecture of which nearly sends him off his head again but provides a postscript so ironic that it could not have been invented. This, and another postscript, though welcome, perhaps belong in another book. The body of the work is unforgettable. Like Andrei Makine's La Musique dune Vie, published earlier this year by Seuil, this is authentic European writing. Its strangeness is so convincing that one is obliged to recognise the truly phenomenal configuration of the author's mind. Even more striking is the blend of conscious and unconscious memory and observation that makes Austerlitz the most accomplished of Sebald's works.