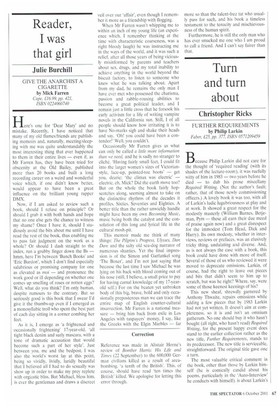 Reader, I was that girl

GIVE THE ANARCHIST A CIGARETTE by Mick Farren Cape, £16.99, pp. 421, ISBN 0224060740 Here's one for 'Dear Mary' and no mistake. Recently, I have noticed that many of my old flames/friends are publishing memoirs and, naturally, meeting/sleeping with me was quite understandably the most interesting thing that ever happened to them in their entire lives — even if, as Mr Farren has, they have been tried for obscenity at the Old Bailey, published more than 20 books and built a long recording career on a weird and wonderful voice which, if one didn't know better, would appear to have been a great influence on the brilliant young rapper DMX.

Now, if I am asked to review such a book, should I refuse on principle? Or should I grab it with both hands and hope that no one else gets the chance to witness my shame? Once I have it, should I studiously avoid the bits about me until I have read the rest of the book, thus enabling me to pass fair judgment on the work as a whole? Or should I dash straight to the index, run a grubby finger down the Bs — hmm, here I'm between 'Bunch Books' and 'Eric Burdon', which I don't find especially salubrious or promising company for one as elevated as moi — and pronounce the work good or ill depending on whether one comes up smelling of roses or rotten eggs? Well, what do you think? I'm only human, despite rumours to the contrary. But so seriously good is this book that I swear I'd give it the thumbs-up even if I emerged as a monosyllabic troll who spent the best part of each day sitting in a corner combing her feet.

As it is, I emerge as `a frightened and occasionally frightening' 17-year-old, 'all tight black denim and surly mascara, with a tone of dramatic accusation that would become such a part of her style'. Just between you, me and the bedpost, I was also the world's worst lay at this point, being so vividly, lividly, luridly beautiful that I believed all I had to do sexually was show up in order to make my prey replete with orgiastic bliss. But Michael, bless him, is ever the gentleman and draws a discreet veil over our 'affair', even though I remember it more as a friendship with flogging.

When Mr Farren wasn't whipping me to within an inch of my young life (an experience which. I remember thinking at the time with characteristic coarseness, was a right bloody laugh) he was instructing me in the ways of the world, and it was such a relief, after all those years of being viciously misinformed by parents and teachers about sex, drugs, and my total inability to achieve anything in the world beyond the biscuit factory, to listen to someone who knew what he was talking about. Apart from my dad, he remains the only man I have ever met who possessed the charisma, passion and rabble-rousing abilities to become a great political leader, and I remain just a little cross that he forsook his early activism for a life of writing vampire novels in the California sun. Still, I of all people should know how irritating it is to have No-marks sigh and shake their heads and say, 'Oh! you could have been a contender!' Well, you couldn't.

Occasionally Mr Farren gives us what can only be called a little mare information than we need, and he is sadly no stranger to cliché. 'Having fairly small feet, I could fit into the larger women's sizes of Victorianstyle, lace-up, pointed-toe boots' — get you, dearie; 'the climax was electric' — electric, eh, Mick? Did the earth move too? But on the whole the book fairly hopscotches along, seeming almost to take on the distinctive rhythms of the decades it profiles, Sixties, Seventies and Eighties. A better title than the rather unwieldy handle might have been my own Becoming Music, music being both the catalyst and the consolation of this long and lyrical life in the cultural mosh-pit.

This memoir made me think of many things: The Pilgrim's Progress, Ulysses, Dan Dare and the salty old sea-dog narrator of numerous shanties. Yet the final impression is of the Simon and Garfunkel song 'The Boxer', and I'm not just saying that because the last time I saw Michael he was lying on his back with blood coming out of his nose (still. I believe, a small price to pay for having carnal knowledge of my 17-yearold self.) For on the beaten yet unbroken body of this big, brave, bold and only occasionally preposterous man we can trace the entire map of English counter-cultural insurrection. Mr Farren is a national treasure — bring him back from exile in Los Angeles with taxpayers' money, I say, like the Greeks with the Elgin Marbles — far

Reference was made in Alistair Home's review of Bomber Harris: His Life and Times (22 September) to the 600,000 German civilians killed as a result of areabombing, 'a tenth of the British'. This, of course, should have read 'ten times the British' killed. We apologise for letting this error through. more so than the talent-free tat who usually pass for such, and his book a timeless testament to the tenacity and mischievousness of the human spirit.

Furthermore, he is still the only man who has ever smacked me one who I am proud to call a friend. And I can't say fairer than that.