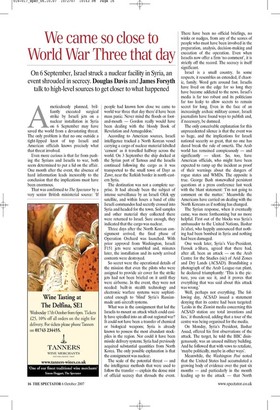 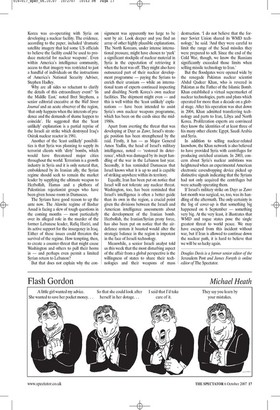 We came so close to World War Three that day

On 6 September, Israel struck a nuclear facility in Syria, an event shrouded in secrecy. Douglas Davis and James Forsyth talk to high-level sources to get closer to what happened Ameticulously planned, brilliantly executed surgical strike by Israeli jets on a nuclear installation in Syria on 6 September may have saved the world from a devastating threat. The only problem is that no one outside a tight-lipped knot of top Israeli and American officials knows precisely what that threat involved.

Even more curious is that far from pushing the Syrians and Israelis to war, both seem determined to put a lid on the affair. One month after the event, the absence of hard information leads inexorably to the conclusion that the implications must have been enormous.

That was confirmed to The Spectator by a very senior British ministerial source: 'If people had known how close we came to world war three that day there'd have been mass panic. Never mind the floods or footand-mouth — Gordon really would have been dealing with the bloody Book of Revelation and Armageddon.'

According to American sources, Israeli intelligence tracked a North Korean vessel carrying a cargo of nuclear material labelled 'cement' as it travelled halfway across the world. On 3 September the ship docked at the Syrian port of Tartous and the Israelis continued following the cargo as it was transported to the small town of Dayr as Zawr, near the Turkish border in north-eastern Syria.

The destination was not a complete surprise. It had already been the subject of intense surveillance by an Israeli Ofek spy satellite, and within hours a band of elite Israeli commandos had secretly crossed into Syria and headed for the town. Soil samples and other material they collected there were returned to Israel. Sure enough, they indicated that the cargo was nuclear.

Three days after the North Korean consignment arrived, the final phase of Operation Orchard was launched. With prior approval from Washington, Israeli F151 jets were scrambled and, minutes later, the installation and its newly arrived contents were destroyed.

So secret were the operational details of the mission that even the pilots who were assigned to provide air cover for the strike jets had not been briefed on it until they were airborne. In the event, they were not needed: built-in stealth technology and electronic warfare systems were sophisticated enough to 'blind' Syria's Russianmade anti-aircraft systems.

What was in the consignment that led the Israelis to mount an attack which could easily have spiralled into an all-out regional war? It could not have been a transfer of chemical or biological weapons; Syria is already known to possess the most abundant stockpiles in the region. Nor could it have been missile delivery systems; Syria had previously acquired substantial quantities from North Korea. The only possible explanation is that the consignment was nuclear.

The scale of the potential threat — and the intelligence methods that were used to follow the transfer — explain the dense mist of official secrecy that shrouds the event.

There have been no official briefings, no winks or nudges, from any of the scores of people who must have been involved in the preparation, analysis, decision-making and execution of the operation. Even when Israelis now offer a firm 'no comment', it is strictly off the record. The secrecy is itself significant.

Israel is a small country. In some respects, it resembles an extended, if chaotic, family. Word gets around fast. Israelis have lived on the edge for so long they have become addicted to the news. Israel's media is far too robust and its politicians far too leaky to allow secrets to remain secret for long. Even in the face of an increasingly archaic military censor, Israeli journalists have found ways to publish and, if necessary, be damned.

The only conceivable explanation for this unprecedented silence is that the event was so huge, and the implications for Israeli national security so great, that no one has dared break the rule of omerta. The Arab world has remained conspicuously — and significantly — silent. So, too, have American officials, who might have been expected to ramp up the incident as proof of their warnings about the dangers of rogue states and WMDs. The opposite is true. George Bush stonewalled persistent questions at a press conference last week with the blunt statement: `I'm not going to comment on the matter.' Meanwhile the Americans have carried on dealing with the North Koreans as if nothing has changed.

The Syrian response, when it eventually came, was more forthcoming but no more helpful. First out of the blocks was Syria's ambassador to the United Nations, Bashar Ja'afari, who happily announced that nothing had been bombed in Syria and nothing had been damaged.

One week later, Syria's Vice-President, Farouk a-Shara, agreed that there had, after all, been an attack — on the Arab Centre for the Studies (sic) of Arid Zones and Dry Lands (ACSAD). Brandishing a photograph of the Arab League-run plant, he declared triumphantly: 'This is the picture, you can see it, and it proves that everything that was said about this attack was wrong.'

Well, perhaps not everything. The following day, ACSAD issued a statement denying that its centre had been targeted: 'Leaks in the Zionist media concerning this ACSAD station are total inventions and lies,' it thundered, adding that a tour of the centre was being organised for the media.

On Monday, Syria's President, Bashar Assad, offered his first observations of the attack. The target, he told the BBC disingenuously, was an unused military building. And he followed that with vows to retaliate, 'maybe politically, maybe in other ways'.

Meanwhile, the Washington Post noted that the United States had accumulated a growing body of evidence over the past six months — and particularly in the month leading up to the attack — that North Korea was co-operating with Syria on developing a nuclear facility. The evidence, according to the paper, included 'dramatic satellite imagery that led some US officials to believe the facility could be used to produce material for nuclear weapons'. Even within America's intelligence community, access to that imagery was restricted to just a handful of individuals on the instructions of America's National Security Adviser, Stephen Hadley.

Why are all sides so reluctant to clarify the details of this extraordinary event? 'In the Middle East,' noted Bret Stephens, a senior editorial executive at the Wall Street Journal and an acute observer of the region, 'that only happens when the interests of prudence and the demands of shame happen to coincide'. He suggested that the 'least unlikely' explanation is a partial reprise of the Israeli air strike which destroyed Iraq's Osirak nuclear reactor in 1981.

Another of the 'least unlikely' possibilities is that Syria was planning to supply its terrorist clients with 'dirty' bombs, which would have threatened major cities throughout the world. Terrorism is a growth industry in Syria and it is only natural that, emboldened by its Iranian ally, the Syrian regime should seek to remain the market leader by supplying the ultimate weapon to Hezbollah, Hamas and a plethora of Palestinian rejectionist groups who have been given house-room in Damascus.

The Syrians have good reason to up the ante now. The Alawite regime of Bashar Assad is facing a slew of tough questions in the coming months — most particularly over its alleged role in the murder of the former Lebanese leader, Rafiq Hariri, and its active support for the insurgency in Iraq. Either of these issues could threaten the survival of the regime. How tempting, then, to create a counter-threat that might cause Washington and others to pull their horns in — and perhaps even permit a limited Syrian return to Lebanon?

But that does not explain why the consignment was apparently too large to be sent by air. Look deeper and you find an array of other highly plausible explanations. The North Koreans, under intense international pressure, might have chosen to 'park' a significant stockpile of nuclear material in Syria in the expectation of retrieving it when the heat was off. They might also have outsourced part of their nuclear development programme — paying the Syrians to enrich their uranium — while an international team of experts continued inspecting and disabling North Korea's own nuclear facilities. The shipment might even — and this is well within the 'least unlikely' explanations — have been intended to assist Syria's own nuclear weapons programme, which has been on the cards since the mid1980s.

Apart from averting the threat that was developing at Dayr as Zawr, Israel's strategic position has been strengthened by the raid. Firstly, it has — as Major General Amos Yadlin, the head of Israel's military intelligence, noted — 'restored its deterrence', which was damaged by its inept handling of the war in the Lebanon last year. Secondly, it has reminded Damascus that Israel knows what it is up to and is capable of striking anywhere within its territory.

Equally, Iran has been put on notice that Israel will not tolerate any nuclear threat. Washington, too, has been reminded that Israel's intelligence is often a better guide than its own in the region, a crucial point given the divisions between the Israeli and American intelligence assessments about the development of the Iranian bomb. Hezbollah, the Iranian/Syrian proxy force, has also been put on notice that the airdefence system it boasted would alter the strategic balance in the region is impotent in the face of Israeli technology.

Meanwhile, a senior Israeli analyst told us this week that the most disturbing aspect of the affair from a global perspective is the willingness of states to share their technologies and their weapons of mass destruction. 'I do not believe that the former Soviet Union shared its WMD technology,' he said. 'And they were careful to limit the range of the Scud missiles they were prepared to sell. Since the end of the Cold War, though, we know the Russians significantly exceeded those limits when selling missile technology to Iran.'

But the floodgates were opened wide by the renegade Pakistan nuclear scientist Abdul Qadeer Khan, who is revered in Pakistan as the Father of the Islamic Bomb. Khan established a virtual supermarket of nuclear technologies, parts and plans which operated for more than a decade on a global stage. After his operation was shut down in 2004, Khan admitted transferring technology and parts to Iran, Libya and North Korea. Proliferation experts are convinced they know the identities of at least three of his many other clients: Egypt, Saudi Arabia and Syria.

In addition to selling nuclear-related knowhow, the Khan network is also believed to have provided Syria with centrifuges for producing enriched uranium. In 2003, concern about Syria's nuclear ambitions was heightened when an experimental American electronic eavesdropping device picked up distinctive signals indicating that the Syrians had not only acquired the centrifuges but were actually operating them.

If Israel's military strike on Dayr as Zawr last month was surgical, so, too, was its handling of the aftermath. The only certainty in the fog of cover-up is that something big happened on 6 September — something very big. At the very least, it illustrates that WMD and rogue states pose the single greatest threat to world peace. We may have escaped from this incident without war, but if Iran is allowed to continue down the nuclear path, it is hard to believe that we will be so lucky again.

Douglas Davis is a former senior editor of the Jerusalem Post and James Forsyth is online editor of The Spectator.