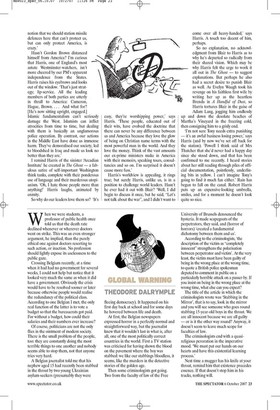 THEODORE DALRYMPLE When we were students, a professor of public health once told us that the death rate declined whenever or wherever doctors went on strike. This was an even stronger argument, he implied, than the purely ethical one against doctors resorting to such action, or inaction. No profession should lightly expose its uselessness to the public gaze.

Crossing Belgium recently, at a time when it had had no government for several weeks, I could not help but notice that it looked very much the same as when it did have a government. Obviously the crisis would have to be resolved sooner or later because otherwise people would realise the redundancy of the political class. According to one Belgian I met, the only real function of the latter is to vote a budget so that the bureaucrats got paid. For without a budget, how could their salaries and their numbers ever increase?

Of course, politicians are not the only flies in the ointment of modern society. There is the small problem of the people, too: they are constantly doing the most terrible things to one another and nobody seems able to stop them, not that anyone tries very hard.

A Belgian journalist told me that his nephew aged 15 had recently been stabbed in the throat by two young Ukrainian asylum-seekers (presumably they were www.spectator.co.uk fleeing democracy). It happened on his first day back at school and for some days he hovered between life and death.

At first, the Belgian newspapers expressed horror in a perfectly normal and straightforward way, but the journalist knew that it wouldn't last in what is, after all, one of the most politically correct countries in the world. First a TV station was criticised for having shown the blood on the pavement where the boy was stabbed: we like our stabbings bloodless, it seems, like the murders in the detective stories of the golden age.

Then some criminologists got going. Two from the faculty of law of the Free University of Brussels denounced the hysteria. It made scapegoats of the perpetrators, they said, and (horror of horrors) 'created a fundamental dichotomy between them and us'.

The title of the article in which the criminologists wrote was 'Stabbing in the Mirror', that is to say, look in the mirror and you will see someone who goes round stabbing 15-year-old boys in the throat. We are all innocent because we are all guilty — or is it the other way round? Anyway, it doesn't seem to leave much scope for faculties of law.

The criminologists end with a quasireligious peroration in the imperative mood. 'We must put our hands on our hearts and have this existential learning process.'

Next time a mugger has his knife at your throat, remind him that existence precedes essence. If that doesn't stop him in his tracks, nothing will.