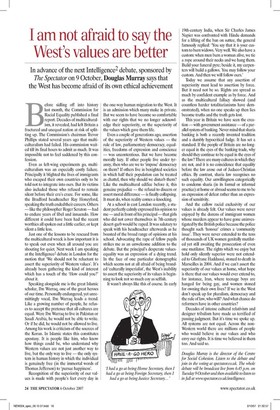 I am not afraid to say the West's values are better

In advance of the next Intelligence2 debate, sponsored by The Spectator on 9 October, Douglas Murray says that the West has become afraid of its own ethical achievement Before sidling off into history last month, the Commission for Racial Equality published a final report. Decades of multiculturalism, it revealed, had left Britain a fractured and unequal nation at risk of splitting up. The Commission's chairman Trevor Phillips stated several years ago that multiculturalism had failed. His commission waited till its final hours to admit as much. It was impossible not to feel saddened by this confession.

Even as left-wing experiments go, multiculturalism was an especially costly failure. Principally it blighted the lives of immigrants who escaped their own countries only to be told not to integrate into ours. But its victims also included those who refused to remain silent before their era's craze. For some, like the Bradford headteacher Ray Honeyford, speaking the truth ended their careers. Others — like the philosopher Roger Scruton — had to endure years of libel and innuendo. How different it could have been had the recent worthies all spoken out a little earlier, or kept silent a little less.

Just one of the lessons to be rescued from the multicultural wreck is how important it is to speak out even when all around you are shouting for quiet. Next week I am speaking at the Intelligence2 debate in London for the motion that 'We should not be reluctant to assert the superiority of Western values'. It's already been gathering the kind of interest which has a touch of the 'How could you?' about it.

Speaking alongside me is the great Islamic scholar, Ibn Warraq, one of the great heroes of our time. Personally endangered, yet unremittingly vocal, Ibn Warraq leads a trend. Like a growing number of people, he refuses to accept the pretence that all cultures are equal. Were Ibn Warraq to live in Pakistan or Saudi Arabia, he would not be able to write. Or if he did, he would not be allowed to live. Among his work is criticism of the sources of the Koran. In Islamic states this constitutes apostasy. It is people like him, who know how things could be, who understand why Western values are not just another way to live, but the only way to live — the only system in human history in which the individual is genuinely free (in the immortal words of Thomas Jefferson) to 'pursue happiness'.

Recognition of the superiority of our values is made with people's feet every day in the one-way human migration to the West. It is an admission which many make in private. But we seem to have become so comfortable with our rights that we no longer acknowledge their superiority, or the superiority of the values which gave them life.

Even a couple of generations ago, assertion of the superiority of Western values — the rule of law, parliamentary democracy, equalities, freedoms of expression and conscience — was uncontentious. But we have become morally lazy. If other people live under tyranny, then who are we to 'impose' democracy on them? If others live in benighted societies in which half their population can be treated as chattel, then why should we disturb them? Like the multicultural edifice before it, this genuine prejudice — the refusal to discern or assert moral difference — is finally collapsing. It must do, when reality comes a-knocking.

At a school in east London recently, a student perfectly calmly expressed his opinion to me — and in front of his principal — that girls who did not cover themselves in 7th-century desert-garb would be raped. It was salutary to speak with his headteacher afterwards as he boasted of the broad range of opinions at his school. Advocating the rape of fellow pupils strikes me as an unwelcome addition to the debate. But the principal's desperate valuesequality was an expression of a dying trend. In the face of one particular demographic which seems not at all afraid of being branded 'culturally imperialist', the West's inability to assert the superiority of its values is beginning to look not so much coy as selfish.

It wasn't always like this of course. In early 19th-century India, when Sir Charles James Napier was confronted with Hindu demands for a lifting of the ban on suttee, the general famously replied: 'You say that it is your custom to burn widows. Very well. We also have a custom: when men bum a woman alive, we tie a rope around their necks and we hang them. Build your funeral pyre; beside it, my carpenters will build a gallows. You may follow your custom. And then we will follow ours.'

Today we assume that any assertion of superiority must lead to assertion by force. But it need not be so. Rights are spread as much by confident example as by force. And as the multicultural fallacy showed (and countless harder totalitarianisms have demonstrated), when no one speaks up then lies become truths and the truth gets lost.

This year in Britain we have seen the creation — with government assistance — of a parallel system of banking. Never mind that sharia banking is both a recently invented tradition and a dumbly hypocritical fudge. It has set a standard. If the people of Britain are no longer equal in the eyes of the banking trade, why should they continue to be equal in the eyes of the law? There are many cultures in which they are not, and it is no coincidence that equality before the law arose out of Judaeo-Christian ethics. By contrast, sharia law recognises no such equality. Our unwillingness categorically to condemn sharia (in its formal or informal practice) at home or abroad seems to me to be an expression of defeat rather than an expression of sensitivity.

And the callow racial exclusivity of our values is already felt. Our values were never enjoyed by the dozens of immigrant women whose murders appear to have gone uninvestigated by the British police because the police thought such 'honour' crimes a 'community issue'. They were never extended to the tens of thousands of UK women genitally mutilated yet still awaiting the prosecution of even one mutilator. The rights which we enjoy but hold only silently superior were not extended to Ghofrane Haddaoui, stoned to death in Marseilles in 2004. And if we can't assert the superiority of our values at home, what hope is there that our values would ever extend to, for instance, Iran, where teenage boys are hanged for being gay, and women stoned for owning their own lives? If we in the West don't speak up for pluralism, democracy and the rule of law, who will? And what chance do reformers have in other countries?

Decades of intense cultural relativism and designer tribalism have made us terrified of passing judgment. But it's time we spoke up. All systems are not equal. Across the nonWestern world there are millions of people who would believe in our values and who envy our rights. It is time we believed in them too. And said so.

Douglas Murray is the director of the Centre for Social Cohesion. Listen to the debate and join in the voting at spectatmco.uk. The whole debate will be broadcast live from 6.45 p.m. on Tuesday 9 October and then available to listen to in full at www.spectator.co.uktintelligence.