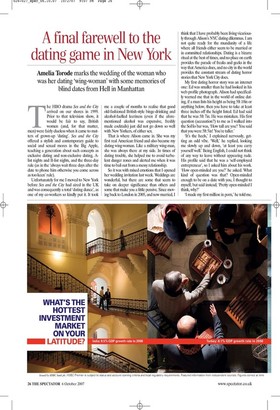 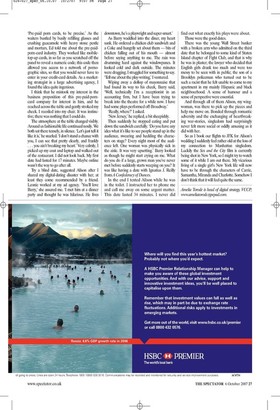 A final farewell to the dating game in New York

Amelia Torode marks the wedding of the woman who was her dating 'wing-woman' with some memories of blind dates from Hell in Manhattan The HBO drama Sac and the City arrived on our shores in 1999. Prior to that television show, it would be fair to say, British women (and, for that matter, men) were fairly clueless when it came to matters of grown-up 'dating'. Sex and the City offered a stylish and contemporary guide to social and sexual mores in the Big Apple, teaching a generation about such concepts as exclusive dating and non-exclusive dating, Alist nights and B-list nights, and the three-day rule (as in the 'always wait three days after the date to phone him otherwise you come across as too keen' rule).

Unfortunately for me I moved to New York before Sex and the City had aired in the UK and was consequently a total 'dating dunce', as one of my co-workers so kindly put it. It took me a couple of months to realise that good old-fashioned British-style binge-drinking and alcohol-fuelled leeriness (even if the aforementioned alcohol was expensive, freshly made cocktails) just did not go down so well with New Yorkers, of either sex.

That is where Alison came in. She was my first real American friend and also became my dating wing-woman. Like a military wing-man, she was always there at my side. In times of dating trouble, she helped me to avoid turbulent danger zones and alerted me when it was time to bail out from a messy relationship.

So it was with mixed emotions that I opened her wedding invitation last week. Weddings are wonderful, but there are some that seem to take on deeper significance than others and some that make you a little pensive. Since moving back to London in 2005, and now married, I think that I have probably been living vicariously through Alison's NYC dating dilemmas. I am not quite ready for the mundanity of a life where all friends either seem to be married or in committed relationships Dating is a bizarre ritual at the best of times, and no place on earth provides the parade of freaks and geeks in the way that America does, and no city in the world provides the constant stream of dating horror stories that New York City does.

My first dating horror story was an internet one: Ed was smaller than he had looked in his web-profile photograph. Alison had specifically warned me that in the world of online dating, if a man lists his height as being 5ft 10in or anything below, then you have to take at least three inches off the height listed. Ed had said that he was 5ft 7in. He was mistaken. His first question (accusation?) to me as I walked into the SoHo bar was, 'How tall are you? You said that you were 5ft Sin! You're taller.'

'It's the heels,' I explained nervously, getting an odd vibe. 'Well,' he replied, looking me slowly up and down, 'at least you carry yourself well.' Being English, I could not think of any way to leave without appearing rude. His profile said that he was a 'self-employed entrepreneur', so I asked him about his work. 'How open-minded are you?' he asked. What kind of question was that? Open-minded enough to be on a date with you, I thought to myself, but said instead, 'Pretty open-minded I think, why?'

I think that he mistook my interest in the business proposition of this pre-paid-porncard company for interest in him, and he reached across the table and gently stroked my cheek. I recoiled into my chair. It was instinctive; there was nothing that I could do.

The atmosphere at the table changed visibly. Around us fashionable life continued nosily. We both sat there tensely, in silence. 'Let's just tell it like it is,' he snarled. 'I don't stand a chance with you, I can see that pretty clearly, and frankly . . . you ain't breaking my heart.' Very calmly, I picked up my coat and laptop and walked out of the restaurant. I did not look back. My first date had lasted for 17 minutes. Maybe online wasn't the way to go after all.

Try a blind date, suggested Alison after I shared my digital-dating disaster with her; at least they come recommended by a friend. Leonie worked at my ad agency. 'You'll love Bany,' she assured me. 'I met him at a dinner party and thought he was hilarious. He lives downtown, he's a playwright and super-smart.'

As Barry waddled into the diner, my heart sank. He ordered a chicken club sandwich and a Coke and hungrily set about them — bits of chicken falling out of his mouth — almost before saying anything to me. The rain was drumming hard against the windowpanes. It looked cold and dark outside. The minutes were dragging; I struggled for something to say. 'Tell me about the play-writing,' I ventured.

Wiping away a dollop of mayonnaise that had found its way to his cheek, Barry said, 'Well, technically I'm a receptionist in an accounting firm, but I have been trying to break into the theatre for a while now. I have had some plays performed off-Broadway.'

Then suddenly he stopped eating and put down the sandwich carefully. Do you have any idea what it's like to see people stand up in the audience, swearing and heckling the characters on stage? Every night most of the audience left. One woman was physically sick in the aisle. It was very upsetting.' Barry looked as though he might start crying on me. What do you do if a large, grown man you've never met before suddenly starts weeping on you? It was like having a date with Ignatius J. Reilly fi-omA Confederacy of Dunces.

In the end I texted Alison while he was in the toilet. I instructed her to phone me and call me away on some urgent matter. This date lasted 34 minutes. I never did find out what exactly his plays were about. Those were the good dates.

There was the young Wall Street banker with a broken arm who admitted on the third date that he belonged to some kind of Staten Island chapter of Fight Club, and that is why he was in plaster; the lawyer who decided that English girls drank too much and were too messy to be seen with in public; the son of a Brooklyn policeman who turned out to be such a racist that he felt unable to come to my apartment in my mainly Hispanic and black neighbourhood. A sense of humour and a sense of perspective were essential.

And through all of them Alison, my wingwoman, was there to pick up the pieces and help me move on. Bonded through romantic adversity and the exchanging of heartbreaking war-stories, singledom had surprisingly never felt more social or oddly amusing as it did with her.

So as I book our flights to JFK for Alison's wedding I suddenly feel rather old at the loss of my connection to Manhattan singledom. Luckily the Sex and the City film is currently being shot in New York, so I might try to watch some of it while I am out there. My vicarious living of a single girl's New York life will now have to be through the characters of Carrie, Samantha, Miranda and Charlotte. Somehow I don't think that it will feel quite the same.