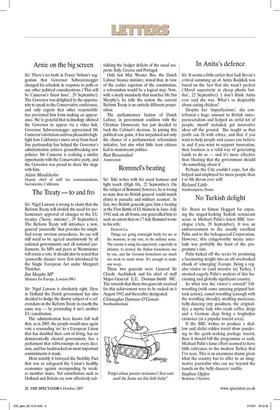 Sir: Bravo to Simon Hoggart for exposing the staged-looking Turkish restaurant scene in Michael PalM's latest BBC travelogue (Arts, 29 September). It was an embarrassment to the usually excellent PalM and to the beleaguered Corporation. However, this cringeworthy mezze interlude was probably the least of the programme's sins.

PalM kicked off the series by promising a fascinating insight into an oft-overlooked chunk of 'emerging' Europe. Being a regular visitor to (and investor in) Turkey, I awaited eagerly PalM's analysis of this fascinating and globally significant country.

So what was the viewer's reward? Oilwrestling (with some amusing gripped buttock action), camel-wrestling (enough with the wrestling already), strolling musicians, belly-dancing (my goodness, the originality), a mystic lady who reads coffee dregs and a German chap living a troglodyte existence (in a popular tourist area).

If the BBC wishes to produce a shallow and cliché-ridden travel show pandering to the quirk-seeking package tourist, then it should bill the programme as such. Michael PalM's lame effort seemed to have little relevance to the modern Turkey that I've seen. This is an enormous shame given what the country has to offer to an imaginative journalist who can see beyond the tassels on the belly-dancers' outfits.