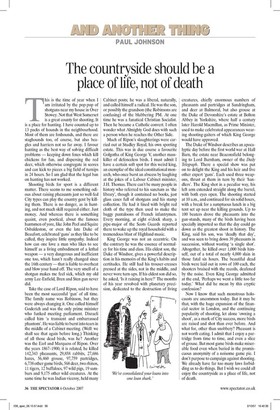 The countryside should be a place of life, not of death

PAUL JOHNSON This is the time of year when I am irritated by the pop-pop of shotguns near my house in Over Stowey. Not that West Somerset is a great county for shooting. It is a place for hunting. I have counted up to 13 packs of hounds in the neighbourhood. Most of them are foxhounds, and there are staghounds too, of course, but also beagles and harriers not so far away. I favour hunting as the best way of solving difficult problems — keeping down foxes which kill chickens for fun, and dispersing the red deer, which otherwise congregate in scores and can kick to pieces a big field of turnips in 24 hours. So I am glad that the legal ban on hunting has not worked.

Shooting birds for sport is a different matter. There seems to me something odious about raising pheasants just so well-fed City types can play the country gent by killing them. There is no danger, as in hunting, and not much skill required either. Just money. And whereas there is something quaint, even poetical, about the famous huntsmen of yore, like John Peel and Squire Osbaldeston, or even the late Duke of Beaufort, celebrated 'guns' as they like to be called, they inspire little sympathy. Indeed how can one love a man who likes to see himself as a living embodiment of a lethal weapon — a very dangerous and inefficient one too, which hasn't really changed since the 16th century — that is liable to overheat and blow your hand off. The very smell of a shotgun makes me feel sick, which my old army Lee-Enfield, Bren and Sten gun never did.

Take the case of Lord Ripon, said to have been the most successful 'gun' of all time. The family name was Robinson, but they were always changing it. One called himself Goderich and was the only prime minister who funked meeting parliament. Disraeli called him 'a transient and embarrassed phantom'. He was liable to burst into tears in the middle of a Cabinet meeting. (Well: we shall see that again before long.) Thinking of all those dead birds, was he? Another was the Earl and Marquess of Ripon. Over the years 1867-1900, it is related, he killed 142,343 pheasants, 29,858 rabbits, 27,686 hares, 56,460 grouse, 97,759 partridges, 6,738 other game birds, 568 deer, two rhinos, 11 tigers, 12 buffaloes, 97 wild pigs, 19 samburs and 9,175 other wild creatures. At the same time he was Indian viceroy, held many Cabinet posts; he was a liberal, naturally, and called himself a radical. He was the son, or possibly the grandson (the Robinsons are confusing) of the blubbering PM. At one time he was a fanatical Christian Socialist. Then he became a Catholic convert. I often wonder what Almighty God does with such a person when he reaches the Other Side.

Much of Ripon's slaughterings were carried out at Studley Royal, his own sporting estate. This was in due course a favourite Golgotha of King George V, another masskiller of defenceless birds. I must admit I have a certain soft spot for this weird king, an exemplar of the ideal constitutional monarch, who once burst an abscess by laughing at the jokes of a Labour Cabinet minister, J.H. Thomas. There can't be many people in history who referred to his sanctum as 'the library', though it contained no books, just glass cases full of shotguns and his stamp collection. He had it lined with bright red cloth of the type then used to make the baggy pantaloons of French infantrymen. Every morning, at eight o'clock sharp, a pipe-major of the Scots Guards reported there to wake up the royal household with a tremendous blast of Highland music.

King George was not an eccentric. On the contrary he was the essence of normalcy for his time and class. His eldest son, the Duke of Windsor, gives a powerful description in his memoirs of the King's habits and certitudes. He still had his trouser-creases pressed at the sides, not in the middle, and never wore turn-ups. If his eldest son did so, he asked, 'Is it raining in here?' The months of his year revolved with planetary precision, dedicated to the destruction of living creatures, chiefly enormous numbers of pheasants and partridges at Sandringham, and deer at Balmoral, but also grouse at the Duke of Devonshire's estate at Bolton Abbey in Yorkshire, where half a century later Harold Macmillan, as Prime Minister, used to make celebrated appearances wearing shooting-gaiters of which King George would have approved.

The Duke of Windsor describes an apocalyptic day before the first world war at Hall Barn, the estate near Beaconsfield belonging to Lord Burnham, owner of the Daily Telegraph. There a special show was put on to delight the King and his heir and five other expert 'guns'. Each used three weapons, thrust at them in turn by their 'handlers'. The King shot in a peculiar way, his left arm extended straight along the barrel, with both eyes open. The shooting started at 10 a.m., and continued for six solid hours, with a break for a sumptuous lunch in a big tent set up near the killing grounds. Up to 100 beaters drove the pheasants into the gun-stands, many of the birds having been specially imported so that the day could go down as the greatest shoot in history. The King, said his son, was 'deadly that day', and was seen to bring down 39 pheasants in succession, without wasting 'a single shot'. Altogether, he killed over 1,000 birds himself, out of a total of nearly 4,000 slain in those fatal six hours. The beautiful dead birds were laid out in rows of 100 each, the shooters bruised with the recoils, deafened by the noise. Even King George admitted at the end, 'Perhaps we went a little too far today.' What did he mean by this cryptic confession?

Now I know that such monstrous holocausts are uncommon today. But it may be that, with the huge expansion of the financial sector in London, and the continuing popularity of shooting, let alone 'owning a shoot', as a mark of City success, more birds are raised and shot than ever before. And what for, other than snobbery? Pheasant is not worth eating. I admit that I enjoy a partridge from time to time, and even a slice of grouse. But most game birds make miserable food even when buried in the promiscuous anonymity of a noisome game pie. I don't purpose to campaign against shooting. We already have far too many laws forbidding us to do things. But I wish we could all enjoy the countryside as a place of life, not of death.