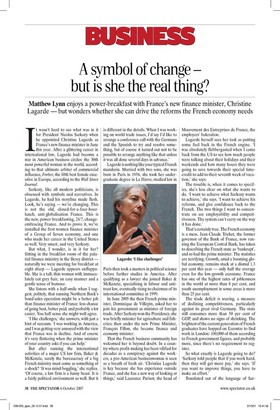 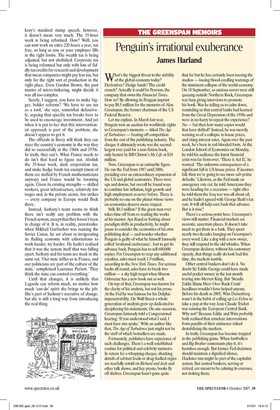 A symbol of change but is she the real thing?

Matthew Lynn enjoys a power-breakfast with France's new finance minister, Christine Lagarde — but wonders whether she can drive the reforms the French economy needs 1 t wasn't hard to see what was in it for President Nicolas Sarkozy when he appointed Christine Lagarde as France's new finance minister in June this year. After a glittering career in international law, Lagarde had become a star in American business circles: the 30th most powerful woman in the world, according to that ultimate arbiter of commercial influence, Forbes; the fifth best female executive in Europe, according to the Wall Street Journal.

Sarkozy, like all modern politicians, is obsessed with symbols and narratives. In Lagarde, he had his storyline made flesh. Look, he's saying — we're changing. This is not the old, closed-for-a-four-hourlunch, anti-glob alisation France. This is the new, power-breakfasting, 24/7, changeembracing France. And to prove it, we've installed the first women finance minister of a Group of Seven economy, and one who made her career in the United States as well. Very smart, and very Sarkozy.

But what, I wonder, is in it for her? Sitting in the breakfast room of the palatial finance ministry in the Bercy district — naturally we were meeting for breakfast at eight sharp — Lagarde appears unflappable. She is a tall, thin woman with immaculately cut grey hair, an easy manner and a gentle sense of humour.

She listens with a half-smile when I suggest, politely, that running Northern Rock's bond-sales operation might be a better job than finance minister of France: less chance of going bust, better paid, and probably a lot easier. You half sense she might well agree.

'I like challenges,' she answers, with just a hint of sarcasm. 'I was working in America, and I was getting very annoyed with the view that France was in decline. And of course it's very flattering when the prime minister of your country asks if you can help.'

But after running the international activities of a major US law firm, Baker & McKenzie, surely the bureaucracy of a big French ministry must come as something of a shock? 'It was mind-boggling,' she replies. 'Of course, a law firm is a funny beast. It is a fairly political environment as well. But it is different in the details. When I was working on world trade issues, I'd say I'd like to arrange a conference call with the Germans and the Spanish to try and resolve something, but of course it turned out not to be possible to arrange anything like that unless it was all done several days in advance.'

Lagarde is nothing like your typical French mandarin. Married with two sons, she was born in Paris in 1956; she took her undergraduate degree in Le Havre, studied law in Paris then took a masters in political science before further studies in America. After qualifying as a lawyer she joined Baker & McKenzie, specialising in labour and antitrust law, eventually rising to chairman of its international committee in 1999.

In June 2005 the then French prime minister, Dominique de Villepin, asked her to join his government as minister of foreign trade. After Sarkozy won the Presidency, she was briefly minister for agriculture and fisheries; then under the new Prime Minister, Francois Fillon, she became finance and economy minister.

That the French business community has welcomed her is beyond doubt. In a country where profit-making has been vilified for decades as a conspiracy against the workers, a pro-American businesswoman is seen as a breath of fresh air. 'Christine Lagarde is key because she has experience outside France, and she has a new way of looking at things,' said Laurence Parisot, the head of Mouvement des Entreprises de France, the employers' federation.

Lagarde herself sees her task as putting some fuel back in the French engine. 'I was absolutely flabbergasted when I came back from the US to see how much people were talking about their holidays and their weekends and how many hours they were going to save towards their special timecredit to add to their seventh week of vacation,' she says.

The trouble is, when it comes to specifics, she's less clear on what she wants to do. 'I want to achieve what Sarkozy wants to achieve,' she says. 'I want to achieve his reforms, and give confidence back to the French. The two things I want to concentrate on are employability and competitiveness. The system can't carry on the way it has done.'

That's certainly true. The French economy is a mess. Jean-Claude Trichet, the former governor of the Bank of France, now running the European Central Bank, has taken to describing the French state as 'bankrupt', and so had the prime minister The statistics are terrifying. Growth, amid a booming global economy, remains stuck at a dismal 1.3 per cent this year — only half the average even for the low-growth eurozone. France has one of the highest rates of joblessness in the world at more than 8 per cent, and youth unemployment in some areas is more than 25 per cent.

The trade deficit is soaring, a measure of declining competitiveness, particularly against its great rival Germany. The state still consumes more than 50 per cent of GDP, and shows no signs of shrinking. The brightest of the current generation of French graduates have hopped on Eurostar to find work in London: 100,000 of them according to French government figures, and probably more, since there's no requirement to register.

So what exactly is Lagarde going to do? `Sarkozy told people that if you work hard, then they will get more pay,' she says. `If you want to improve things, you have to make an effort.'

Translated out of the language of Sarkozy's standard stump speech, however, it doesn't mean very much. The 35-hour week is being reformed. How? Well, you can now work an extra 220 hours a year, tax free, so long as you or your employer fills in the right forms. The wealth tax is being adjusted, but not abolished. Corporate tax is being reformed but only with lots of fiddly tax credits for research and development that mean companies might pay less tax, but only for the right sort of production in the right place. Even Gordon Brown, the past master of micro-tinkering, might decide it was all too complex.

Surely, I suggest, you have to make bigger, bolder reforms? 'We have to use tax as a tool,' she says, somewhat defensively, arguing that specific tax breaks have to be used to encourage investment. And yet when it is put to her that this interventionist approach is part of the problem, she doesn't appear to get it.

The officials in Bercy still think they can steer the country's economy in the way they did so successfully in the 1960s and 1970s. In truth, they can't. What France needs to do isn't that hard to figure out. Abolish the 35-hour week, slash corporation tax, and make hedge funds tax exempt (most of them are staffed by French mathematicians anyway) and France would be booming again. Given its existing strengths — skilled workers, great infrastructure, relatively low wages and, in the private sector, few strikes — every company in Europe would flock there.

Instead, Sarkozy's team seems to think there isn't really any problem with the French system, except that they haven't been in charge of it. It is, in reality, perestroika: when Mikhail Gorbachov was running the Soviet Union, he set about re-invigorating its flailing economy with exhortations to work harder, try harder. He hadn't realised that it was the system itself that was falling apart. Sarkozy and his team are stuck in the same rut. 'Our state stifles us in France, and our politicians are part of the culture of the state,' complained Laurence Parisot. 'They think the state can control everything.'

Until that changes, it is unlikely that Lagarde can reform much, no matter how much 'can-do' spirit she brings to the job. She's part of Sarkozy's narrative of change: but she is still a long way from introducing the real thing.