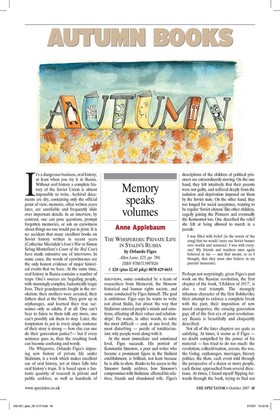 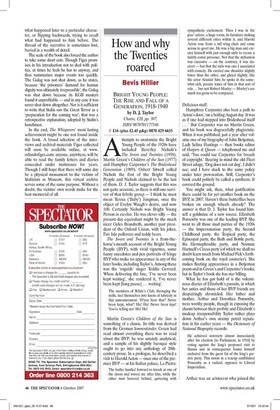 Anne Applebaum THE WHISPERERS: PRIVATE LIFE IN STALIN'S RUSSIA by Orlando Figes Allen Lane, £25, pp. 784, ISBN 9780713997026 © £20 (plus £2.45 p&p) 0870 429 6655 1 t's a dangerous business, oral history, at least when you try it in Russia. Without oral history a complete history of the Soviet Union is almost impossible to write. Archival documents are dry, containing only the official point of view; memoirs, often written years later, are unreliable and frequently slide over important details. In an interview, by contrast, one can pose questions, prompt forgotten memories, or ask an eyewitness about things no one would put in print. It is no accident that many excellent books on Soviet history written in recent years (Catherine Merridale's Ivan 's War or Simon Sebag-Montefiore's Court of the Red Czar) have made extensive use of interviews. In some cases, the words of eyewitnesses are the only honest evidence of major historical events that we have. At the same time, oral history in Russia contains a number of traps. One's sources are beguiling people, with stunningly complex, fantastically tragic lives. Their grandparents fought in the revolution; their mothers were arrested; their fathers died at the front. They grew up in orphanages, and learned their true surnames only as adults, if at all. One can't bear to listen to them talk any more, one can't possibly ask them to stop. Later, the temptation to put in every single sentence of their story is strong — how else can one do their generation justice?— but if every sentence goes in, then the resulting book can become confusing and wordy.

The Whisperers, Orlando Figes's imposing new history of private life under Stalinism, is a work which makes excellent use of oral history, yet at times falls into oral history's traps. It is based upon a fantastic quantity of research in private and public archives, as well as hundreds of interviews, some conducted by a team of researchers from Memorial, the Moscow historical and human rights society, and some conducted by Figes himself. The goal is ambitious: Figes says he wants to write not about Stalin, but about the way that Stalinism entered people's minds and emotions, affecting all their values and relationships'. He wants, in other words, to solve the most difficult — and, at one level, the most disturbing — puzzle of totalitarianism: why people went along with it.

At the most immediate and emotional level, Figes succeeds. His portrait of Konstantin Simonov, a poet and writer who became a prominent figure in the Stalinist establishment, is brilliant, not least because he is able to show, thanks to his access to the Simonov family archives, how Simonov's compromises with Stalinism affected his relatives, friends and abandoned wife. Figes's descriptions of the children of political prisoners are extraordinarily moving. On the one hand, they felt intuitively that their parents were not guilty, and suffered deeply from the isolation and deprivation imposed on them by the Soviet state. On the other hand, they too longed for social acceptance, wanting to be regular 'Soviet citizens' like other children, eagerly joining the Pioneers and eventually the Komsomol too. One described the relief she felt at being allowed to march in a parade: I was filled with belief [in the words of the song] that we would 'carry our Soviet banner over worlds and centuries'. I was with everyone! My friends and teachers once again believed in me — and that meant, or so I thought, that they must also believe in my parents' innocence.

Perhaps not surprisingly, given Figes's past work on the Russian revolution, the first chapter of the book, 'Children of 1917', is also a real triumph. The strangely inhuman character of the first Bolsheviks; their attempt to enforce a complete break with the past; their imposition of new moral categories; the ensuing generation gap; all of the first era of post-revolutionary Russia is beautifully and eloquently described.

Not all of the later chapters are quite as satisfying. At times, it seems as if Figes — no doubt compelled by the power of his material — has tried to do too much: the revolution, collectivisation, arrests, the war, the Gulag, orphanages, marriages, literary politics, the thaw, each event told through the perspective of a dozen or more people, each theme approached from several directions. At times, I found myself flipping forwards through the book, trying to find out what happened later to a particular character, or flipping backwards, trying to recall what had happened to him before. The thread of the narrative is sometimes lost, buried in a wealth of detail.

The scale of the book also forced the author to take some short cuts. Though Figes promises in his introduction not to deal with politics, at times he feels he has to anyway, and thus summarises major events too quickly. The Gulag was not shut down, as he states, because `the prisoners' demand for human dignity was ultimately irrepressible', the Gulag was shut down because its KGB masters found it unprofitable — and in any case it was never shut down altogether. Nor is it sufficient to write that Stalin saw the Great Terror as a 'preparation for the coming war'; that was a retrospective explanation, adopted by Stalin's henchmen.

In the end, The Whisperers' most lasting achievement might be one not found inside the book. A broad selection of the interviews and archival materials Figes collected will soon be available online, at www. orlandofiges.com: anyone, anywhere, will be able to read the family letters and diaries concealed under mattresses for years. Though I still hope that there will some day be a physical monument to the victims of Stalinism in Moscow, this virtual archive serves some of the same purpose. Without a doubt, the victims' own words make for the best memorial of all.