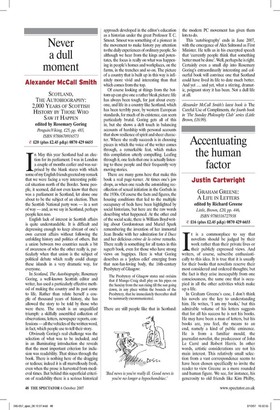 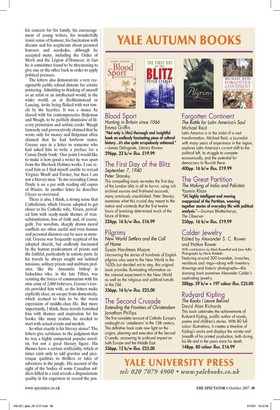 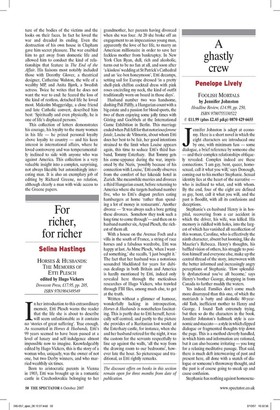 Justin Cartwright GRAHAM GREENE: A LIFE IN LETTERS edited by Richard Greene Little, Brown, £20, pp. 446, ISBN 9780316727938 © £16 (plus £2.45 p&p) 0870 429 6655 1 t is a commonplace to say that novelists should be judged by their work rather than their private lives or their publicly expressed views. And writers, of course, subscribe enthusiastically to this idea. It is true that it is usually for their books that novelists reserve their most considered and ordered thoughts; but the fact is they arise inescapably from one consciousness, the same one that is occupied in all the other activities which make up a life.

In Graham Greene's case, I don't think his novels are the key to understanding him He writes, 'I am my books,' but this admirable volume of his letters suggests that for all his success he is not his books. He may have been a man of letters, but his books are, you feel, the means to an end, namely a kind of public eminence. He is from a familiar mould, the journalist-novelist, the predecessor of John Le Carre and Robert Harris. In other words, artistic considerations are not his main interest. This relatively small selection from a vast correspondence seems to have been chosen specifically to invite the reader to view Greene as a more rounded and human figure. We see, for instance, his generosity to old friends like Kim Philby, his concern for his family, his encouragement of young writers, his wonderfully ironic sense of humour, his fascination with dreams and his scepticism about personal honours and accolades, although he accepted many, including the Order of Merit and the Legion d'Honneur; in fact he is sometimes found to be threatening to give one or the other back in order to apply political pressure.

The letters also demonstrate a very recognisable public school distaste for artistic posturing. Admitting to thinking of oneself as an artist or an intellectual would, in the wider world, as at Berkhamstead or Lancing, invite being flicked with wet towels by the hearties. It was a stance he shared with his contemporaries Betjeman and Waugh, to be publicly dismissive of literary pretension and artistic credo. Waugh famously and provocatively claimed that he wrote only for money and Betjeman often claimed that he had lowbrow tastes. Greene says in a letter to someone who had asked him to write a preface for a Conan Doyle book: 'One point I would like to make is how good a writer he was apart from the Sherlock Holmes works. I can reread him as I find myself unable to reread Virginia Woolf and Forster, but then I am not a literary man.' To me rereading Conan Doyle is on a par with reading old copies of Wisden. In another letter he describes Ulysses as overrated.

There is also, I think, a strong sense that Catholicism, which Greene adopted to get closer to his Catholic wife, Vivien, provided him with ready-made themes of transubstantiation, loss of faith and, of course, guilt. For novelists, sharply drawn moral conflicts are often useful and even human and personal disasters can be seen as material. Greene was frequently sceptical of his adopted church, but endlessly fascinated by the human predicament of priests and the faithful, particularly in remote parts. In his travels he always sought out isolated missions, solitary priests and stubborn prelates, like the Annamite bishop in Indochina who, in the late Fifties, was resisting the forces of communism with his own army of 2,000 believers. Greene's travels provided him with, as the letters make explicitly clear, an escape from domesticity, which seemed to him to be the worst expression of middle-class life. But more importantly, I think, these travels furnished him with themes and inspiration for his books: like many realists, he needed to start with actual events and models.

So what exactly is his literary status? The letters give substance to the judgment that he was a highly competent popular novelist, but not a great literary figure. His themes have a certain artificiality, which at times exist only to add gravitas and picaresque qualities to thrillers or tales of adventure in the jungle. His account of the sight of the bodies of some Canadian soldiers killed in a raid reveals a dispassionate quality in his eagerness to record the posture of the bodies of the victims and the looks on their faces. In fact he loved the war and dreaded its ending. Even the destruction of his own house in Clapham gave him secret pleasure. The war enabled him to get away from domestic life and allowed him to conduct the kind of relationships that feature in The End of the Affair. His liaisons most notably included those with Dorothy Glover, a theatrical designer, Catherine Walston, the wife of a wealthy MP, and Anita Bjcirk, a Swedish actress. Twice he writes that he does not want the war to end: he feared the loss of the kind of restless, detached life he loved most. Malcolm Muggeridge, a close friend and late Catholic convert, described him best: 'Spiritually and even physically, he is one of life's displaced persons.'

This collection of letters demonstrates his courage, his loyalty to the many women in his life — he prized personal loyalty above loyalty to country — and his keen interest in international affairs, where he loved controversy and was temperamentally inclined to side with anyone who was against America. This collection is a very valuable insight into a complex, surprising, not always likeable but astonishingly interesting man. It is also an exemplary job of editing by Richard Greene, no relation, although clearly a man with wide access to the Greene papers.