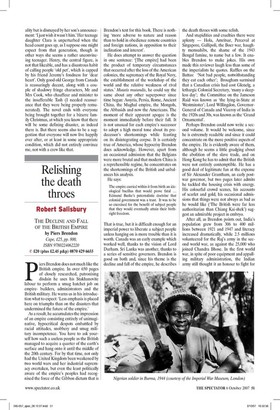 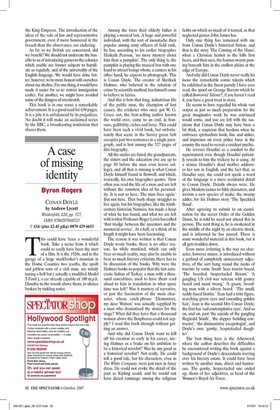 Robert Salisbury THE DECLINE AND FALL OF THE BRITISH EMPIRE by Piers Brendon Cape, £25, pp. 800, ISBN 9780224062220 £20 (plus £2.45 p&p) 0870 429 6655 piers Brendon does not much like the British empire. In over 650 pages of closely researched, patronising disdain he uses his Stakhanovite labour to perform a smug hatchet job on empirebuilders, administrators and the British military. He warns us in his introduction what to expect: 'Less emphasis is placed here on triumphs than on the disasters that undermined the future of the empire.'

As a result, he accumulates the impression of an empire consisting entirely of unimaginative, hypocritical despots embattled by racial attitudes, snobbery and smug military incompetence. You have to ask yourself how such a useless people as the British managed to acquire a quarter of the earth's surface and hang onto it until the middle of the 20th century. For by that time, not only had the United Kingdom been weakened by two world wars and her industrial supremacy overtaken, but even the least politically aware of the empire's peoples had recognised the force of the Gibbon dictum that is Brendon's text for this book. There is nothing 'more adverse to nature and reason than to hold in obedience remote countries and foreign nations, in opposition to their inclination and interest'.

He does attempt to answer the question in one sentence: '[The empire] had been the product of temporary circumstances that occurred after the loss of the American colonies, the supremacy of the Royal Navy, the establishment of the workshop of the world and the relative weakness of rival states.' Mutatis mutandis, he could say the same about any other superpower since time began: Assyria, Persia, Rome, Ancient China, the Mughal empire, the Mongols, the Abbasids and now the Americans. The moment of their apparent apogee is the moment immediately before their fall. It is not unusual for each empire's successor to adopt a high moral tone about its predecessor's shortcomings while feasting on its disintegrating corpse. It is certainly true of America, whose hypocrisy Brendon does acknowledge. However, apart from an occasional admission that the Belgians were more brutal and that modern China is a reprehensible regime, he concentrates on the shortcomings of the British and unbalances his analysis.

He says: The empire carried within it from birth an ideological bacillus that would prove fatal ... Edmund Burke's paternalistic doctrine that colonial government was a trust. It was to be so exercised for the benefit of subject people that they would eventually attain their birthright freedom.

That is true, but it is difficult enough for an imperial power to liberate a subject people unless hanging on is more trouble than it is worth. Canada was an early example which worked well, thanks to the vision of Lord Durham. Sri Lanka was another, thanks to a series of sensitive governors. Brendon is good on both and, since his theme is the decline and fall of the empire, he describes the death throes with some relish.

And stupidities and cruelties there were aplenty — Hola, Amritsar, Perceval at Singapore, Gallipoli, the Boer war, haughty memsahibs, the shame of the 1943 Bengal famine, to name but a few. It enables Brendon to make jokes. His own made this reviewer laugh less than some of the imperialists he quotes. Raffles on the Battas: 'Not bad people, notwithstanding they eat each other'; Brougham surmised that a Canadian crisis had cost Glenelg, a lethargic Colonial Secretary, 'many a sleepless day'; the Committee on the Jameson Raid was known as `the lying-in-State at Westminster'; Lord Willingdon, GovernorGeneral of Canada and Viceroy of India in the 1920s and 30s, was known as the 'Grand Ornamental'.

Perhaps Brendon could now write a second volume. It would be welcome, since he is extremely readable and since it could concentrate on the more positive aspects of the empire. He is evidently aware of them, although he seems a little grudging about the abolition of the slave trade, and on Hong Kong he has to admit that the British were not entirely contemptible. He has a good deal of legitimate fun at the expense of Sir Alexander Grantham, an early postwar governor, but two pages later admits he tackled the housing crisis with energy. His colourful crowd scenes, his accounts of scarlet and gold, his occasional admissions that things were not always as bad as he would like (The British were far less authoritarian than Chiang Kai-shek') suggest an admirable project in embryo.

After all, as Brendon points out, India's population grew from 306 to 400 millions between 1921 and 1947 and literacy increased dramatically, while 2 5 millions volunteered for the Raj's army in the second world war, as against the 25,000 who joined Chandra Bhose. In the first world war, in spite of poor equipment and appalling military administration, the Indian army still thought it an honour to fight for the King-Emperor. The introduction of the ideas of the rule of law and representative government, even if more honoured in the breach than the observance, are enduring.

As far as we British are concerned, did we benefit? We should not underrate the benefits to us of introducing games to the colonies which enable our former subjects to humiliate us regularly, and of the universality of the English language. We would have done better, however, to be more honest with ourselves about our decline. For one thing, it would have made it easier for us to restrict immigration earlier. For another, we might have avoided some of the dangers of overstretch.

This book is in one sense a remarkable achievement. It is a good read for 650 pages. It is a pity it is unbalanced by its prejudices. No doubt it will make an acclaimed series by the BBC, a broadcasting institution that shares them.