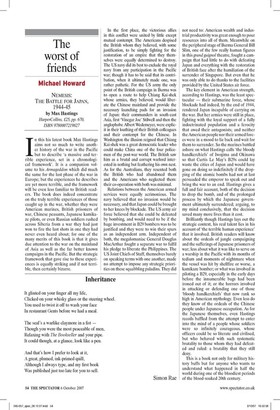 The worst of friends

Michael Howard NEMESIS: THE BATTLE FOR JAPAN, 1944-45 by Max Hastings HaiperCollins, £25, pp. 670, ISBN 9780007219827 /n this his latest book Max Hastings aims not so much to write another history of the war in the Pacific but to describe 'a massive and terrible experience, set in a chronological framework'. It is a companion volume to his Armageddon which did much the same for the last phase of the war in Europe; but the experiences he describes are yet more terrible, and the framework will be even less familiar to British readers. The book does indeed concentrate on the truly terrible experiences of those caught up in the war, whether they were American marines, British prisoners of war, Chinese peasants, Japanese kamikaze pilots, or even Russian soldiers rushed across Siberia from a war they had just won to fire the last shots in one they had never even heard about; for one of the many merits of this book is that it gives due attention to the war on the mainland of Asia as well as the far better known campaigns in the Pacific. But the strategic framework that gave rise to these experiences is equally striking and if not terrible, then certainly bizarre.

In the first place, the victorious allies in this conflict were united by little except mutual contempt. The Americans despised the British whom they believed, with some justification, to be simply fighting for the restoration of an empire that they themselves were equally determined to destroy. The US navy did its best to exclude the royal navy from any participation in the Pacific war; though it has to be said that its contribution, when it ultimately made one, was rather pathetic. For the US army the only point of the British campaign in Burma was to open a route to help Chiang Kai-shek whose armies, they believed, would liberate the Chinese mainland and provide the necessary launching pads for an invasion of Japan: their commanders in south-east Asia, first 'Vinegar Joe' Stilwell and then the anglophobe Albert Wedemeyer, were explicit in their loathing of their British colleagues and their contempt for the Chinese. In Washington the illusion reigned that Chiang Kai-shek was a great democratic leader who could make China one of the four policemen of the post-war world. The British saw him as a brutal and corrupt warlord interested in nothing but feathering his own nest. As for the Australians, they resented both the British who had abandoned them and the Americans who neglected them: their co-operation with both was minimal.

Relations between the American armed services were equally acrimonious. The navy believed that no invasion would be necessary, and that Japan could be brought to her knees by blockade. The US army air force believed that she could be defeated by bombing, and would need to be if the huge investment in B29 bombers was to be justified and they were to win their spurs as an independent arm. Independent of both, the megalomaniac General Douglas MacArthur fought a separate war to fulfil his pledge to liberate the Philippines. The US Joint Chiefs of Staff, themselves barely on speaking terms with one another, made no attempt to impose any strategic priorities on these squabbling paladins. They did not need to: American wealth and industrial productivity was great enough to pour resources into all of them. Meanwhile on the peripheral stage of Burma General Bill Slim, one of the few really human figures in this grand guignol theatre, fought a campaign that had little to do with defeating Japan and everything with the restoration of British face after the humiliation of the surrender of Singapore. But even that he was only able to do thanks to the facilities provided by the United States air force.

The key element in American strength, according to Hastings, was the least spectacular — their submarine force, whose blockade had indeed, by the end of 1944, rendered Japan incapable of carrying on the war. But her armies were still in place, fighting with the loyal support of a fully indoctrinated population and a ferocity that awed their antagonists; and neither the American people nor their armed forces were in a mood to lie back and wait for them to surrender. So the marines battled ashore on what Hastings calls 'the bloody handkerchiefs' of Iwojima and Okinawa so that Curtis Le May's B29s could lay waste the cities of Japan and would have gone on doing so indefinitely if the dropping of the atomic bombs had not at last persuaded the emperor to speak out and bring the war to an end. Hastings gives a full and fair account, both of the decision to drop the bomb, and of the prolonged process by which the Japanese government ultimately surrendered; arguing, to my mind conclusively, that the decision saved many more lives than it cost.

Brilliantly though Hastings lays out the strategic context, his real talent lies in his account of `the terrible human experience' that it involved. British readers will know about the ordeals of jungle campaigning and the sufferings of Japanese prisoners of war; less about what it was like to serve on a warship in the Pacific with its months of tedium and moments of nightmare when the vessel was hit by shellfire or worse, a kamikaze bomber; or what was involved in piloting a B29, especially in the early days before the innumerable bugs had been ironed out of it; or the horrors involved in attacking or defending one of those 'bloody handkerchiefs' that now rank so high in American mythology. Even less do they know of the ordeals of the Chinese people under Japanese occupation. As for the Japanese themselves, even Hastings recoils baffled from the attempt to enter into the mind of a people whose soldiers were so infinitely courageous, whose officers could be so literate and civilised, but who behaved with such systematic brutality to those whom they had defeated and ruled: a brutality that they still deny.

This is a book not only for military history buffs but for anyone who wants to understand what happened in half the world during one of the bloodiest periods of the blood-soaked 20th century.