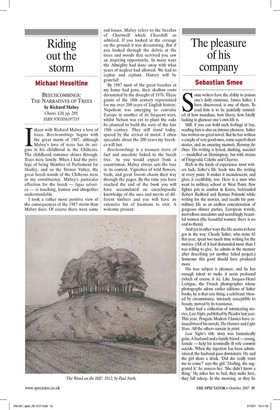 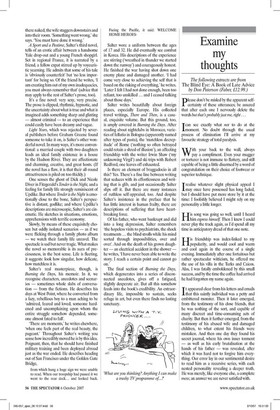 The pleasure of his company

Sebastian Smee Some writers have the ability to poison one's daily existence. James Salter, I have discovered, is one of them. To read him is to be painfully reminded of how mundane, how blurry, how fatally lacking in glamour one's own life is.

Still, if you can hold such feelings at bay, reading him is also an intense pleasure. Salter has written no great novel. But he has written a couple of very good ones, some superb short stories, and an amazing memoir, Burning the Days. His writing is lyrical, dashing, succinct — modelled on Hemingway, but with strains of Fitzgerald, Colette and Cheever.

Rich in the kinds of experience most writers lack, Salter's life feeds into the writing at every point. It makes it incandescent, and gives it credibility, too. Here is a man who went to military school at West Point, flew fighter jets in combat in Korea, befriended Robert Redford and Roman Polanski while writing for the movies, and recalls his postmilitary life as an endless concatenation of gorgeous dinner parties, European travels, marvellous anecdotes and scorchingly beautiful women (the beautiful women: there is no end to them).

And yet in other ways the life seems to have got in the way. Clearly Salter, who turns 82 this year, spent too much time writing for the movies. (All of it had demanded more than I was willing to give,' he admits in the memoir after describing yet another failed project.) Someone this good should have produced more.

His true subject is pleasure, and he has enough talent to make it seem profound (which of course it is). Like Jacques-Henri Lartigue, the French photographer whose photographs adorn earlier editions of Salter books, he is that rare thing, a celebrant: blessed by circumstance, intensely susceptible to beauty, moved by its transience.

Salter had a collection of intoxicating stories, Last Night, published by Picador last year. This year, Penguin Modern Classics have reissued two of his novels, The Hunters and Light Years. All the others remain in print.

Last Night's title story was fantastically grim. A husband and a family friend —young, female — help his terminally ill wife commit suicide. When the injection has been administered, the husband goes downstairs. He and the girl share a drink. Did she really want me to come?' says the girl. 'Darling, she suggested it,' he assures her. 'She didn't know a thing.' He takes her to bed, they make love, they fall asleep. In the morning, as they lie there naked, the wife staggers downstairs and into their room. 'Something went wrong,' she says. 'You must have done it wrong.'

It's a fine novel: very sexy, very precise. The prose is clipped, rhythmic, hypnotic, and the uncertainty about what is true and what is imagined adds something sharp and glinting — almost criminal — to an experience that could easily have been dreamy and vague.

Light Years, which was rejected by several publishers before Graham Greene found someone to take it on, is Salter's other wonderful novel. In many ways, it's more conventional: a married couple with two daughters leads an ideal family existence in a house by the Hudson River. They are affectionate and charming, creative, and great hosts. (If the novel has a flaw, it is that their all-round attractiveness is piled on too thickly.) One senses the ghost of Dick and Nicole Diver in Fitzgerald's Tender is the Night, and a feeling for family life strongly reminiscent of Updike. But where Tender is the Night is emotionally close to the bone, Salter's perspective is distant, godlike; and where Updike's descriptions are microscopic, Salter's are cinematic. He sketches in situations, emotions, apprehensions with terrific economy.

Slowly, by means of these exquisitely chosen but oddly isolated scenarios — as if we were flicking through a family photo album — we watch their family life unravel. The spectacle is sad but never tragic. What makes the novel so memorable is its aura of preciousness, in the best sense. Life is fleeting, it suggests: look how singular, how delicate, how matchless it is.

Salter's real masterpiece, though, is Burning the Days, his memoir. In it, we recognise characters, anecdotes and scenarios — sometimes whole slabs of conversation — from the fictions. He describes his days at West Point, where he converted from a lazy, rebellious boy to a man aching to be 'admired, feared and loved, someone hardened and uncomplaining upon whom the entire struggle somehow depended, someone almost fated to fall'.

'There are moments,' he writes elsewhere, 'when one feels part of the real beauty, the pageant.' Throughout Salter's writing you sense how incredibly moved he is by this idea. Poignant, then, that he should have finished military training and been deployed abroad just as the war ended. He describes heading out of San Francisco under the Golden Gate Bridge, from which hung a huge sign we were unable to read. When our troopship had passed it we went to the rear deck.., and looked back.

Salter wore a uniform between the ages of 17 and 32. He did eventually see combat in Korea. His descriptions of the experience are stirring (wreathed in thunder we started down the runway') and courageously honest. He finished the war having shot down one enemy plane and damaged another. 'I had come very close to achieving the self that is based on the risking of everything,' he writes. 'Later I felt I had not done enough, been too reliant, too unskilled ... and I ceased talking about those days.'

Is there an element of braggadocio in all this? Yes. There's a fine line between writing that seduces with its effortlessness and writing that is glib, and just occasionally Salter slips off it. But there are many instances of ruthless self-appraisal, too. And despite Salter's insistence in the preface that he has little interest in human frailty, there are descriptions of suffering that have heartbreaking force.

Of his father, who went bankrupt and slid into a long depression, Salter remembers `the hopeless visits to psychiatrists, the shock treatments ... the blind strolls while his mind sorted through impossibilities, over and over'. And on the death of his grown daughter — an electrical accident in the shower — he writes, 'I have never been able to write the story. I reach a certain point and cannot go on.'

The final section of Burning the Days, which degenerates into a series of disconnected anecdotes, gives off a fatigued, slightly desperate air. But all this somehow feeds into the book's credibility. An extraordinary life, impossible to sustain, seeks refuge in art, but even there finds no lasting sanctuary.