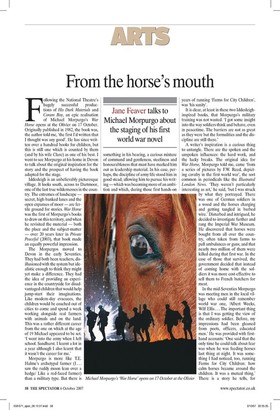 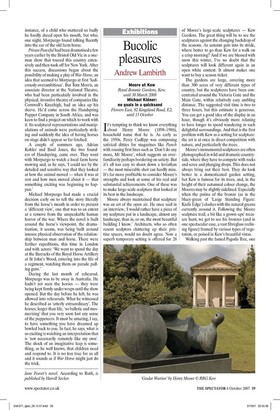 From the horse's mouth

Jane Feaver talks to Michael Morpurgo about the staging of his first world war novel Following the National Theatre's hugely successful productions of His Dark Materials and Coram Boy, an epic realisation of Michael Morpurgo's War Horse opens at the Olivier on 17 October. Originally published in 1982, the book was, the author told me, `the first I'd written that I thought was any good'. He has since written over a hundred books for children, but this is still one which is counted by them (and by his wife Clare) as one of his best. I went to see Morpurgo at his home in Devon to talk about the original inspiration for the story and the prospect of having the book adapted for the stage.

Iddesleigh is an unbelievably picturesque village. It looks south, across to Dartmoor, one of the last true wildernesses in the country. The extremes of landscape — secret, high-banked lanes and the open expanses of moor — are fertile ground for stories. War Horse was the first of Morpurgo's books to draw on this territory, and when he revisited the material — both the place and the subject-matter — over 20 years later in Private Peaceful (2003), that book made an equally powerful impression.

The Morpurgos moved to Devon in the early Seventies. They had both been teachers, disillusioned with the system but idealistic enough to think they might yet make a difference. They had the idea of providing an experience in the countryside for disadvantaged children that would help jump-start their imaginations. Like modern-day evacuees, the children would be coached out of cities to come and spend a week working alongside real farmers with animals and on the land. This was a rather different career from the one on which at the age of 19 Michael appeared to be set. 'I went into the army when I left school. Sandhurst. I learnt a lot in a year although I also learnt that it wasn't the career for me.'

Morpurgo is more like T.E. Hulme's archetypal farmer (I ... saw the ruddy moon lean over a hedge/ Like a red-faced farmer) than a military type. But there is something in his bearing, a curious mixture of command and gentleness, steeliness and honourableness that must have marked him out as leadership material. In his case, perhaps, the discipline of army life stood him in good stead, allowing him to pursue his writing — which was becoming more of an ambition and which, during those first hands-on years of running 'Farms for City Children', was 'his sanity'.

It is clear, at least in these two Iddesleighinspired books, that Morpurgo's military training was not wasted. 'I got some insight into the way soldiers think and behave, even in peacetime. The barriers are not as great as they were but the formalities and the discipline are still there.'

A writer's inspiration is a curious thing to untangle. There are the spoken and the unspoken influences: the hard work, and the lucky breaks. The original idea for War Horse, Morpurgo told me, came 'from a series of pictures by F.W. Reed, depicting cavalry in the first world war', the sort common in periodicals like the Illustrated London News. 'They weren't particularly interesting as art,' he said, 'but I was struck by what they portrayed. There was one of German soldiers in a wood and the horses charging and getting tangled in barbed wire.' Disturbed and intrigued, he decided to investigate further and rang the Imperial War Museum. He discovered that horses were bought from all over the country, often taken from farms to pull ambulances or guns; and that nearly two million of them were killed during that first war. In the case of those that survived, the government decided that instead of coming home with the soldiers it was more cost-effective to sell them to French butchers for meat.

In the mid-Seventies Morpurgo was meeting men in the local village who could still remember world war one, 'Albert Weeks, Wilf Ellis ... The important thing is that I was getting the view of the ordinary soldier. Before, my impressions had been gleaned from poets, officers, educated men.' He was provided with firsthand accounts: 'One said that the only time he could talk about fear was when he was feeding horses last thing at night. It was something I had noticed, too, running Farms for City Children: how calm horses became around the children. It was a mutual thing.' There is a story he tells, for instance, of a child who stuttered so badly he hardly dared open his mouth, but who, one night, Morpurgo found talking fluently into the ear of the old farm horse.

Private Peaceful had been dramatised a few years earlier by the Bristol Old Vic in a oneman show that toured this country extensively and then took off for New York. After this success, discussions began about the possibility of making a play of War Horse, an idea that seemed to Morpurgo at first 'ludicrously overambitious'. But Tom Morris, an associate director at the National Theatre, who had been particularly involved in the physical, inventive theatre of companies like Cornwall's Kneehigh, had an idea up his sleeve. He'd come across the Handspring Puppet Company in South Africa, and was keen to find a project on which to work with it. Its sculptural representations and manipulations of animals were particularly striking and suddenly the idea of having horses on stage didn't appear so far-fetched.

A couple of summers ago, Adrian Kohler and Basil Jones, the two founders of Handspring, came over. They went with Morpurgo to watch a local farm horse mowing and, as he says, 'I could see by the detailed and sensitive way that they looked at how the animal moved — when it was at rest and how men moved about it — that something exciting was beginning to happen.'

Michael Morpurgo had made a crucial decision early on to tell the story literally from the horse's mouth in order to present a 'different view', one that was to an extent at a remove from the unspeakable human horror of the war. Where the novel is built around the horse's viewpoint, the dramatisation, it seems, was being built around intense physical observation of the relationship between man and horse. There were further expeditions, this time in London and with actors: 'We went to spend the day at the Barracks of the Royal Horse Artillery at St John's Wood, entering into the life of a regiment, watching them on parade pulling guns.'

During the last month of rehearsal, Morpurgo was to be away in Australia. He hadn't yet seen the horses — they were being kept firmly under wraps until the show opened. But the day before he left, he was allowed into rehearsals. What he witnessed he described as 'utterly extraordinary'. The horses, larger than life, 'so balletic and mesmerising' that you very soon lost any sense of the puppeteers. It must be amazing, I say, to have something you have dreamed up bowled back to you. In fact, he says, what is so exciting is watching an interpretation that is 'not necessarily remotely like my own'. The shock of an imaginative leap is something, as he well knows, that children need and respond to. It is no less true for us all and it sounds as if War Horse might just do the trick.

Jane Feaver's novel, According to Ruth, is published by Hamill Secker.