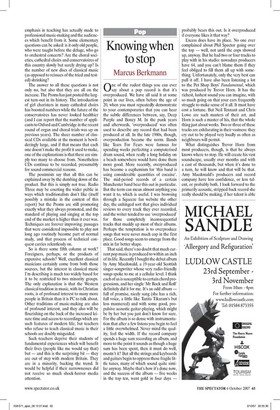 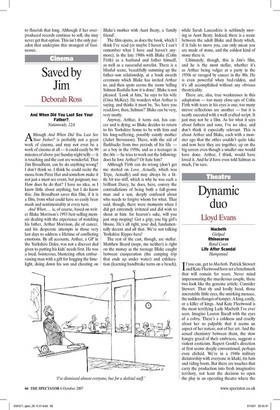 Knowing when to stop

Marcus Berkmann One of the rudest things you can ever say about a pop record is that it's overproduced. We have all said it at some point in our lives, often before the age of 20, when you must repeatedly demonstrate to your contemporaries that you can hear the subtle differences between, say, Deep Purple and Boney M. In the punk years and afterwards, 'overproduced' was often used to describe any record that had been produced at all. In the late 1980s, though, overproduction became the norm. Bands like Tears For Fears were famous for spending weeks perfecting a computerised drum sound, when really a long holiday on a beach somewhere would have done them more good. More recently, overproduced has become a euphemism for 'this band is using considerable quantities of cocaine'. The mid-period records of a certain Manchester band bear this out in particular. But the term can mean almost anything you want it to, which is useful. I was browsing through a Squeeze fan website the other day, the unhinged sort that gives individual reviews to every track they ever recorded, and the writer tended to use 'overproduced' for those completely inconsequential tracks that muddy up most of their albums. Perhaps the temptation is to overproduce songs that were never much cop in the first place. Good songs seem to emerge from the mix in far better shape.

That said, there's no doubt that much current pop music is produced to within an inch of its life. Recently I bought the debut album by Amy Macdonald, a 19-year-old Scottish singer-songwriter whose very radio-friendly songs spoke to me at a cellular level. I think each of us is susceptible to certain chord progressions, and her single 'Mr Rock and Roll' definitely did it for me. It's an odd album — full of promise, nicely sung (she has a rich, full voice, a little like Tanita Tikaram's but less mannered) and with some good, propulsive acoustic guitar-playing, which might be by her but you just don't know for sure. For the album is so dense with instrumentation that after a few listens you begin to feel a little overwhelmed. Never mind the quality, feel the width. If the record company spends a huge sum recording an album, and more to the point it sounds as though a huge sum has been spent, then it must do well, mustn't it? But all the strings and keyboards and guitars begin to oppress these fragile little tunes, many of which sound quite similar anyway. Maybe that's how it's done now, and the success of the album — five weeks in the top ten, went gold in four days — probably bears this out. Is it overproduced if everyone likes it that way?

Excess does have its place. No one ever complained about Phil Spector going over the top — well, not until the cops showed up, anyway. But he had two or four tracks to play with in his studio: nowadays producers have 64, and you can't blame them if they feel obliged to fill them all up with something. Unfortunately, only the very best can pull it off. I have also been listening a lot to the Pet Shop Boys' Fundamental, which was produced by Trevor Horn. It has the richest, lushest sound you can imagine, with so much going on that your ears frequently struggle to make sense of it all. It must have cost a fortune. But Neil Tennant and Chris Lowe are such masters of their art, and Horn is such a master of his, that the whole thing just about works. Two or three of these tracks are exhilarating in their vastness: they cry out to be played very loudly as often as neighbours will permit.

What distinguishes Trevor Horn from most producers, though, is that he always knows where to stop. He will create his vast soundscape, usually over months and with a cast of thousands, but when it's done to a turn, he will know and that will be that. Amy Macdonald's producers and record company have less confidence, or less talent, or probably both. I look forward to the primarily acoustic, stripped-back record she really should be making, if her talent is able to flourish that long. Although if her overproduced records continue to sell, she may never get that option. This isn't the only paradox that underpins this strangest of businesses.