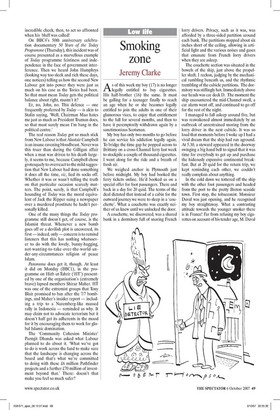 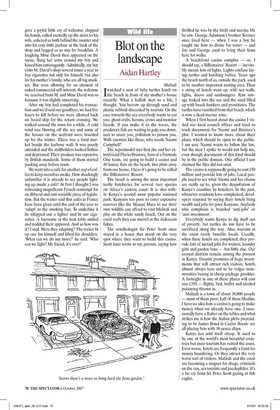 Jeremy Clarke s of this week my boy (17) is no longer legally entitled to buy cigarettes. His half-brother (16) the same. It must be galling for a teenager finally to reach an age when he or she becomes legally entitled to join the adults in one of their glamorous vices, to enjoy that entitlement to the full for several months, and then to have it peremptorily withdrawn again by a sanctimonious Scotsman.

My boy has only two months to go before he can service his addiction legally again. To bridge the time gap he popped across to Brittany on a cross-Channel ferry last week to stockpile a couple of thousand cigarettes. I went along for the ride and a breath of fresh air.

We weighed anchor in Plymouth just before midnight. My boy had booked the ferry tickets online. He'd booked us on a special offer for foot passengers. There and back in a day for 20 quid. The terms of the deal dictated that instead of a cabin for the outward journey we were to sleep in a 'couchette'. What a couchette was exactly neither of us knew until we unlocked the door.

A couchette, we discovered, was a shared bunk in a dormitory full of snoring French lorry drivers. Privacy, such as it was, was afforded by a three-sided partition around each bunk. The partitions stopped about six inches short of the ceiling, allowing in artificial light and the various noises and gases that emanate from French lorry drivers when they are asleep.

The couchette section was situated in the bowels of the ship, just above the propeller shaft, I reckon, judging by the mechanical rumbling beneath us, and the rhythmic trembling of the cubicle partitions. The dormitory was stiflingly hot. Immediately above our heads was car deck D. The moment the ship encountered the mid-Channel swell, a car alarm went off, and continued to go off for the rest of the night.

I managed to fall asleep around five, but was reawakened almost immediately by an outbreak of unrestrained snoring from the lorry driver in the next cubicle. It was so loud that moments before I woke up I had a vivid dream that the ship had run aground. At 5.30, a steward appeared in the doorway swinging a big hand bell to signal that it was time for everybody to get up and purchase the hideously expensive continental breakfast. But at 20 quid for the return trip, we kept reminding each other, we couldn't really complain about anything.

In the cold dawn we tottered off the ship with the other foot passengers and headed from the port to the pretty Breton seaside town. First stop, the tobacconist. Monsieur Duval was just opening, and he recognised my boy straightaway. What a contrasting attitude towards the younger smoker there is in France! Far from refusing my boy cigarettes on account of his tender age, M. Duval gave a joyful little cry of welcome, clapped his hands, called excitedly up the stairs to his wife, ushered us both behind the counter and into his cosy little parlour at the back of the shop and begged us to stay for breakfast. A laughing Mme Duval then appeared on the scene, flung her arms around my boy and kissed him extravagantly. Admittedly, my boy visits M. Duval's shop several times a year to buy cigarettes not only for himself but also for his mother's family, who are all big smokers. But even allowing for an element of naked commercial self-interest, the welcome we received from M. and Mme Duval was so humane it was slightly unnerving.

After my boy had completed his transaction and we'd said our goodbyes, we had five hours to kill before we were allowed back on board ship for the return crossing. We walked around the town for a while. A cold wind was blowing off the sea and some of the houses on the seafront were boarded up for the winter. There was a food market beside the harbour wall. It was poorly attended and the stallholders looked listless and depressed. Their produce was expensive by British standards. Some of them started packing away before noon.

We went into a café for another cup of coffee to keep ourselves awake. How shockingly unfamiliar it is already to see people lighting up inside a café! At first I thought I was witnessing magnificent French contempt for an illiberal and anti-sociable piece of legislation. But the waiter said that cafés in France have been given until the end of the year to 'adapt' to the smoking ban. To underline it he whipped out a lighter and lit our cigarettes. A foursome at the next table smiled and nodded their approval. And so how was it? I said. Were they adapting? The waiter lit up one for himself and lifted his shoulders. 'What can we do any more?' he said. 'Who can we fight? My friend, it's over!'