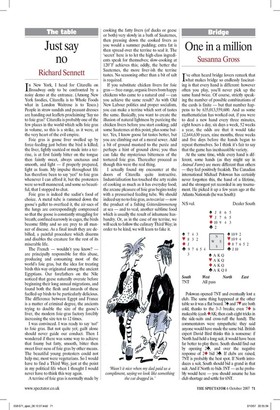 Richard Sennett In New York, I head for Citarella on Broadway only to be confronted by a noisy demo at the entrance. (Among New York foodies, Citarella is to Whole Foods what in London Waitrose is to Tesco.) People in straw sandals and peasant dresses are handing out leaflets proclaiming 'Say no to foie gras!' Citarella is probably one of the few places in the world which sells foie gras in volume, so this is a strike, as it were, at the very heart of the evil empire.

Foie gras is goose liver swelled up by force-feeding just before the bird is killed; the liver, lightly sautéed or made into a terrine, is at first faintly bitter on the tongue then faintly sweet, always unctuous and smooth, and light — if properly prepared, light as foam. My impulse throughout life has therefore been to say 'yes!' to foie gras whenever I can afford it, but the protesters were so well mannered, and some so beautiful, that I stopped to chat.

Foie gras is indeed the sadist's food of choice. A metal tube is rammed down the goose's gullet to overfeed it, the air-sacs of the lungs are correspondingly compressed so that the goose is constantly struggling for breath; confined narrowly in cages, the birds become filthy and so are prey to all manner of disease. As a final insult they are debilled, a painful procedure which disarms and disables the creature for the rest of its miserable life.

The French — wouldn't you know? — are principally responsible for this abuse, producing and consuming most of the world's foie gras, but the idea for treating birds this way originated among the ancient Egyptians. Our forefathers on the Nile noticed that geese naturally overate before beginning their long annual migrations, and found both the flesh and innards of these fuelled-up birds to be particularly delicious. The difference between Egypt and France is a matter of criminal degree, the ancients trying to double the size of the goose's liver, the modern foie-gras factory forcibly increasing the size ten to 12 times.

I was convinced. I was ready to say 'no!' to foie gras. But not quite yet; guilt alone should never guide our conduct. Then I wondered if there was some way to achieve that foamy but fatty, smooth, bitter then sweet liver-ness of foie gras by other means. The beautiful young protesters could not help me; most were vegetarians. So I would have to find a Third Way, just at the point in my political life when I thought I would never have to think this way again.

A terrine of foie gras is normally made by cooking the fatty livers (of ducks or geese or both) very slowly in a bath of Sauternes, then pressing down the cooked livers as you would a summer pudding; extra fat is then spread over the terrine to seal it. The 'secret' here is to let the high-class ingredients speak for themselves; slow-cooking at 120°F achieves this; oddly, the better the Sauternes, the more liver-ish the terrine tastes. No seasoning other than a bit of salt is required.

If you substitute chicken livers for foie gras — free-range, organic livers from happy chickens who came to a natural end — can you achieve the same result? As with Old New Labour politics and proper socialism, you can make a terrine which sort of tastes the same. Basically, you want to create the illusion of natural lightness by pureeing the chicken livers before you start cooking; add some Sauternes at this point, plus some butter. Yes, I know goose fat tastes better, but you are climbing out of a moral sewer. Add a bit of ground mustard to the purée and perhaps a hint of ground clove; you thus can fake the mysterious bitterness of the tortured foie gras. Thereafter proceed as though this were the real thing.

I actually found my encounter at the doors of Citarella quite instructive. Industrialisation has touched the arty realm of cooking as much as it has everyday food; the arcane pleasure of foie gras begins today with a pressurised feeding tube. We should indeed say no to foie gras, as to caviar — now the product of a fishing Gotterclammentng at sea — and to veal, another sublime food which is usually the result of inhumane husbandry. Or, as in the case of my terrine, we will seek to follow the culinary Third Way; in order to be kind, we will learn to fake it.