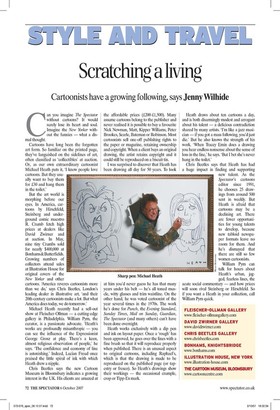 Cartoonists have a growing following, says Jenny Wilhide Can you imagine The Spectator without cartoons? It would surely lose its heart and soul. Imagine the New Yorker without the funnies — what a dismal thought.

Cartoons have long been the forgotten art form. So familiar on the printed page, they've languished on the sidelines of art, often classified as 'collectibles' at auction. Or, as our own extraordinary cartoonist Michael Heath puts it, 'I know people love cartoons. But they usually want to buy them for £30 and hang them in the toilet.'

But the art world is morphing before our eyes. In America, cartoons by Hirschfeld, Steinberg and underground comic maestro R. Crumb fetch high prices at dealers like David Zwirner and at auction. In May, nine tiny Crumbs sold for nearly $400,000 at Bonhams &Butterfields. Growing numbers of collectors attend sales at Illustration House for original covers of the New Yorker and other cartoons. America reveres cartoonists more than we do,' says Chris Beetles, London's leading dealer in illustrative art, 'and their 20th-century cartoonists make a lot. But what America does today, we do tomorrow.'

Michael Heath recently had a sell-out show at Fleischer-011man — a cutting-edge gallery in Philadelphia. William Pym, the curator, is a passionate advocate. 'Heath's works are profoundly misanthropic — you can see the influence of the Expressionist George Grosz at play. There's a keen, almost religious observation of people,' he says. 'The confidence and economy of line is astonishing.' Indeed, Lucian Freud once praised the little spiral of ink with which Heath drew a nipple.

Chris Beetles says the new Cartoon Museum in Bloomsbury indicates a growing interest in the UK. His clients are amazed at the affordable prices (£200-£1,500). Many assume cartoons belong to the publisher and never realised it is possible to buy a favourite Nick Newman, Matt, Kipper Williams, Peter Brookes, Searle, Bateman or Robinson. Most cartoonists sell one-off publishing rights to the paper or magazine, retaining ownership and copyright. When a client buys an original drawing, the artist retains copyright and it could still be reproduced on a biscuit tin.

I was surprised to discover that Heath has been drawing all day for 50 years. To look Sharp pen: Michael Heath at him you'd never guess he has that many years under his belt — he's all toned muscle, witty glasses and trim waistline. On the other hand, he was voted cartoonist of the year several times in the 1970s. The work he's done for Punch, the Evening Standard, Sunday Times, Mail on Sunday, Guardian, The Spectator (and many others) can't have been done overnight.

Heath works exclusively with a dip pen and ink on layout paper. Once a 'rough' has been approved, he goes over the lines with a fine brush so that it will reproduce properly when published. There is an unusual aspect to original cartoons, including Raphael's, which is that the drawing is made to be reproduced on the published page (or tapestry or fresco). So Heath's drawings show their workings — the occasional crumple, crop or Tipp-Ex mark.

Heath draws about ten cartoons a day, and is both disarmingly modest and arrogant about his talent — a delicious contradiction shared by many artists. `I'm like a jazz musician — if you got a mass following, you'd just die.' But he also knows the strength of his work. 'When Tracey Emin does a drawing you hear endless nonsense about the sense of loss in the line,' he says. 'But I bet she's never hung in the toilet.'

Chris Beetles says that Heath has had a huge impact in finding and supporting new talent. As the Spectator's cartoons editor since 1991, he chooses 25 drawings from around 500 sent in weekly. But Heath is afraid that cartoons may be a declining art. There are fewer opportunities for young talents to develop, because new tabloid newspaper formats leave no room for them. And he's dismayed that there are still so few women cartoonists.

William Pym can talk for hours about Heath's urban, jagged, fearless lines, the acute social commentary — and how prices will soon rival Steinberg or Hirschfeld. So if you want a Heath in your collection, call William Pym quick.