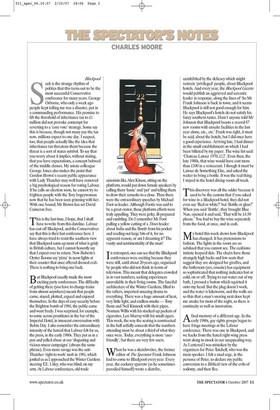 CHARLES MOORE Blackpool Such is the strange rhythm of politics that this turns out to be the most successful Conservative conference for many years. George Osborne, who only a week ago people kept telling me was a disaster, put in a commanding performance. His promise to lift the threshold of inheritance tax to £1 million did not provoke contempt for reverting to a 'core vote' strategy. Some say this is because, though not many pay the tax now, millions expect to one day. I suspect, too, that people actually like the idea that inheritance tax threatens them because the threat is a sort of status symbol. To say that you worry about it implies, without stating, that you have expectations, a concept beloved of the middle classes. My astute colleague George Jones also makes the point that Gordon Brown's recent public appearance with Lady Thatcher may well have removed a big psychological reason for voting Labour. If he calls an election soon, he cannot try to frighten people with the Tory bogeywoman now that he has been seen grinning with her. With one bound, Mr Brown has set David Cameron free.

This is the last time, I hope, that I shall have to write from this dateline. Labour has cast off Blackpool, and the Conservatives say that this is their last conference here. I have always tried to resist the southern view that Blackpool sums up most of what is grisly in British culture, but I cannot honestly say that I expect ever to return. Now Roberts's Oyster Rooms say 'pizza' in neon lights at their counter that once offered dressed crab. There is nothing to bring one back.

But Blackpool usually made the most exciting party conferences. The difficulty of getting there (you have to change trains from almost anywhere) meant that people came, stayed, plotted, argued and enjoyed themselves. In the days of easy security before the Brighton bomb of 1984, the public came and went freely. I was surprised, for example, to come across prostitutes in the bar of the Imperial Hotel, in innocent conversation with Robin Day. I also remember the extraordinary intensity of the hatred that Labour felt for us, the press, in the early 1980s. They put us in a pen and yelled abuse at our 'disgusting and vicious smear campaigns' (always the same phrase). Even more savage was the antiThatcher 'right to work' mob in 1981, which jostled us as I approached the Winter Gardens steering T.E. Utley, who was blind, on my arm. At Labour conferences, old trade unionists like Alex Kitson, sitting on the platform, would put down female speakers by calling them 'lassie' and 'pet' and telling them to draw their remarks to a close. Then there were the extraordinary speeches by Michael Foot as leader. Although Footie was said to be a great orator, these platform efforts were truly appalling. They were jerky, ill-prepared and rambling. Do I remember Mr Foot pulling a yellow cutting of a Times leader about India and the Bomb from his pocket and reading out large bits of it, for no apparent reason, or am I dreaming it? The vanity and sentimentality of the man!

In retrospect, one can see that the Blackpool conferences were exciting because they were still, until about 20 years ago, organised by people who did not think in terms of television. This meant that delegates crowded in in vast numbers, seeking experiences unavailable in their living rooms. The fanciful architecture of the Winter Gardens, filled to the rafters, imported amazing drama to everything. There was a huge amount of heat, very little light, and endless smoke — Tony Benn and Neil Kinnock with their pipes, Norman Willis with his stacked-up packets of cigarettes, Len Murray with his small cigars. This week, the way the seating is constructed in the hall artfully conceals that the numbers attending must be about a third of what they once were. Today, everything is more 'userfriendly', but there are very few users.

When he was a sketchwriter, the former editor of The Spectator Frank Johnson had to come to Blackpool every year. Every year, the cockney sparrow (as he sometimes parodied himself) wrote a diatribe, uninhibited by the delicacy which might restrain 'privileged' people, about Blackpool hotels. And every year, the _Blackpool Gazette would publish an aggrieved and sarcastic leader in response, along the lines of 'So Mr Frank Johnson is back in town, and it seems Blackpool is still not good enough for him He says Blackpool's hotels do not satisfy his fancy southern tastes. Hasn't anyone told Mr Johnson that Blackpool boasts a record 87 new rooms with ensuite facilities in the last year alone, etc., etc.' Frank was right, it must be said, about the hotels, but I did once have a good experience. Arriving late, I had dinner in the small establishment on which I had been billeted by my paper. The wine list said: 'Chateau Latour 1970, £12'. Even then, the late 1980s, that wine would have cost more than £100 in a restaurant. I though it must be Latour de Something Else, and asked the waiter to bring a bottle. It was the real thing. I stayed in the hotel dining-room all week.

This discovery was all the odder because it used to be the custom that if you asked for wine in a Blackpool hotel, they did not even say 'Red or white?' but 'Bottle or glass?' When you said 'Bottle', they brought Blue Nun, opened it and said, 'That will be £4.50 please.' You had to buy the wine separately from the food, at once, and in cash.

My hotel this week shows how Blackpool has changed. It has pretensions to fashion. The lights in the room are so subdued that you cannot see. The cushions imitate leopard skin. The chairs have those strangely high backs and low seats that suggest they are designed for giraffes, and the bathroom (yes, ensuite) has equipment so sophisticated that nothing indicates hot or cold, on or off. Trying to run water out of my bath, I pressed a button which squirted it onto my head. But the plug doesn't work, and the water is lukewarm, and the walls are so thin that a man's snoring next door kept me awake for most of the night, so there is continuity as well as innovation.

Afinal memory of a different age. In the early 1980s, gay rights groups began to have fringe meetings at the Labour conference. There was one in Blackpool, and we hacks from the hated right-wing press went along to mock in our unappealing way. As I entered I was mistaken by the organisers for Peter Tatchell, who was the main speaker. I felt a mad urge, in the persona of Peter, to declare my public conversion to a Biblical view of the evils of sodomy, and then flee.