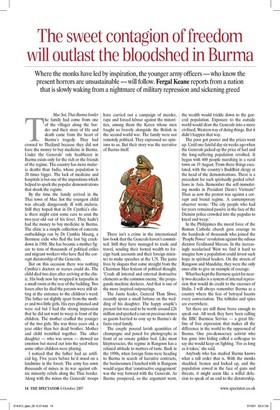 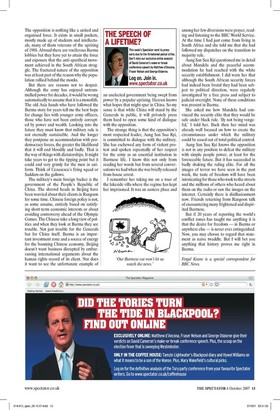 Page 8, 6 October 2007 — The sweet contagion of freedom will outlast the bloodshed in Burma
Close

The sweet contagion of freedom will outlast the bloodshed in Burma

Where the monks have led by inspiration, the younger army officers — who know the present horrors are unsustainable — will follow. Fergal Keane reports from a nation that is slowly waking from a nightmare of military repression and sickening greed Mae Sot, Thai-Burma border The family had come from one of the villages along the border and their story of life and death came from the heart of Burma's tragedy. They had crossed to Thailand because they did not have the money to buy medicine in Burma. Under the Generals' rule healthcare in Burma exists only for the rich or the friends of the regime. The country has more malaria deaths than India, whose population is 20 times bigger. The lack of medicine and hospitals is but one of the impositions which helped to spark the popular demonstrations that shook the regime.

By the time the family arrived in the Thai town of Mae Sot the youngest child was already dangerously ill with malaria. Still they hoped that in Dr Cynthia's clinic there might exist some cure to coax the two-year-old out of his fever. They hadn't had the money to buy medicine in Burma. The clinic is a simple collection of concrete outbuildings run by Dr Cynthia Maung, a Burmese exile who fled the last big crackdown in 1988. She has become a mother figure to tens of thousands of political exiles and migrant workers who have fled the corrupt dictatorship of the Generals.

But on this occasion there was nothing Cynthia's doctors or nurses could do. The child died two days after arriving at the clinic. His body now lay wrapped in tarpaulin in a small room at the rear of the building. Two hours after he died the parents were still sitting at the entrance to the children's ward. The father sat slightly apart from the mother and two little girls. His eyes glistened and were red but I had the strong impression that he did not want to weep in front of the children. The mother cradled the younger of the two girls. She was three years old, a year older than her dead brother. Mother and child trembled together. The other daughter — who was seven — showed no emotion but stared out into the yard where some other children were playing.

I noticed that the father had an artificial leg. Five years before he'd stood on a landmine in the forest. The army has sown thousands of mines in its war against ethnic minority rebels along the Thai border. Along with the mines the Generals' troops have carried out a campaign of murder, rape and forced labour against the minorities, among them the Karen whose men fought so bravely alongside the British in the second world war. The family were not remotely political. They expressed no opinions to us. But their story was the narrative of Burma itself.

There isn't a crime in the international law-book that the Generals haven't committed. Still they have managed to trade and travel, sending their looted wealth to foreign bank accounts and their foreign minister to make speeches at the UN. The junta lives by slogans that come straight from the Chairman Mao lexicon of political thought. 'Crush all internal and external destructive elements as the common enemy,' the propaganda machine declares. And that is one of the more inspired outpourings.

The Junta leader, General Than Shwe, recently spent a small fortune on the wedding of his daughter. The happy couple's present list was said to be worth around £26 million and sparked a run on precious stones as guests hurried to cosy up to Burma's de facto royal family.

The couple poured lavish quantities of champagne and posed for photographs in front of an ornate golden bed. Like most kleptocracies, the regime in Rangoon has a relaxed attitude to matters of taste. Back in the 1990s, when foreign firms were heading to Burma in search of lucrative contracts, the businessmen I lunched with in Rangoon would argue that 'constructive engagement' was the way forward with the Generals. As Burma prospered, so the argument went, the wealth would trickle down to the general population. Exposure to the outside world would draw the Generals into a more civilised, Western way of doing things. But it didn't happen that way.

The poor got poorer and the prices went up. Until one fateful day six weeks ago when the Generals jacked up the price of fuel and the long-suffering population revolted. It began with 400 people marching in a rural town on 19 August. From there things escalated, with the country's Buddhist clergy at the head of the demonstrations. There is a precedent for such spiritually guided rebellions in Asia. Remember the self-immolating monks in President Diem's Vietnam? Then as now the protest was against a corrupt and brutal regime. A contemporary observer wrote: 'The city people who had for years remained passive in the face of the Diemist police crowded into the pagodas to kneel and weep.'

In the Philippines the moral force of the Roman Catholic church gave courage to the hundreds of thousands who joined the 'People Power' revolution against the odious dictator Ferdinand Marcos. In the increasingly secularised West we find it hard to imagine how a population could invest such hope in spiritual leaders. On the streets of Rangoon and Mandalay, they were the only ones able to give an example of courage.

What has kept the Burmese quiet for nearly two decades is a system of internal repression that would do credit to the excesses of Stalin. I will always remember Burma as a country where the fear of betrayal haunts every conversation. The telltales and spies are everywhere.

Yet there are still those brave enough to speak out. All week they have been calling the BBC Burmese Service — a great lifeline of free expression that makes all the difference in the world to the oppressed of Burma. One pro-democracy activist who has gone into hiding called a colleague to say she would keep on fighting. Tor as long as it takes,' she said.

Anybody who has studied Burma knows what a tall order that is. With the monks shackled, beaten and locked up, and the population cowed in the face of guns and threats, it might seem like a wilful delusion to speak of an end to the dictatorship.

The opposition is nothing like a united and organised force. It exists in small pockets, mostly made up of students and intellectuals, many of them veterans of the uprising of 1988. Abroad there are vociferous Burma lobbies but they have yet to attain the force and exposure that the anti-apartheid movement achieved in the South African struggle. The fractured nature of the opposition was at least part of the reason why the population rallied behind the monks.

But there are reasons not to despair. Although the army has enjoyed untrammelled power for decades, it would be wrong automatically to assume that it is a monolith. The old Asia hands who have followed the Burma story for years tell me the best hope for change lies with younger army officers, those who have not been entirely corrupted by power and wealth. Looking into the future they must know that military rule is not eternally sustainable. And the longer they postpone an accommodation with prodemocracy forces, the greater the likelihood that it will end bloodily and badly. That is the way of things with dictatorships. It might take years to get to the tipping point but it could end very grimly for the men in uniform Think of Ceausescu's firing squad or Saddam on the gallows.

The military's main foreign backer is the government of the People's Republic of China. The shrewd heads in Beijing have been worried about their clients in Rangoon for some time. Chinese foreign policy is not, as some assume, entirely based on satisfying short-term economic interests or about avoiding controversy ahead of the Olympic Games. The Chinese take a long view of politics and when they look at Burma they see trouble. Not just trouble for the Generals but for China itself. Burma is an important investment zone and a source of energy for the booming Chinese economy. Beijing doesn't want business disrupted by embarrassing international arguments about the human rights record of its client. Nor does it want to see the unfortunate example of an unelected government being swept from power by a popular uprising. Heaven knows what hopes that might spur in China. So my sense is that while China will stand by the Generals in public, it will privately press them hard to open some kind of dialogue with the opposition.

The strange thing is that the opposition's most respected leader, Aung San Suu Kyi, is committed to dialogue with the military. She has eschewed any form of violent protest and spoken repeatedly of her respect for the army as an essential institution in Burmese life. I know this not only from reading her words but from several conversations we had when she was briefly released from house arrest.

I remember her taking me on a tour of the lakeside villa where the regime has kept her imprisoned. It was an austere place and among her few diversions were prayer, reading and listening to the BBC World Service. At the time I had just come from living in South Africa and she told me that she had followed my dispatches on the transition to majority rule.

Aung San Suu Kyi questioned me in detail about Mandela and the peaceful accommodation he had reached with the white security establishment. I did warn her that although the South African security forces had indeed been brutal they had been subject to political direction, were regularly investigated by a free press and subject to judicial oversight. None of these conditions was present in Burma.

She asked me how Mandela had convinced the security elite that they would be safe under black rule. 'By not being vengeful,' I told her. Back then her mind was already well focused on how to create the circumstances under which the military could be eased out of total political control.

Aung San Suu Kyi knows the opposition is not in any position to defeat the military with simple people power, at least for the foreseeable future. But it has succeeded in badly shaking the ruling elite. For all the images of terror we have seen in the past week, the taste of freedom will have been intoxicating for those who took to the streets and the millions of others who heard about them on the radio or saw the images on the internet. Certainly there is disillusionment now. Friends returning from Rangoon talk of encountering many frightened and dispirited Burmese.

But if 20 years of reporting the world's conflict zones has taught me anything it is that the desire for freedom — in Burma or anywhere else — is never ever extinguished. Now, you may choose to regard that statement as naive twaddle. But I will bet you anything that history proves me right in Burma.

Fergal Keane is a special correspondent for BBC News.