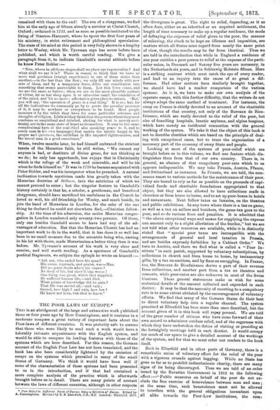 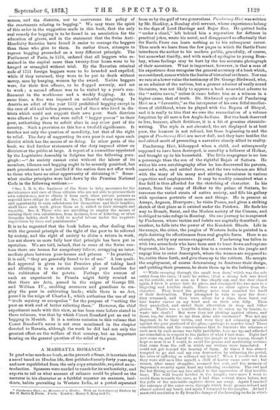 THE POOR LAWS OF EUROPE.*

THIS is an abridgment of the large and exhaustive work Published three or four years ago by Herr Emminghaus, and it contains in a moderate compass a great variety of important facts about the Poor-laws of different countries. It was probably safe to Resume that those who were likely to read such a work would have a tolerably intimate acquaintance with the English system, and would be able to compare its leading features with those of the systems which are here described. For this reason, the German account of the English Poor Law has not been translated, and the book has also been considerably lightened by the omission of essays on the systems which prevailed in many of the small States of Germany. We think it would have been well if some of the characteristics of these systems had been presented to us in the introduction, and if that had contained a more complete analysis of the practice which is afterwards brought before us in detail. There are many points of contact between the laws of different countries, although in other respects • Poor Relief in Different Parts of Europe, being a Selection of Essays. Edited by A. Emmbeglatue. Revised by E. B. Eastwick, 0.13, 31.1'. London : Stanford. 1873.

the divergence is great. The right to relief, depending, as it so often does, either on an inherited or an acquired settlement, the length of time necessary to make up a regular residence, the mode of defraying the expenses of relief given to the poor, the manner of relieving, the check to be kept on idleness and imposition, are matters which all States must regard from nearly the same point of view, though the results may be far from identical. Thus we are told in the introduction that while in England a residence of one year entitles a poor person to relief at the expense of the parti- cular union, in Denmark and Saxony five years are necessary, in the Netherlands six years, and in Schleswig Holstein fifteen. Here is a striking contrast which must catch the eye of every reader, and lead to an inquiry into the cause of so great a dif- ference. Had other matters been similarly brought together, we should have had a readier comparison of the various systems. As it is, we have to make our own analysis of the separate essays, with this further difficulty, that the writers do not always adopt the same method of treatment. For instance, the essay on France is chiefly devoted to an account of the charitable institutions of that country, not only of the Bureaux de Bien- faisance, which are really devoted to the relief of the poor, but also of foundling hospitals, lunatic asylums, and alpine hospices, which have merely an incidental connection with the general working of the system. We take it that the object of this book is not to describe charities which are based on the principle of deal- ing with exceptional cases, but to trace the organisation of a necessary part of the economy of every State and people.

Looking at most of the systems of poor-relief which are brought before us in this volume, we find one feature which dis- tinguishes them from that of our own country. There is, in general, an absence of that compulsory poor-rate which to us appears indispensable. We may take Prussia, Austria, Fiance, and Switzerland as instances. In Prussia, we are told, the com- munes resort to various methods for the maintenance of their poor. They are bound to rely as far as possible on the proceeds of capi- talised funds and charitable foundations appropriated to that object, but they are also allowed to have collections made in churches or from house to house, and to set up poor-boxes in hotels and restaurants. Next follow taxes on luxuries, on the theatres and public exhibitions. In any town where there is a tax on game, as well as a tax on millers and butchers, the game-tax goes to the poor, and so do various fines and penalties. It is admitted that " the above exceptional ways and means for supplying the expense can amount only to a slight alleviation of the burden," but we are not told what other resources are available, while it is distinctly stated that " special poor taxes are incompatible with the arrangements of general and local taxation in Prussia, and are besides expressly forbidden by a Cabinet Order." We turn to Austria, and there we find what is called a " Poor In- stitute " in each parish, supported by voluntary subscriptions, by collections in church and from house to house, by testamentary gifts, by a tax on auctions, and by fines on smuggling. In France, too, the Bureaux de Bienfaisance derive a part of their revenue from collections, and another part from a tax on theatres and concerts, while poor-rates are also unknown in most of the Swiss Cantons. 'I hese general statements make us wish for some statistical details of the amount collected and expended in each district. It may be that the necessity of resorting to a compulsory rate is to some extent obviated by the encouragement of voluntary efforts. We find that many of the German States do their best to direct voluntary help into a regular channel. The system practised at Elberfeld has been more than once described, but the account given of it in this book will repay perusal. We are told of the great number of citizens who have come forward of their own accord to administer outdoor relief, and of the eagerness with which they have undertaken the duties of visiting or presiding at the fortnightly meetings held in each district. It would occupy too much of our space to give a detailed account of the workings of the system, and for that we must refer our readers to the book itself.

Both in Elberfeld and in other parts of Germany, there is a remarkable union of voluntary effort for the relief of the poor with a vigorous crusade against begging. While no State has gone so far as to prohibit indiscriminate charity, there are many signs of its being discouraged. Thus we are told of an order issued by the Bavarian Government in 1816 to the following effect :—" Public measures on behalf of the poor do not ex- clude the free exercise of benevolence between man and man ; at the same time, such benevolence must not be allowed to interfere with the general obligations incumbent upon all alike towards the Poor-Law institutions, the ccom,

munes, arid the districts, nor to contravene the policy of the enactments relating to begging." We may trace the spirit of this order in the suggestion made in this book, that the only real remedy for begging is to be found in an association for the education of givers, and in the statement that the Swiss Anti- Mendicity Societies have found it easier to manage the beggars than those who give to them. In earlier times, attempts to repress begging proceeded on a very different principle. The Parliament of Paris, in 1576, ordered that all beggars who re- mained in the capital more than twenty-four hours were to he hanged or strangled without trial. By the Bavarian criminal code of 1751 foreign beggars were to be branded and expelled, while if they returned, they were to be put to death without mercy, men by hanging, women by the sword. Native beggars were, for their first offence, to be flogged severely, and set to work ; a second offence was to be visited by a year's con- finement in the workhouse and a weekly flogging. At the same time, a fine was imposed on unlawful almsgiving. In Austria an edict of the year 1552 prohibited begging except in the case of old and infirm persons, and of those who lived in dis- tricts which could not support their own poor. Such districts were allowed to give what were called " beggar passes" to their poor, authorising them to solicit alms in any other part of the country. Such a provision as this has a twofold significance. It touches not only the question of mendicity, but that of the right to relief. The duty of supporting its own poor is cast upon each district which has the means of so doing. In other parts of the book, we find further statements of the duty imposed either on districts or the public at large. A report of a committee appointed by the Legislative Assembly in Belgium has the following para- graph :—‘, As society cannot exist without the labour of its members, idleness and begging ought to be severely punished, but such punishment is not justified if the nation does not offer work to those who have no other opportunity of obtaining it." Some • what similar principles were laid down by the Prussian National Code in the following sections :—

"Sec. 1. It is the business of the State to take measures for the maintenance and care of those citizens who are not able to procure their own subsistence, nor to obtain it from such other private persons as especial laws oblige to afford it. Sec. 2. Those who only want means and opportunity to earn subsistence for themselves and their families, shall have such work given them as is suited to their strength and capacity. Sec. 3. Those who are unwilling to employ the means of earning their own subsistence, from laziness, love of loitering, or other irregular habits, shall be held to useful labour under the requisite supervision by force and punishments."

It is to be regretted that the book before us, after dealing thus with the general principle of the right of the poor to be relieved by society, and the right of society to claim a return in work, has not shown us more fully how that principle has been put in operation. We are told, indeed, that in some of the Swiss can- tons there are houses for compulsory labour, occupying an inter- mediate place between poor-houses and prisons. "In practice," it is said, " they are generally found to be of use." A less quali- fied approval is given to the Prussian plan of taking land and allotting it to a certain number of poor families for the cultivation of the potato. Perhaps the success of such an experiment in Prussia might fairly remind us that there are Acts, passed in the reigns of George III. and William IV., enabling overseers and guardians to em- ploy the poor in cultivating lands ; while there is an Act, passed in the reign of Charles I., which authorises the use of any " trade mystery or occupation " for the purpose of "setting the poor on work and of better relieving them." However, the chief experiment made with this view, as has been once before stated in these columns, was that by which Count Rumford put an end to begging in Munich. It is a serious omission in this volume that Count Rumford's name is not even mentioned in the chapter devoted to Bavaria, although the work he did had not only the greatest effect on the welfare of that country, but an important bearing on the general question of the relief of the poor.