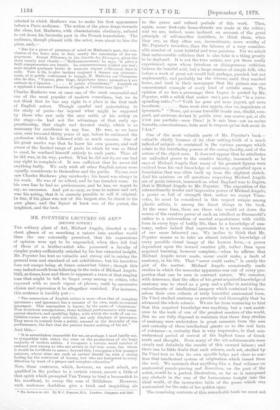 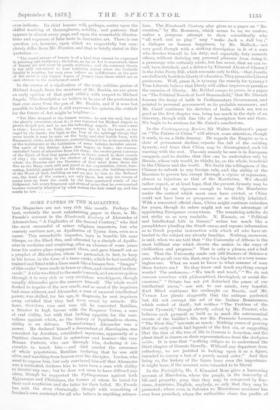 of Art, Michael Angelo, directed a con- stant glance of so searching a nature into another world than the one externally perceived, that his expressions of opinion were apt to be unguarded, when they fell foil of those of a brother-artist who possessed a faculty of simpler poetry sufficiently satisfied by his less extended insight. Mr. Poynter has lent us valuable and strong aid in raising the general tone and standard of art exhibitions ; but his invective does not escape being at times . somewhat bitter ; though this may indeed result from following in the wake of Michael Angelo. Still, at times, here and there is apparent a trace of that rasping tone that might be left to linger away among us critics, who expound with so much vigour of phrase, until by successive elision and repression it be altogether vanished. For instance, this sentence is forcibly put :—

"The mannerism of English artists is more often that of complete ignorance ; and ignorance has a manner of its own, made to conceal ignorance. This mannerism is known by the name of 'cleverness.' That dexterous manipulation, those brilliant performances with trans- parent shadows, and sparkling lights, with which the walls of our ex- hibition-rooms are yearly covered, are only displays of ignorance. They serve to conceal from a public, amazed at the dexterity of the performance, the fact that the painter knows nothing of his art."

" It is nevertheless impossible for me, as perhaps I need hardly say, to sympathise with either the aims or the productions of the largo majority of modern artists. I recognise a certain small number of eminent men among us who are artists in the' true sense, but whom It would be invidious to name; beyond this, I recognise a few younger painters, whose aims are such as artists' should be, with a strong feeling for the sentiment of beauty, but who are hampered in every direction by want of a proper and complete education."

Now, these sentences, which, however, we must admit, arc qualified in the preface to a certain extent, savour a little of that spirit which prompted Van Tromp to bind a broomstick to his masthead, to sweep the seas of Britishers. However, such sentences doubtless give a brisk and inspiriting air " Ton Lectures on Art. By E, .J. Poynter, R.A. London: Chapman and. Hall.

to the grave and refined periods of this work. Then, again, some first-rate home-thrusts are made at the critics ; and we are, indeed, more inclined, on account of the great principle of self-sacrifice doubtless, to think them, when they are, as they often • are, inconsiderate, more worthy of Mr. Poynter's invective, than the labours of a very consider- able number of most faithful and true painters. For we admit that unfavourable criticism that is also false is a thing greatly to be deplored. It is not the true artists, nor yet those really experienced, -upon whom frivolous or disingenuous criticism bedews its baneful acid, but a large number of simple folk, who before a work of great art would feel, perhaps, puzzled, but not unpleasantly, and probably far the reverse, until they reached home, and read in their newspaper that the picture was one concentrated example of every kind of artistic error. The opinion of no less a. personage than Ingres is quoted by Mr.

One of the most valuable parts of Mr. Poynter's book— valuable chiefly because of its clear setting-forth of a much talked-of subject—is contained in the various passages which relate to the interlacing powers of the seeing faculty, and of the nature of the object seen. It does not appear that he attributes an unlimited power to the creative faculty, inasmuch as he says of Michael Angelo that many of his greatest figures were evolved from his vast knowledge of anatomy, engrafted upon a foundation that was often built up from the slightest sketch.

And his opinions on all questions respecting Michael Angelo are of great interest, inasmuch as what Raphael was to Ingres, that is Michael Angelo to Mr. Poynter. The exposition of the extraordinarily tender and impressive power of Michael Angelo, a power so full of strength that, unless we except Tinto- retto, be must be considered in this respect unique among plastic artists, is among the finest things in the book. At the same time, there are those who would set down the source of the creative power of such an intellect as Buonarotti's rather to a universalism of mental acquaintance with visible form in every type of bodily life, than to a knowledge of ana- tomy, unless indeed that expression be a terse enunciation of our more laboured one. We incline to think that Mr. Poynter moans us to infer an almost intuitive knowledge of every possible visual image of the human form,—a power dependent upon the inward creative gift, rather than upon acquired learning, however complete,—when he affirms that Michael Angelo never made, never could make, a fault of anatomy, in his life. That "never could make," is surely the gist of the matter. Michael Angelo occasionally made studies in which the muscular apparatus was out of every pro- portion that can be seen in outward nature. We conceive, with deference, that the office of his great acquired knowledge of anatomy was to stand as a prop and a pillar in assisting the embodiments of intellectual imagery which contained in them- selves their own criteria of truly beautiful anatomical form. Da Vinci studied anatomy so precisely and thoroughly that he advanced the whole science. We are far froniventuring to hint that this acquired knowledge was anything but a vast assist- ance to the work of one of the greatest masters of the world.

But we are fully disposed to maintain that those deep studies

of existence—a curiosity that is very impressive, in that mis- understood period of revival of the highest tones of Greek truth and thought. Even many, of the art-achievements were simply and definitely the results of this onward labour ; and there can be little doubt that each science, each art, studied by Da Vinci lent to him its own specific helps and clues to con-

firm that intellectual system of origination which issued from the soul. We maintain that anything like a final reliance on anatomical puzzle-piecing and dissection, 'on the part of the artist, would be a perfect illustration, so far as it interposed any obstacle in the way of the harmonious insight into the ideal world, of the instructive fable of the goose which was anatomised for the sake of her golden eggs.

'The remaining contents of this remarkable book we must not oven indicate. Its chief lessons will, perhaps, centre upon the skilful teaching of thoroughness, nobility, and patience that appears in almost every page, and upon the remarkable illustra- tions and exposure of false taste in decorative art. There is one question yet, however, upon which we respectfully but corn.; pletely differ from Mr. Poynter, and that is briefly stated in this

"The moral nature of beauty is of a kind that cannot be expressed in painting and sculpture; therefore, as far as Art is concerned, ideas of beauty are and must be purely cesthetic ; and the contrary theory is not only calculated to lead criticisai astray when the tusthetic faculty is wanting, but may even induce an indifference on the part of the artist to any higher forms of beauty than those which are at once obvious to the uneducated mind."

In the course of a vindication of the truly sublime genius of Michael Angelo from the strictures of Mr. Ruskin, we are given an early opinion of that great critic's with respect to Michael Angelo. This description we believe to be one of the profoundest that ever came from the pen of Mr. Ruskin, and if it were but possible to believe that it still expresses his opinion, the outlook for the future of Art might be brighter :—

"Yet Mine stopped at the human nature ; he saw the soul, but not the ghostly presences about it ; it was reserved for Michael Angelo to pierce deeper yet, and to see the indwelling angels. No man's Soul is alone ; Laocoon or TAR, the serpent has it by the heart, or the angel by the hand ; the light or the fear of the spiritaid things that move beside it may be seen on the body, and that bodily form, with Bnonerotti, white, solid, distinct, material though it be, is invariably felt as the instrument or the habitation of some infinite, invisible power. The earth of the Sistine Adam that begins to burn ; the woman- embodied burst of adoration from his sleep ; the twelve great torrents of the Spirit of God that pause above us there, aimed in their vessels of clay ; the waiting in the shadow of futurity of those through whom the Promise and the Presence of God went down from the Eve to the Mary, each still and joyed in his expectation, silent, fore- seeing, faithful, seated each on his strong throne, the building-stones of the Word of God, building on and on,lier by tier, to the Refused one, the head of the corner ; not only these, not only the troops of terror torn up from the earth by the four-quartered winds of the Judgment, but every fragment and atom of stone that be evertenched became instantly inhabited by what makeathe hair stand up, and the words be few