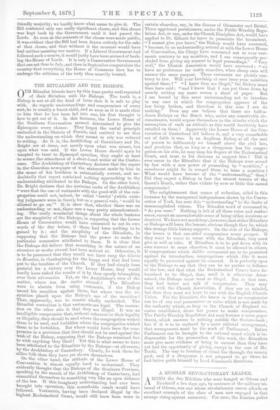 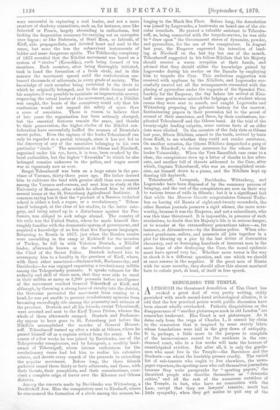 A MONG the five Nihilists who were hanged at Odessa and Nicolaieff a few days ago, by sentence of the military tri- banal of Odessa, was one whose revolutionary career affords an excellent example of the class of men now engaged in that strange rising against autocracy. For once, the Russian police

were successful in capturing a real leader, and not a mere creature of shadowy committees, such as, for instance, men like Solovieff or Fonain, largely abounding in enthusiasm, but lacking the desperation necessary for carrying out an enterprise once begun ; or like Dubrovin, of Staii. Roos, or Izbitski, of Kieff, able propagandists, and devoted heart and soul to the cause, but none the less the subservient instruments of bolder and more dangerous spirits. The Tchikovsky conspiracy of 1873 revealed that the Nihilist movement was based on a system of "circles" (Krocishka), each being formed of ten members. Each member, after being thoroughly initiated, took in hand the formation of a fresh circle, and in this manner the movement spread until the confederation em- braced thousands of adherents, in every grade of society. The knowledge of each member being restricted to the circle to which he originally belonged, and to the circle formed under his auspices, it was possible to maintain an impenetrable secrecy respecting the actual leader of the movement, and, if a Nihilist was caught, the heads of the conspiracy could rely that his confessions would not imperil the safety of more than a score of associates. There is reason to believe that of late years the organisation has been seriously changed, but the essential features remain the same, and thanks to their preservation, the higher circles of the Nihilist con- federation have successfully ,baffled the acumen of Drenteln's secret police. Even the capture of the leader Tchoubaroff can only be regarded as a partial triumph, since it has not led to the discovery of any of the associates belonging to his own particular "circle." The associations at Odessa and Nicolaeff, organised under his eye, have, it is true, been crushed by the local authorities, but the higher " Krooshka" to which he also belonged remains unknown to the police, and wages secret war as vigorously now as ever, Bergai Tchoubaroff was born on a large estate in the pro- vince of Voronez, thirty-three years ago. His father desired him to cultivate the land with greater skill than was common among the Voronez serf-owners, and sent him to study at the University of Moscow, after which he allowed him to attend several terms at the St. Petersburg Agricultural Institute. A common saying has it that the "product of a Russian technical school is either a fool, a rogue, or a revolutionary." Tchou- baroff belonged, at the close of his studies, to the latter cate- gory, and being mixed up in a disturbance against the Pro- fessors, was obliged to seek refuge abroad. The country of his exile was the United States, where he made himself tho- roughly familiar with the democratic system of government, and acquired a knowledge of no less than five European languages. Returning to Russia in 1877, just when the Russian armies were assembling in the camp at Kishineff for the invasion of Turkey, he fell in with Valerian Deutsch, a Nihilist leader, afterwards known as the audacious assailant of the Chief of the Secret Police. Deutsch induced him to accompany him to a locality in the province of Kieff, where, with three other associates—Stefanovitch, Bochanovsky, and Davidenko—he was engaged organising a revolutionary militia among the Tchegerinsky peasants. It speaks volumes for the audacity and skill of these men, that they were able to enrol in their militia as many as 1,200 peasants before intelligence of the movement reached General Tchortkoff at Kieff, and although, by throwing a strong force of cavalry into the district, the Governor prevented the movement from coming to a head, he was yet unable to prevent revolutionary opinions from becoming exceedingly rife among the peasantry and artisans of the province. Deutsch and all his friends, except Tchoubaroff, were arrested and sent to the Kieff Tower Prison, whence the whole of them afterwards escaped. Deutsch and ]3ochanov- sky appear to have gone to St. Petersburg just before the Nihilists accomplished the murder of General Mezent- soff. Tchoubaroff turned up after a while at Odessa, where he passed himself off as a captain retired from the army. In the course of a few weeks he was joined by Davidenko, one of the Tchegerensky conspirators, and by Lezogoub, a wealthy land- owner of Tchernigoff, whose intense enthusiasm for the revolutionary cause had led him to realise his extensive estates, and devote every copeck of the proceeds to extending the popular movement. Before long, the three friends gathered round them thirty or forty adherents, and these, with their threats, their pamphlets, and their assassinations, exer- cised a complete reign of terror over the Kherson and Odessa districts.

Among the converts made by Davidenko was Wittenberg, a Berditcheff Jew. Him the conspirators sent to Nicolaeff, where be commenced the formation of a circle among the seamen be- longing to the Black Sea Fleet. Before long, the Association was joined by Logovenko, a boatswain on board one of the cir- cular ironclads. He proved a valuable assistant to Tchouba- roff, as, being connected with the torpedo-service, he was able to "draw upon" the Government stores of dynamite, powder, and pyroxoline, for the use of the conspirators. In August last year, the Emperor expressed his intention of land- ing at Nicolaeff on the last day but one of the month. Tchoubaroff suggested to his fellow-Nihilists that his Majesty should receive a warm reception at their hands, and advised that they should utilise the knowledge gained by Logovenko during his service on the Danube by employing him to torpedo the Czar. This audacious suggestion was received with applause by the Nihilists, and Logovenko suc- cessfully carried out all the arrangements connected with the placing of pyroxoline under the supports of the Spasskoi Pier. Luckily for the Emperor, the day before his arrival at Nico- laeff some gendarmes mistook the lodgings of a student whose rooms they were sent to search, and caught Logovenko and Wittenberg preparing the galvanic battery for the morrow. Incriminating papers in their possession led to the arrest of several of their associates, and these, by their confessions, im- plicated Tchoubaroff and the Odessa band. At the trial of the twenty-eight leading culprits, some curious facts of an older date were elicited. On the occasion of the July riots at Odessa last year, fifteen Nihilists, armed to the teeth, arrived by train from Kieff, to see whether they could not render assistance. On another occasion, the Odessa Nihilists despatched a gang of men to Kharkoff, to devise measures for the release of the leader Voinoralsky. When the Vera Zassulitch case came to a close, the conspirators drew up a letter of thanks to her advo- cate, and another full of threats addressed to the Czar, after which, Captain Tchoubaroff, who was an accomplished musi- cian, sat himself down to a piano, and the Nihilists kept up dancing till daybreak.

Tchoubaroff, Lezogoub, Davidenko, Wittenberg, and Logovenko have been disposed of by the summary process of hanging, and the rest of the conspirators are now on their way to various terms of exile in Siberia ; but it is a significant fact that while the Moscow Gazette congratulates General Todle- ben on having rid Russia of eight-and-twenty scoundrels, the other Russian journals preserve a rigid silence, the more note- worthy, because it wail the Emperor, and not a subordinate, who was this time threatened. It is impossible, in presence of such revelations, to doubt that his Majesty's life is in serious danger, or to wonder at the extraordinary precautions taken—as, for instance, at Alexandrowo—by the Russian police. When edu- cated gentlemen, sailors, and peasants all join together in a plot for blowing up a pier by the last device of destructive chemistry, and so destroying hundreds of innocent men in the mere hope of also destroying the Czar, the moral epidemic must have spread very far. Whether mere terror is the way to check it is a different question, and one which we should at once answer, in the negative. If the great men of Russia wish for more security, they should allow this almost maniacal hate to exhale part, at least, of itself in free speech.