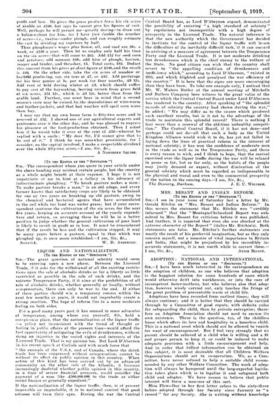 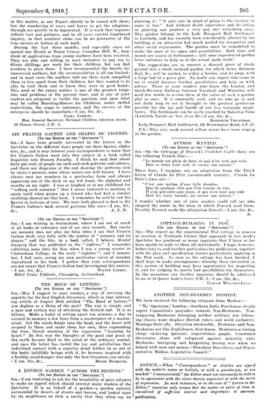 ADOPTION: NATIONAL AND INTERNATIONAL. . [To THE EDITOR OP THE

Sia,—I have been much interested in the correspondence on the adoption of children, as one who believes that adoption is the happiest solution for some hundreds of cases which would otherwise drift into workhouses, or into the care of incompetent foster-mothers, but who believes also that adop- tion, however wisely carried out, only touches the fringe of the great problem of preventable waste of child life.

Adoptions have been recorded from earliest times; they will always continue; and it is better that they should be carried through by a Committee of good repute, with definite rules for safeguarding the child, than by private enterprise; there-- fore an Adoption Association should not need to excuse its own existence. There is the question, tco, of the Childless home which offers its love and hospitality to a homeless child. This is a-national asset which should not be allowed to vanish for want of encouragement. But I feel very strongly that no parent should be relieved - of a child .who IS willing and a - fit and proper person to keep it, or could be induced to make adequate provision with a little encourageriamit and help. And in order that fullest information can be obtained on this subject, it is most. desirable that all Children Welfare Organizations should act in co-operation. We, as a Com- mittee, have never refused to help a suitable child recom- mended by any other Welfare Committee. The work of adop- tion will always be hampered until the long-expected -legisla- tion takes place which is to legalize it and safeguard both child and adopter. - We have reason to believe that public interest will force a measure of this sort.

• Miss Plows-Day in her first letter refers to the sixty-three babies adopted through • her S4)ciety' since Januitry as -" a record-"- for -any• Society. She is writing -without knowledge

in this matter, as our Report shortly to be issued will show; but the numbering of cases -and hurry to get the adoptions through are greatly to be deprecated.. -It is work that requires infinite tact and patience, and in all. cases careful. lengthened inquiry, .so that numbers alone can be no guarantee of the true success or failure of such work. - During the last three months, and especially since we opened our Hostel at Tower Cressy, Campden Hill, W., hun- dreds of applications from young mothers have been received. They are able and willing in most instances to pay ten to fifteen shillings per week for their children, but can find nowhere to place them. I have recommended the hostels for unmarried mothers, but the accommodation is all too limited; and in most cases the mothers told me their work compelled them to live apart from their children, but they wanted to be able to visit them and to know they were in goad hands. This need of the young mother is one of the greatest trage- dies and problems of the present time, and if any of your readers are prepared to tackle the question and open what may be called Boarding-Houses for Children, under skilled supervision, the scope is enormous, and the success of the