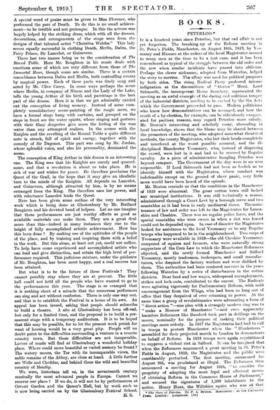 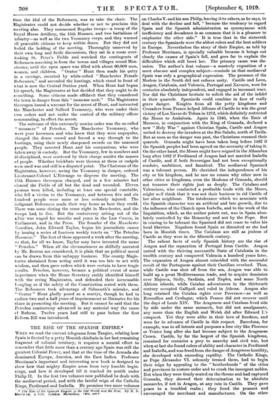 IT is a hundred years since Peterloo, but that sad affair is not yet forgotten. The breaking up of the Reform meeting in Peter's Fields, Manchester, on August 16th, 1819, by Yeo- manry and Hussars at the orders of the local Magistrates seemed

to many men at the time to be a test case, and it has been remembered as typical of the struggle between the old order and the new when similar incidents have passed into oblivion. Perhaps the clever nickname, adapted from Waterloo, helped the story to survive. The affray was used for political purposes by both sides. The rising Radical Party professed intense indignation at the discomfiture of " Orator " Hunt. Lord Sidmouth, the incompetent Home Secretary, represented the meeting as an awful example of the daring and seditious temper of the industrial districts, needing te be curbed by the Six Acts which the Government proceeded to pass. Modern politicians who know how demonstrations can be arranged, and how the result of a by-election, for example, can be ridiculously exagger- ated for partisan reasons, may regard Peterloo more calmly. Mr. Bruton's interesting and scholarly essay, abounding in local knowledge, shows that the blame may be shared between the promoters of the meeting, who adopted somewhat theatrical methods, the county Magistrates, who lost their heads completely and interfered at the worst possible moment, and the ill- disciplined Manchester Yeomanry, who, instead of dispersing the crowd, were lost in it and had to be rescued by Regular cavalry. As a piece of administrative bungling Peterloo was beyond compare. The Government of the day were in no wise responsible. If Lord Sidmouth had not been so foolish as to identify himself with the Magistrates, whose conduct was indefensible except on the ground of sheer panic, very little more would have been heard of the episode.

Mr. Bruton reminds us that the conditions in the Manchester of 1819 were abnormal. The great cotton town still lacked any municipal institutions. It was still technically a manor, Administered through a Court Leet by a borough reeve and two constables as it had been in early mediaeval times. The main- tenance of law and order was left to the Magistrates for Lanca- shire and Cheshire. There was no regular police force, and the special constables who were sworn in when a riot was feared could not be depended upon. In case of disorder the Magistrates looked for assistance to the local Yeomanry or to any Regular troops who happened to be in the neighbourhood. Two corps of Yeomanry were available in 1819—the old Cheshire Yeomanry, composed of squires and farmers, who were naturally strong supporters of the Corn Law to which the Manchester Reformers objected, and the newly formed Manchester and Salford Yeomanry, mostly tradesmen, innkeepers, and small manufac- turers, who despised the factory workers and were disliked by them. The authorities had been rendered nervous in the years following Waterloo by a series of disturbances in the cotton districts. Dear food and low wages, widespread unemployment, strikes and lock-outs, contributed to the unrest. The Radicals were agitating vigorously for Parliamentary Reform, with mild encouragement from the Whigs, who had been so long out of office that they despaired of ever returning to power. At the same time a group of revolutionaries were advocating a form of " direct action "—one plan with a strangely modern ring was to " make a Moscow of Manchester "—and even apparently harmless Reformers like Bamford took part in drillings on the moors, nominally for the purpose of making their political meetings more orderly. In 1817 the Magistrates had had to call in troops to protect Manchester when the " Blanketeers " assembled for their projected march to London to demonstrate on behalf of Reform. In 1818 troops were again requisitioned to suppress a violent riot in Salford. It can be imagined that when the Reformers announced a great meeting in St. Peter's Fields in August, 1819, the Magistrates and the public were considerably perturbed. The first meeting, summoned for August 9th, was proclaimed as illegal. The Reformers then announced a meeting for August 16th, " to consider the propriety of adopting the most legal and effectual means of obtaining Reform in the Commons House of Parliament," and secured the signatures of 1,300 inhabitants to the notice. Henry Hunt, the Wiltshire squire who was at that

• The Story of Peterioo. By F. A. Bruton. Manchester : at the tiniversitY Pre" London : Pal

time the idol of the Reformers, was to take the chair. The Magistrates could not decide whether or not to proclaim this meeting also. They summoned Regular troops—a troop of the Royal Horse Artillery, the 15th Hussars, and two battalions of infantry—as well as the two Yeomanry corps, and they warned 01 peaceable citizens to keep within doors. But they did not forbid the holding of the meeting. Thoroughly unnerved by their own long and futile discussions, they sat in a room over- looking St. Peter's Fields and watched the contingents of Reformers marching in from the towns and villages round Man- chester, until the open space was filled with about 60,000 men, women, and children. Orator " Hunt then made his entry in a carriage, escorted by white-robed " Manchester Female Reformers," and ascended the hustings, which stood in front of what is now the Central Station yard. When Hunt had begun his speech, the Magistrates at last decided that they ought to do something. Some citizens made affidavit that they considered the town in danger from this " immense mob." The Magistrates thereupon issued a warrant for the arrest of Hunt, and instructed the Manchester and Salford Yeomanry, who were under their own orders and not under the control of the military officer commanding, to effect the arrest.

The outcome of this extremely unwise order was the so-called " massacre" of Peterloo. The Manchester Yeomanry, who were poor horsemen and who knew that they were unpopular, charged the dense crowd and forced a way through to the hustings, using their newly sharpened swords on the unarmed people. They arrested Hunt and his companions, who were taken away in custody. But the Yeomanry, few in numbers and ill-disciplined, were scattered by their charge amidst the masses of people. Whether brickbats were thrown at them or cudgels were used was and still is a disputcg point. The Chairman of the Magistrates, however, seeing the Yeomanry in danger, ordered Lieutenant-Colonel L'Estrange to disperse the meeting. The 15th Hussars thereupon charged, and in a few minutes had cleared the Fields of all but the dead and wounded. Eleven persons were killed, including at least one special constable, who fell a victim to the Yeomanry, and between five and six hundred people were more or less seriously injured. The indignant Reformers made their way home as best they could. There was some rioting the same night in Manchester, and the troops had, to fire. But the controversy arising out of the afair was waged for months and years in the Law Courts, in Parliament, and in the Press. The founder of the Manchester Guardian, John Edward Taylor, began his journalistic career by issuing a series of fourteen weekly tracts on The Peterloo Massacre." The first of these appeared a week after the meeting, so that, for all we know, Taylor may have invented the name " Peterloo." When all the circumstances so skilfully narrated by Mr. Bruton are considered, it is plain that no political moral can be drawn from this unhappy business. The county Magis- trates abstained from acting until it was too late to act with wisdom, and then gave orders which were certain to have tragic results. Peterloo, however, became a political event of some importance when the Home Secretary rashly identified himself with the erring Magistrates, and defended their inexcusable bungling as if the safety of the Constitution rested with them. The Reformers took advantage of Sidmouth's mistake, and " Orator" Hunt gladly posed as a martyr, though he had to endure two and a half years of imprisonment at Ilminster for his share in promoting the meeting. But it cannot be said that the Peterloo controversy advanced in any material way the cause d Reform. Twelve years had still to pass before the first Reform Bill was introduced.