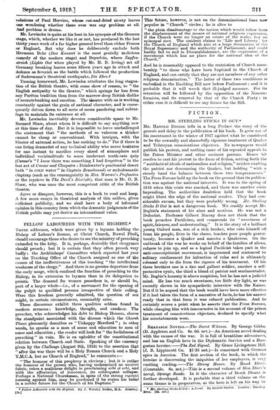 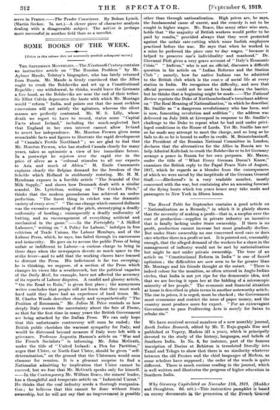 Co. Os. 6d. net.)—An American novel dealing with the causes of the war. It is full of breathless adventures, and has an English hero in the Diplomatic Service and a Hun- garian heroine,—The Bed Signal, By Grace Livingstone Hill. (J, B. Lippincott Co. $1.35 net.)—Is concerned with German spies in America. The first section of the book, in which the heroine is discovering the iniquities of her employers, is very exeiting reading.—The Strong Hours. By Maud Diver. (Constable. 6s. net.)—This is a second volume of Miss Diver's novel, Strange Roads. In it the character of Derek Blount is further developed. It is probable that a third volume on the same theme is in preparation, as the hero is left on his way to • Mr. sterling Stick,/ Zt Out : a If ovel. By itarold Bustle. London : Headley

servo in France.—The Tender Conscience. By Bohun Lynch. (Martin Seeker. 7a. net..)—A clever piece of character analysis dealing with a disagreeable subject. The author is perhaps more successful.in another field than as a novelist.