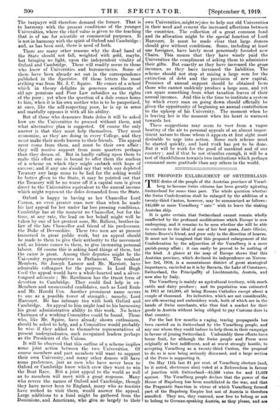 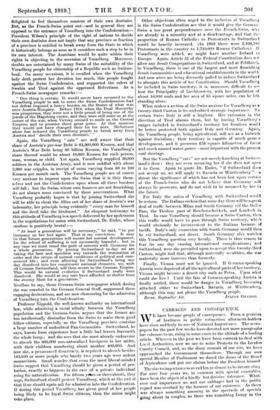 THE PROPOSED ENLARGEMENT OF SWITZERLAND.

THE desire of the people of the Austrian province of Vorarl- berg to become Swiss citizens has been greatly agitating Switzerland for some time past. The whole question whether the Swiss Confederation shall be enlarged by the addition of a twenty-third Canton, however, may be summarized as follows : 145,000 or more Vorarlberg " rats " wish to leave the sinking Austrian ship.

It is quite certain that Switzerland cannot remain wholly unaffected by the profound modifications which Europe is now undergoing, and it remains to be seen whether she will be able to conform to the ideal of one of her best poets, Juste Olivier, Sainte-Beuve's friend, and grow only in the direction of heaven. It must not be imagined that this proposed enlargement of the Confederation by the adjunction of the Vorarlberg is a mere parish-pump affair ; it can easily be proved to be nothing of the kind. A glance at the map of Europe shows that this Austrian province, which declared its independence on Novem- ber 3rd, 1918, is a mountainous district of great strategical importance, encircled as it is by Bavaria, the Lake of Constance, Switzerland, the Principality of Liechtenstein, Austria, and now also by Italy.

The Vorarlberg is mainly an agricultural territory, with much cattle and dairy produce ; and its population was estimated in 1911 at 145,000, all being Roman Catholics except about a couple of thousand. Its industries, which are not considerable, are silk-weaving and enibroidery work, both of which are in the hands of Swiss merchants, who thus find a market for their goods in Austria without being obliged to pay Customs dues in that country.

For the last few months a r aging, tearing propaganda has been carried on in Switzerland by the Vorarlberg people, and any one whom they could induce to help them in their campaign in favour of joining Switzerland. Undeniably these efforts have borne fruit, for although the Swiss people and Press were originally at best indifferent, and at worst strongly hostile, to accepting Vorarlberg as a twenty-third Canton, the proposal to do so is now being seriously discussed, and a large section of the Press is supporting it.

On May 11th last 81 per cent. of Vorarlberg electors (and, be it noted, electresses also) voted at a Referendum in favour of junction with Switzerland-45,568 votes for and 11,029 against. The Vorarlberg people declare that the power of the House of Hapsburg has been annihilated in the war, and that the Pragmatic Sanction in virtue of which Vorarlberg formed part of the Hapsburg Empire but not of Austria is therefore annulled. They are, they contend, now free to belong or not to belong to German-speaking Austria, as they please, and are

delighted to feel themselves masters of their own destinies. But,' as the French-Swiss point out—and in general they are

opposed to the entrance of Vorarlberg into the Confederation—

President Wilson's principle of the right of nations to decide their own destinies does not imply that any province or fraction of a province is entitled to break away froth the State to which it historically belongs as soon as it considers such a step to be in its own interest. The Austrians would be quite within their

rights in objecting to the secession of Vorarlberg. Moreover, doubts are entertained by many Swiss of the suitability of the

Vorarlberg people for citizenship of a Republic such as Switzer- land. On many occasions, it is recalled when the Vorarlberg lady doth protest her devotion too much, this people fought against the Swiss Confederates, and supported the rulers of Swabia and Tirol against the oppressed Helvetians. As a French-Swiss newspaper remarks :- " One thing is certain. It would never have occurred to the Vorarlberg people to ask to enter the Swiss Confederation had not defeat imposed a heavy burden on the States of what was once Austria-Flungary. Before 1914, when the Dual Monarchy was prosperous, they were not a little proud of being one of the jewels of the Hapsburg crown, and they were still more so at the outset of the war, when Victory seemed to smile on the Central Empires and to promise them great gains. At that moment they would not have changed their lot for ours. Misfortune alone has induced the Vorarlberg people to break away from Austria and ' decide their own destinies.' " Again, the Vorarlberg " rats " are well aware that their share of Austria's pre-war Debt is 64,000,000 Kronen, and that Austria's War Debt being 88 billion Kronen, the Vorarlberg's share thereof would be about 10,000 Kronen for each person, man, woman, or child. Yet again, Vorarlberg supplied 30,000 soldiers to the Austrian Army, and is now saddled with about 2,000 war cripples, in receipt of sums varying from 80 to 100 Kronen per month each. The Vorarlberg people are of course very anxious to impress upon the Swiss that it is they them- selves and not the Confederates upon whom all these burdens will fall ; but the Swiss, whose own finances are not flourishing, do not always seem convinced by these asseverations. What Vorarlberg probably hopes is that by joining Switzerland she will be able to cheat the Allies out of her share of Austria's war indemnity, her principle being evidently " every man for himself and the devil take the hindmost." An eloquent testimony to this attitude of Vorarlberg is a speech delivered by her spokesman in the negotiations for union with Switzerland, Dr. Ender, whose candour is positively brutal :-

" At least a generation will be necessary," he said, " to put Germany on her feet again. That is my conviction. It may be that future generations will ensure her normal development, for the school of suffering is not necessarily harmful ; but in any *case we must tread the path of sorrows with Germany for a whole generation. By joining Switzerland to-day we are taking the best and speediest way towards the restoration of order and the return of normal conditions of political and com- mercial life ; and even allowing for Switzerland's being one day dissolved into her constituent national elements, we, with all German Switzerland, will then revert to the German Empire. This would be natural evolution if Switzerland really were dissolved. She would at any rate have afforded us shelter from the stormy blast for a generation."

Needless to say, those German-Swiss newspapers which during the war crawled to the German General Staff, suppressed these engaging declarations, and are now clamouring for the admission of Vorarlberg into the Confederation.

Professor Nippold, the well-known authority on international law, while admitting a racial affinity between the Vorarlberg population and the German-Swiss, argues that the former are

too intellectually dissimilar from the Swiss to make, them good fellow-citizens, especially as the Vorarlberg province contains a large number of undoubted Pan-Germanists. Switzerland, he says, knows from experience how-a little bad leaven leaveneth the whole lump ; and she sees that she must already endeavour

to absorb the 600,000 non-naturalized foreigners in her midst, with their children numbering about another 400,000. And now she, a pronounced democracy, is required to absorb besides 145,030 or more people who barely two years ago were ardent. monarchists. Small wonder that even the most liberal-minded Swiss suggest that Vorarlberg should be given a period of pro- bation, exactly as happens in the case of a private individual suing for naturalization. For fifteen yellers or thereabouts, they urge, Switzerland should protect Vorarlberg, which at the end of that time should again ask for admission into the Confederation. If during this period. Vorarlberg has given proof of her people being likely to be loyal Swiss citizens, then the union might take place. Other objections often urged to the inclusion of Vorarlberg in the Swiss Confederation are that it would give the German- Swiss a too great preponderance over the French-Swiss, who are already in a minority and at a disadvantage, and that the proportion of Roman Catholics to Protestants in Switzerland would be heavily increased. (In 1910 there were 2,103,591 Protestants in the country to 1,730,000 Roman Catholics.) If Vorarlberg were added, we might have another Ireland i Europe. Again, Article 51 of the Federal Constitution does not allow any Jesuit Congregations in Switierland, and at Feldkirch. in Vorarlberg. there is one of the largest and most flourishing Jesuit communities and educational establishments in the world. And now wires are being discreetly pulled to induce Switzerland to abrogate this article of her Constitution. Should Vorarlberg be included in Swiss territory, it is, moreover, difficult to see how the Principality of Liechtenstein, with her population of about 10,000 souls and her area of 65 square miles, can be left standing alone.

What makes a section of the Swiss anxious for Vorarlberg as a twenty-third Canton is its undoubted strategic importance. To certain Swiss Italy is still a bugbear. Her extension in the direction of Tirol alarms them, but by having Vorarlberg's ranges included in Switzerland's territory her frontiers woul I be better protected both against. Italy and Germany. Again, the Vorarlberg people, being agricultural, will act. as a bulwark against -Socialism ; their territory is capable of much greater development, and it possesses 676 square kilometres of forest and much unused water-power—most important with the present coal shortage.

But the Vorarlberg "rats" are not merely knocking at Switzer- land's door : they are even menacing her if she does not open it to them. Again to quote Dr. Ender, " if Switzerland does not accept us, we will apply to Bavaria or Wurttemberg "—a threat the significance of which has not been lost upon certaie of the French-Swiss who do not believe that Germany will always lie prostrate, and do not wish to be menaced by her in the future.

For Italy the union of Vorarlberg with Switzerland woul I be serious. The Italians reckon that sonic day there will be a great deal of traffic between Milan and South Germany via the Orator Pass, the Tirolese pass of Reschenscheideek, and Landeck ie Tirol. In case Vorarlberg should become a Swiss Canton, then this traffic would have to pass through Swiss territory, which would obviously be inconvenient to the Italians because of tariffs. Italy's only connexion with South Germany would then be rid Switzerland, not direct. South Germany a ISO watches this Vorarlberg question very keenly. There is thus reason to fear its one day causing international complications ; and Switzerland, were she prevailed upon to accept this twenty-third Canton, might find that, although materially wealthier, she was materially more insecure than formerly.

Finally, Vienna must not be ignored. If German-speaking Austria were deprived of all the agricultural parts of her territory, Vienna might become a desert city such as Petra. Upon what could she live ? Until the fate of German-speaking Austria is finally settled, there would be danger in Vorarlberg becoming attached either to Switzerland, Bavaria, or Wurttemberg, although this may not please the Vorarlberg people.