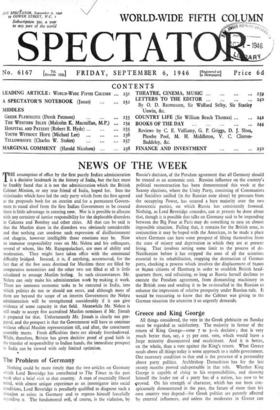 NEWS OF THE WEEK T HE assumption of office by the

first purely Indian administration is a decisive landmark in the history of India, but the fact must be frankly faced that it is not the administration which the British Cabinet Mission, or any true friend of India, hoped for. Into the vicissitudes which have led the only party which from the first agreed to the proposals both for an interim and for a permanent Govern- ment to stand aloof from the first Indian Government to be created there is little advantage in entering now. Nor is it possible to allocate with any certainty of justice responsibility for the deplorable disorders in Calcutta and Bombay and other cities. All that can be said is that the Muslim share in the disorders was obviously considerable and that nothing can condone such expression of disillusionment and chagrin, however intelligible those emotions may be. Now an immense responsibility rests on Mr. Nehru and his colleagues, several of whom, like Mr. Rajagopalachari, are men of ability and moderation. They might have taken office with the communal difficulty bridged. Instead, it is, if anything, accentuated, for the fact that of the five seats destined for Muslims three are filled by comparative nonentities and the other two not filled at all is little calculated to assuage Muslim feeling. In such circumstances Mr. Nehru can only make his administration work by making it work. -There are immense economic tasks to be executed in India, into which politics do not or should not enter, and although most of them are beyond the scope of an interim Government the Nehru administration will be strengthened considerably if it can give evidence of some capacity in that field. Meanwhile Mr. Nehru is still ready to accept five accredited Muslim nominees if Mr. Jinnah is prepared for that. Unfortunately Mr. Jinnah is clearly not pre- pared, and the prospect is that the Government will have to continue without official Muslim representation till, and after, the constituent assembly meets. Fresh difficulties there are already foreshadowed. While, therefore, Britain has given decisive proof of good faith in the transfer of responsibility to Indian hands, the immediate prospect in India can be viewed with only limited optimism.