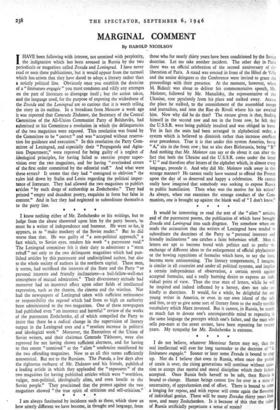 By HAROLD NICOLSON • HAVE been following with interest, not unmixed with perplexity, ▪ the indignation which has been aroused in Russia by the two periodicals or magazines railed Zvesda and Leningrad. I have never read or seen these publications, but it would appear from the turmoil which has arisen that they have dared to adopt a literary rather than a strictly political line. Obviously once you establish the doctrine of a" litterature engagge " you must condemn and vilify any attempts on the part of literature to disengage itself ; but the action taken, and the language used, for the purpose of exposing the wickedness of the Zvesda and the Leningrad are so curious that it is worth telling the story in its outline. In a broadcast from Moscow a week ago it was reported that Comrade Zhdanov, the Secretary of the Central Committee of the All-Union Communist Party of Bolsheviks, had submitted to his Committee a resolution in which the delinquencies of the two magazines were exposed. This resolution was found by the Committee to be " correct " and was "accepted without reserva- tion for guidance and execution." In this resolution the Party Com- mittee of Leningrad, and especially their "Propaganda and Agita- tion Department," were reproved for being guilty of a neglect of ideological principles, for having failed to exercise proper super- vision over the two magazines, and for having "overlooked errors of the first order committed by the editorial staff." And what were these errors? It seems that they had "consigned to oblivion" the rules laid down by Stalin and Lenin regarding the political impor- tance of literature. They had allowed the two magazines to publish articles "by such dregs of authorship as Zoshchenko." They had printed "empty and decadent poetry, exquisite in form but false in content." And in fact they had neglected to subordinate themselves to the party line. * * * I know nothing either of Mr. Zoshchenko or his writings, but to judge from the abuse showered upon him by the party bosses, he must be a writer of independence and humour. He went so far, it appears, as to "make mockery of the Soviet reader." But he did worse than that. He was guilty of "a non-political approach," a fact which, to Soviet eyes, renders his work "a putrescent void." The Leningrad committee felt it their duty to administer a "stern rebuff" not only to the two delinquent magazines which had pun- lished articles by this putrescent and undisciplined author, but also to the whole society of authors in the northern capital. These men, it seems, had sacrificed the interests of the State and the Party " to personal interests and friendly inclinations—a hail-fellow-well-met atmosphere of mutual admiration." Their diversionary attitude had moreover had an incorrect effect upon other fields of intellectual expression, such as the theatre, the cinema and the wireless. Nor had the newspapers of Leningrad taken with sufficient seriousness or responsibility the reproof which had from so high an authority been administered to the two magazines. One of these newspapers had published even "an incorrect and harmful" review of the works of the putrescent Zoshchenko, all of which compelled the Party to insist that there be a radical change in the supervision of literary output in the Leningrad area and a "resolute increase in politicni and ideological work." Moreover, the Executives of the Union of Soviet writers, and their chairman Comrade Tikhonov, were also reproved for not having shown sufficient alertness, and for having to that extent " connived " at the " alien " tendencies manifested by the two offending magazines. Now to us all this seems sufficiently nonsensical. But not to the Russians. The Pravda, a few days after the righteous outburst of Mr. Zhdanov and his friends, published a leading article in which they applauded the " exposures " of the two magazines for having published articles which were "worthless, vulgar, non-political, ideologically alien, and even hostile to the Soviet people." They proclaimed that the protest against the two magazines showed "the true spirit of criticism and self-criticism." * * * I am always fascinated by incidents such as these, which show us how utterly different we have become, in thought and language, from

those who for nearly thirty years have been conditioned by the Soviet doctrine. Let me take another incident. The other day in Par;s there was an official celebration of the second anniversary of th. liberation of Paris. A stand was erected in front of the Hotel de Ville. and the senior delegates to the Conference were invited to grace the proceedings with their presence. At the moment, however, when M. Bidault was about to deliver his commemorative speech, Mr. Molotov, followed by Mr. Manuilsky, the representative of the Ukraine, rose petulantly from his place and stalked away. Across the place he stalked, to the astonishment of the assembled troops and journalists, and into the Rue de Rivoli where his car awaited him. Now why did he do that? The excuse given is that, finding himself in the second row and not in the front row, he felt that the U.S.S.R. were being publicly insulted and was obliged to leave Yet in fact the seats had been arranged in alphabetical order, a system which is believed to diminish rather than increase conflicts over precedence. True it is that under this system America, being "A," sits in the front row ; but so also does Bielorussia, being "B." And nothing that Mr. Molotov can say or do about it can alter the fact that both the Ukraine and the U.S.S.R. come under the letter " U " and therefore after letters of the alphabet which, in almost every language, precede it. And why did Mr. Molotov stalk away in this strange manner? He cannot really have wanted to offend the French upon the day of so deserved and happy a celebration. He cannot really have imagined that somebody was seeking to expose Russ:a to public humiliation. Then what was the motive for his action? As always, when one examines the strange conduct of the Com- munists, one is brought up against the blank wall of "I don't know."

It would be interesting to read the text of the " alien " articles, and of the putrescent poems, the publication of which have brought Zvesda and Leningrad into such disgrace. Yet somehow when one reads the accusation that the writers of Leningrad have tended lo subordinate the doctrines of the Party to "personal interests and friendly inclinations" one catches a faint bohemian whiff. Men ef letters are apt to become bored with politics and to prefer th,- exchange of different ideas to the enlargement of official phylacteries or the bowing repetitions of formulas which have, to say the least, become most uninteresting. The literary temperament, I imagine, is similar in all countries and under all political systems, and implies a certain independence of observation, a certain, revolt against accepted formulas, and a really burning desire to express an indi- vidual point of view. Thus the true man of letters, while he will be inspired and indeed inflamed by a heresy, does not take to kindly to doctrines. It would, for a while, be delightful for any

young writer in America, or even in our own island of the safe and free, to try to give some sort of literary form to the really terrible vocabulary which Marx invented. But it cannot, in Russia, be nearly as much fun to devote one's unconquerable mind to repeating in the same language the precepts which one's father, and the man wh9 sells pea-nuts at the street corner, have been repeating for twenty years. My sympathy for Mr. Zoshchenko is extreme.

I do not believe, whatever Monsieur Sartre may say, that the real intellectual will ever for long surrender to the doctrine of "fa litterature engagee.." Sooner or later some Zvesda is bound to crop up. Nor do I believe that even in Russia, when once the penal of strain is over, the rising generations will continue without ques- tion to accept that mental and moral discipline which their fathers accepted. Once Russia feels herself to be safe, then Russia is bound to change. Human beings cannot live for ever in a state of uncertainty, of apprehension and of effort. There is bound to come a longing for repose, and with repose will come again the flowering of individual genius. There will be many Zvesdas thirty years from now, and many Zoshchenkos. Is it because of this that the rulers of Russia artificially perpetuate a sense of strain?