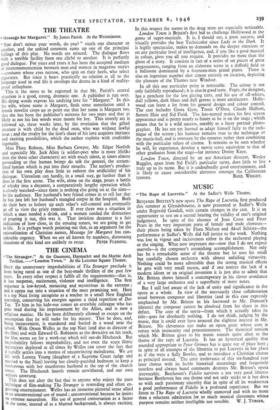 Message for Margaret." By James Parish. At the Westminster.

"You don't mince your words, do you?" snarls one character to another, and the unkind comment sums up one of the principal failings of this play. No words are minced. The dialogue flows with a terrible facility from one cliché to another. It is perfectly good dialogue. For years and years it has been the accepted medium of intercommunication between men and women in magazine stories —creatures whose eyes narrow, who spin on their heels, who select cigarettes. But since it bears practically no relation at all to the language used in real life it envelops the drama in a kind of reality- proof cellophane. This is the more to be regretted in that Mr. Parish's central situation is a good, strong, dramatic one. A publisher is run over. His dying words express his undying love for "Margaret." In this his wife, whose name is Margaret, finds some consolation until a female novelist crops up to point out that her name is Margaret too, that she has been the publisher's mistress for two years and that as likely as not his last words were meant for her. This sisterly act is followed up, three weeks later, by the revelation that the gifted creature is with child by the dead man, who was without lawful issue ; and the rivalry for the lion's share of his love acquires intricate and exciting possibilities, which the author exploits with creditable ingenuity.

Miss Flora Robson, Miss Barbara Cowper, Mr. Edgar Norfolk and especially Mr. Jack Allen (a soldier-poet who is more lifelike than the three other characters) act with much talent, at times almost persuading us that human beings do talk the genteel, the stream- lined fustian which is put into their mouths. The author's produc- tion of his own play does little to redeem the artificiality of his dialogue. Unrealism can hardly, in a small way, go further than it does in the first scene. The wife, alone on the stage, pours a bottle of whisky into a decanter, a comparatively lengthy operation which is closely watched—since ;here is nothing else going on at the time— by the audience. Her husband's best friend comes in to tell her that he has just left her husband's mangled corpse in the hospital. Both do their best to bolster up each other's self-control and eventually go off to view the grisly remains. If ever there was a situation in which a man needed a drink, and a woman needed the distraction of pouring it out, this was it. That inviolate decanter is a fair indication of how close, in the ensuing scenes, we are going to get to life. It is perhaps worth pointing out that, as an argument for the rationalisation of Christian names, Message for Margaret has con- siderable cogency. When we are all known by numbers' distressing situations of this kind are unlikely to recur. PETER FLEMING.