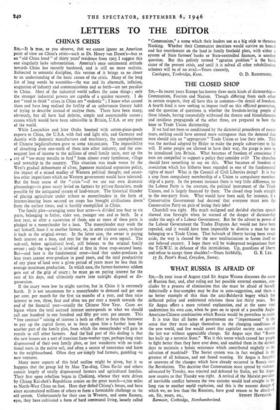 Snt,—In recent years Europe has known three main kinds of dictatorship— Communism, Fascism and Nazism. Though differing from each other in certain respects, they all have this in common—the denial of freedom. A fourth kind is now seeking to impose itself on this afflicted generation, and the question of questions is whether the freedom-loving people of these islands, having successfully withstood the threats and blandishments and insidious propaganda of the other three, are prepared to bow the knee to Trade Union dictatorship.

If we had not been so conditioned by the dictatorial precedents of recent years, nothing could have seemed more outrageous than the demand that men should join an " appropriate " Trade Union or lose their jobs. This was the method adopted by Hitler to make the people subservient to his will. If some people are allowed to have their way, the purge is now to be introduced into Britain. What becomes of freedom of conscience if men are compelled to support a policy they consider evil? The churches should have something to say on this. What becomes of freedom of association which has hitherto been regarded as one of the fundamental rights of man? What is the Countil of Civil Liberties doing? It is but a step from compulsory membership of a Union to compulsory member- ship of a party. In the present instance there is very little difference, for the Labour Party is the creature, the political instrument of the Trade Unions, and is largely financed by them. The closed shop leads straight to the one-party State. What would have been said, for instance, if a Conservative Government had decreed that everyone must join the Conservative Party on Pain of losing their jobs?

Churchill was right. His much maligned and derided election speech showed true foresight when he warned of the danger of dictatorship under the aegis of a Labour Government. But for the advent to power of the Labour Government the Trades Disputes Act would not have been repealed, and it would,have been impossible to dismiss a man for not belonging to a Trade Union. That bulwark of liberty having been swept aside, the way is cleared for the new totalitarianism to fasten itself on our beloved country. I hope there will be widespread resignations from the T.G.W.U. in defiance of this intimidation. Up, guardians of liberty and refuse to accept these shacIdes1—Yours faithfully, G. E. LEE. is Sr. Peter's Road, Croydon, Surrey.