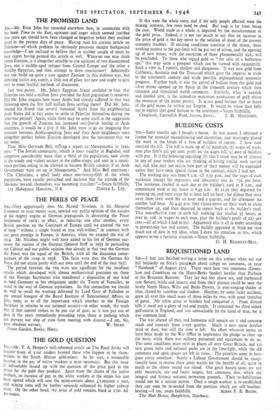 SIR,—Sortie months ago I bought a house. In due course I obtained a licence for essential reconditioning and decoration, and trustingly placed the work in the hands of a firm of builders of repute. I have now received the bill. The bill is made up of (a) materials, (b) wages of work- men plus firm's 221 per cent, profit on the wages bill, (c) cost of holidays with pay. It is the following regarding (b) that I think may be of interest_ to any of your readers who are thinking of having similar work carried out, and who may not realise how part of their money will be expended unless they have some special clause in the contract, which I had not.

The working day was from 8 a.m. till 5.30 p.m., and the wage of each workman (except for improvers and labourers) was 2s. 71d. per hour. The workmen clocked in each day at the -builder's yard at 8 a.m., and commenced work at my house at 8.45 a.m. At 10.30 they departed for morning tea, and were away for at least half an hour ; for dinner they were away from their work for an hour and a quarter, and for afternoon tea another half hour. At 4.45 p.m. they closed down on their work to clean themselves up, and then departed to report back at the builder's yard. This non-effective time in each full working day totalled 31 hours, or over 9s. iod. in wages to each man, plus the builder's profit of 22i per cent.—all of which I had to pay. Apparently this is all in order according to present-day law and custom. The builder appeared to think me very much out of date in my ideas, when I drew his attention to this, which appears to me a fantastic situation.—Yours faithfully,