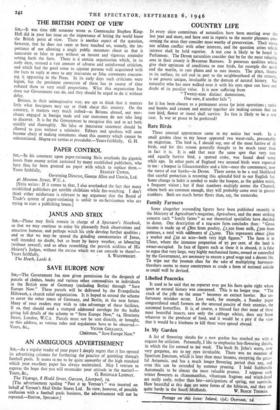 Three unusual appearances came to my notice last week. In a small garden close to my house appeared two water-rails, presumably on migration. The bird is, I should say, one of the most furtive of all birds, and for this reason generally thought to be much rarer than in fact it is. It is odd that near the same spot that very rare and equally furtive bird, a spotted crake, was found dead some while ago. In other parts of England two unusual birds were reported to me: a hoopoe in Gloucestershire and a kite—once the commonest, now the rarest of our hawks—in Devon. There seems to be a real likelihood that careful protection is restoring this splendid bird to our English list. Some change in habit is needed to make the hoopoe, as the golden oriole, a frequent visitor ; but if their numbers • multiply across the Channel, *here both are common enough, they will probably come over in greater numbers. Both are much better flyers than, say, the corncrake.