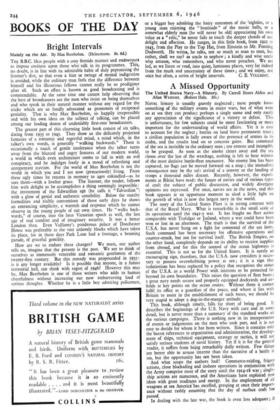 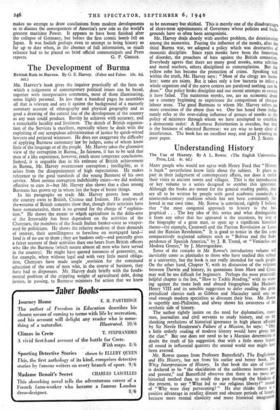 NAVAL history is -usually gravely neglected ; most people know something of the military events in major wars, but of what went

on at sea they can produce perhaps a single name and only rarely any appreciation of the significance of a victory or defeat. This is unfortunate, for few subjects could be more fascinating or more important for the understanding of world affairs. Yet it is easy to account for the neglect ; battles on land leave permanent trace ; a civilian population is fully aware of the presence of armies in its midst, and the results lead on to concrete gains. But command

of the sea is invisible to the ordinary man ; too remote and intangible to be grasped. As soon as the smoke clears away and the sea

closes over the last of the wreckage, nothing is left to bear witness of the most decisive battle-fleet encounter. No enemy line has been captured, no flags can be moved forward on a map ; the immediate consequence may be the safe arrival of a convoy or the landing of troops a thousand miles distant. Recently, however, the experi- ments at Bikini have made the future of navies and of various types of craft the subject of public discussion, and widely divergent opinions are expressed. For once, navies are in the news, and this book appears at an opportune moment to shed a little light on the growth of what is .now the largest navy in the world.

The story of the United States Fleet is in strong contrast with that of the Royal Navy. What is remarkable is the small scale of its operations until the 1941-5 war. It has fought no fleet actioa comparable with Trafalgar or Jutland, where a war could have been won or lost in an afternoon. The truth is that the survival of the U.S.A. has never hung on a fight for command of the sea lanes.

Such command has been necessary for offensive operations and counter-attack, but not for survival itself. The British Empire, on the other hand, completely depends on its ability to receive supplies from abroad, and for this the control of the ocean highways is essential. This is not so for the United States. It is surely an encouraging sign, therefore that the U.S.A. now considers it neces- sary to possess overwheliing power at sea ; it is a sign that isolationism has been replaced by a policy that recognises the status of the U.S.A. as a world Power with interests to be protected far beyond its own boundaries. This raises the question of fleet bases ; a great navy needs secure and properly equipped dockyards and air- fields at key points on the ocean routes. Without them it cannot fulfil its office as a guardian of the peace, and where it lies with Britain to assist in the establishment of such bases, we should be very stupid to adopt a dog-in-the-manger attitude. This book, although timely, falls far short of being good. It describes the beginnings of the U.S. Navy with care and in some

detail, but is never more 'than a summary of the standard works on

the various campaigns. :There is nothing new in its interpretation of events or judgements on the men who took part, and it is not easy to decide for whom it has been written. Since it contains only the barest references to organisation and administration, the develop- ment of ships, technical equipment, strategy or tactics, it will not satisfy serious students of naval history. Yet if it is for the general reader, it suffers from being remarkably dully written. Few things are better able to arouse interest than the narrative of a battle at sea, but the opportunity has not been taken.

And what scope the authors had! Commerce-raiding, frigate actions close blockading and inshore operations in conjunction with the Army comprise most of the story until the 1914-18 war ; single- ship actions are numerous, and the Americans have exploited new ideas with great readiness and energy. In the employment of air weapons at sea Amend' has excelled, grasping at once their import- ance without rashly assuming that the day of surface craft has passed.

In dealing with the late war,, the book is even less adequate ; it

makes no attempt to draw conclusions from modem developments or to discuss the consequences of America's new role as the world's greatest maritime Power. It appears to have been finished after the collapse of Germany, but before the first atomic bomb fell on Japan. It was foolish perhaps even to attempt to bring history so far up to date when, in the absence of full information, so much reliance had to be placed on brief official communiques and Press