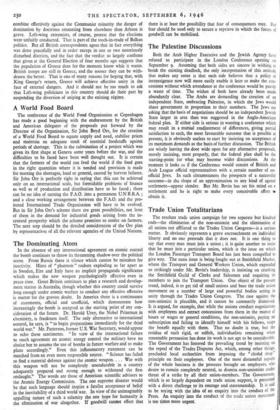 In the absence of any international agreement on atomic control the bomb continues to throw its threatening shadow over the political scene. From Russia there is silence which cannot be mistaken for inactivity. Hints of " phantom " rockets exploding as far apart as in Sweden, Eire and Italy have an implicit propaganda significance which makes the new weapon psychologically effective even in peace time. Great Britain continues to plan a research and develop- ment station in Australia, though whether this country could survive long enough under atomic warfare to conduct any effective offensive is matter for the gravest doubt. In America there is a continuance of statements, official and unofficial, which demonstrate how increasingly the bomb is accepted as the starting point of any con- sideration of the future. Dr. Harold Urey, the Nobel Prizeman in chemistry, is frankness itself. The only alternative to international control, he says, is "to begin preparations immediately for the third world war." Mr. Patterson, former U.S. War Secretary, would appear to echo these sentiments. "In view of the international failure to reach agreement on atomic energy control the military have no choice but to assume the use of bombs in future warfare and to make plans accordingly." Even this inflammatory statement can be matched from an even more responsible source. "Science has failed to find a material defence against the atomic weapon. . . . War with this weapon will not be completely unendurable in a country adequately prepared and strong enough to withstand the first onslaught." The words are those of American scientific advisers to the Atomic Energy Commission. The one supreme disaster would be that such language should inspire a fatalist acceptance of belief in the inevitability of a third world war. In view of the unimaginably appalling nature of such a calamity the one hope for humanity is the elimination of war altogether. If goodwill cannot effect that

there is at least the possibility that fear of consequences may. But fear should be used only to secure a reprieve in which the forces of goodwill can be mobilised.