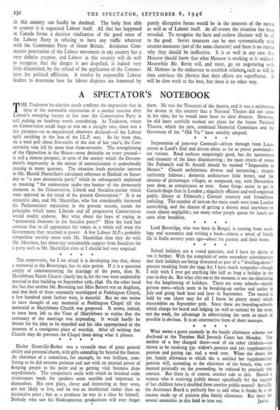 Page 4, 6 September 1946 — Impressions of post-war Cornwall—driven through from Laun- ceston to Land's
Close

End and driven about so far as petrol permitted— are various. Road surfaces surprisingly good, but the narrowness and sinuosity of the lanes disconcerting ; the main streets of towns like Falmouth and St. Austell should be marked "Impassable to Motors." Church architecture diverse and interesting ; chapels uniformly hideous ; domestic architecture little better, and the absence of picturesque villages, as compared, say, with Devonshire next door, as conspicuous as ever. Some things easier to get in Cornish shops than in London ; singularly efficient and well-organised public library at Falmouth ; Cornish courtesy and friendliness unfailing. The number of cars on the main roads west from London astonishing, and the chance of getting a decent meal anywhere en route almost negligible; too many other people queue for lunch too soon after breakfast.