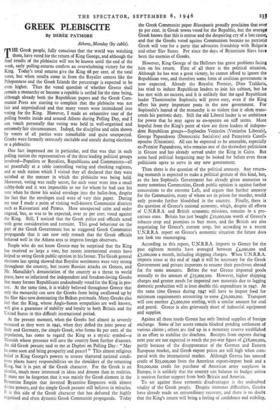 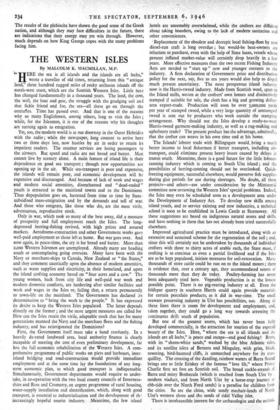 THE Greek people, fully conscious that the world was watching them, have voted for the return of King George, and although the final results of the plebiscite will not be known until the end of the week, early polling-returns confirm an overwhelming victory for the King. Today's total returns give the King 68 per cent, of the total votes, but when results come in from the Royalist centres like the Peloponnese and the Greek Islands the percentage is expected to be even higher. Thus the vexed question of whether Greece shall remain a monarchy or become a republic is settled for the time being, although already both the Republican papers and the Greek Com- munist Press are starting to complain that the plebiscite was not fair and unprejudiced and that many voters were intimidated into voting for the King. However, I made an exhaustive tour of the polling booths inside and around Athens during Polling Day, and I can vouch personally that voting was held in well-organised and extremely fair circumstances. Indeed, the discipline and calm shown by voters of all parties were remarkable and quite unexpected. Greeks were formerly extremely excitable and unruly during elections or a plebiscite.

One fact impressed me in particular, and that was that in each polling station the representatives of the three leading political groups involved—Populists or Royalists, Republicans and Communists—all sat peacefully at a table controlling voting and checking registers, and at each station which I visited they all declared that they were satisfied at the manner in which the plebiscite was being held. Moreover, voting was really secret, for each voter went into a small cubby-hole and it was impossible to see for whom he had cast his vote when he threw his sealed envelope into the ballot-box, despite the fact that the envelopes used were of very thin paper. During my tour I made a point of visiting well-known Communist districts such as Kaissariani and Pirmus. Here unexpected calm and order reigned, but, as was to be expected, over 5o per cent, voted against the King. Still, I noticed that the Greek police and officials acted with great consideration and restraint. This good behaviour on the part of the Greek Government has so staggered Greek Communist propaganda that it can now only remark that the Greek officials behaved well in the Athens area to impress foreign observers.

People who do not know Greece may be surprised that the King has received so large a vote, but recent international events have helped to swing Greek public opinion in his favour. The Greek general elections last spring showed that Royalist sentiments were very strong throughout the country, but recent Russian attacks on Greece, and Mr. Manuilslcy's denunciation of the country as a threat to world peace, have so infuriated the independent and freedom-loving Greeks that many former Republicans undoubtedly voted for the King in pro- test. At the same time, it is widely believed throughout Greece that only the monarchy can save the Greeks from being swallowed up by the Slav bloc now dominating the Balkan peninsula. Many Greeks also feel that the King, whose Anglo-Saxon sympathies are well known, will give a guarantee of stability and loyalty to both Britain and the United States in this difficult international period.

At the present moment, when the Greeks feel almost as severely menaced as they were in 1941, when they defied the joint power of Italy and Germany, the simple Greek, who forms 8o per cent, of the Population, has come to regard the King as a mystic symbol—a Messiah whose presence will save the country from further disasters. An old Greek peasant said to me at Daphni on Polling Day: " May he come soon and bring prosperity and peacet This almost religious belief in King George's powers to restore shattered national condi- tions places heavy responsibilities on the shoulders of the returning King, but it is part of the Greek character. For the Greek is an idealist, much more interested in ideas and dreams than in realities. It must not be forgotten. that it was mainly the Greek element in the Byzantine Empire that invested Byzantine Emperors with almost divine powers, and the simple Greek peasant still believes in miracles. It is this side of the Greek character that has defeated the highly organised and often dynamic Greek Communist propaganda. Today the Greek Communist paper Rizospastis proudly proclaims that owe 50 per cent in Greek towns voted for the Republic, but the average Greek knows that this is untrue and the despairing cry of a lost cause. and that the Greeks voted against Communism because no patriotki Greek will vote for a party that advocates friendship with Bulgaria and other Slav States. For since the days of Byzantium Slays have been the enemies of Greeks.

However, King George of the Hellenes has grave problems facing him on his return. First of all there is the political situation. Although he has won a great victory, he cannot afford to ignore the Republican vote, and therefore some form of coalition government is now expected. Already the Royalist Premier, Dino Tsaldaris, has tried to induce Republican leaders to join his cabinet, but he has met with no success, and is unlikely that the aged Republican leader Themistocles Sophoulis will prove easy, even if the King offers his party important posts in the new government. For Sophoulis's hatred of the monarchy is so violent that it often trans- cends his patriotic duty. Still the old Liberal leader is so ambitious for power that he may agree to co-operate on stiff terms. More hopeful from the King's point of view are three leaders of indepen- dent Republican groups—Sophocles Venizelos (Venizelos Liberals), George Papandreou (Democratic Socialists) and Panayiotis Canell- opoulos (Unionists). All can be expected to be amenable, especially ex-Premier Papandreou, who remains one of the shrewdest politicians in Greece and has already served under the King in Cairo. But some hard political bargaining may be looked for before even these politicians agree to serve in any new government.

Then there is the question of the political amnesty. Any return- ing monarch is expected to make a political gesture of this kind, but, as the late Sophoulis Government has already given amnesties to many notorious Communists, Greek public opinion is against further concessions to the extreme Left, and argues that further amnesty for the Communists, many of whom are in prison for murder, would only provoke further bloodshed in the country. Finally, there is the question of Greece's national economy, which, despite all efforts of U.N.R.R.A. and British economic missions, remains in a pre- carious state. Britain has just bought £ro,000,000 worth of Greece's tobacco crop and promises to buy more, and the British are also negotiating for Greece's currant crop, but according to a recent U.N.R.R.A. report on Greece's economic situation the future does not look too encouraging.

According to this report, U.N.R.R.A. imports to Greece for the past eighteen months have averaged between £4,000,000 and £5,000,000 a month, including shipping charges. When U.N.R.RA imports cease at the end of 1946 it will be necessary for the Greek Government and private importers to resume their purchases abroad for _ the same amounts. Before the war Greece imported goods annually to the amount of £25,000,000. However, higher shipping charges and greater needs for imported raw materials due to lagging domestic production will at least double this expenditure in 1947. At the same time Greece during 1947 will have to import food for minimum requirements amounting to some £2o,000,000. Transport will cost another £5,000,000 sterling, with a similar amount for coal and petrol. Greece is also grievously short of industrial equipment and supplies.

Against all these needs Greece has only 'limited supplies of foreign exchange. Some of her assets remain blocked pending settlement of various claims ; others are tied up in a monetary reserve established in an effort to stabilise the 'drachma. Receipts from exports during next year are not expected to reach the pre-war figure of £18,00o,000, partly because of the disappearance of the German and Eastern European market, and Greek -export prices are still high when com- pared with the international market. Although Greece has unused credit of $25,00o,000 from the American export-import bank and a Sio,000,000 credit for purchase of American army surpluses in Europe, it is unlikely that the country can balance its budget unless it receives further support from both Britain and America.

To set against these economic disadvantages is the undoubted vitality of the Greek people. Despite immense difficulties, Greeks have already made an extraordinary recovery, and there is no doubt that the King's return will bring a feeling of confidence and stability. The results of the plebiscite have shown the good sense of the Greek nation, and although they may face difficulties in the future, there are indications that their energy may yet win through. However, much depends on how King George copes with the many problems facing him.