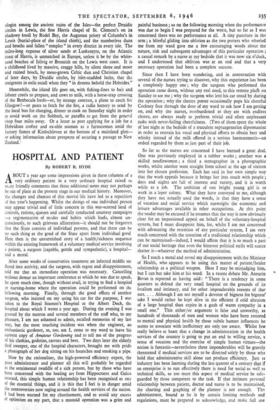 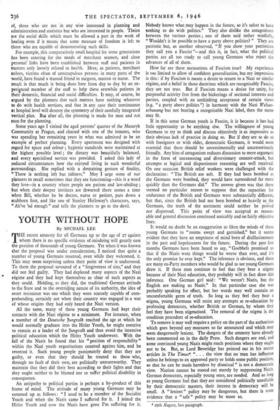 After some weeks of conservative treatment an infected middle ear flared into activity, and the surgeon, with regret and disappointment, told me that an immediate operation was necessary. Cancelling without demur an important conference at which he was due to speak, he spent much time, though without avail, in trying to find a hospital or .nursing-home where the operation could be performed on die following morning. Finally, through the good offices of another surgeon, who insisted on my using' his car for the purpose, I was taken to the Royal Seamen's Hospital at the Albert Dock, thy hospital about which I wrote a year ago. During the evening I was greeted by the matron and several members of the staff who, to my pleasure, I am not ashamed to admit, recalled memories of my last stay, but the most touching incident was when the engineer, an enthusiastic gardener, as, too, am I, came to my ward to leave his current copy of Amateur Gardening and to tell me of the progress of his clarkias, godetias, carrots and beet. Two days later the elderly deaf sweeper, one of the hospital characters, brought me with pride a photograph of her dog sitting on his haunches and smoking a pipe.

Now by the rationaliser, the high-powered efficiency expert, the pure administrator and planner all this will probably be regarded as the sentimental twaddle of a sick person, but by those who have been concerned with the healing art from Hippocrates and Galen onward, this simple human relationship has been recognised as one of the essential things, and it is this that I feel is in danger amid the controversies now raging around the health services of the nation. I had been warned for my chastisement, and to avoid any excess of optimism on my part, that a mastoid operation was a. grim and

painful business ; so on the following morning when the performance was due to begin I was prepared for the worst, but so far as I was concerned there was no performance at all. A tiny puncture in the arm ; a blissful gliding into oblivion as the two porters who wheeled me from my ward gave me a few encouraging words about the nature, risk and subsequent advantages of this particular operation ; a casual remark by a nurse at my bedside that it was now six o'clock, and I understood that oblivion was at an end and that a very necessary operation had been a complete success.

Since then I have been wondering, and in conversation with several of the nurses trying to discover, why this experience has been a completely happy one ; why the surgeon who performed the operation came down, without any real need, to this remote pla& on Sunday to see me ; why the surgeon who lent his car stood by during the operation ; why the theatre porter occasionally pops his cheerful Cockney face through the door of my ward to ask how I am getting on, and why the nurses, overburdened as they are with endless chores, are always ready to perform trivial and often unpleasant tasks with never-failing cheerfulness. (Two of them spent the whole of last night at the bedside of a truculent septuagenarian dipsomaniac in order to restrain his vocal and physical efforts to obtain beer and whisky instead of the milk offered in a serious haematemesis—an ordeal regarded by them as just part of their job.

So far as the nurses are concerned I have learned a great deaL One was previously employed in a rubber works ; another was s skilled needlewoman ; a third a stenographer in a photographic works, whilst another went straight from school at the age of sixteen into her chosen profession. Each has said in her own simple way that the work appeals because it brings her into touch with people ; days and nights are full of interest and variety, and it is worth while as a job. The ambition of one bright young girl is to work in a leper colony. What they have conveyed to me, although they have not actually used the words, is that they have a sense of vocation and social service which outweighs the economic and leisure advantages available in other occupations. At this point the reader may be excused if he assumes that the way is now obviously clear for an impassioned appeal on behalf of the voluntary-hospital system, but I must disappoint him, for, whilst I am not concerned with advocating the retention of any particular system, I am very much concerned with the retention of a traditional relationship which can be maintained—indeed, I would affirm that it is so much a part of our social heritage that even the bitterest political strife will scarce shatter it—whatever the method of administration.

So I reach a moral and reveal my disappointment with the Minister of Health, who appears to be using this matter of patient/healer relationship as a political weapon. Here I may be misjudging him, but I can but take him at his word. In a recent debate Mr. Aneurin Bevan is reported as having said : "There is a tendency in some quarters to .defend the very small hospital on the grounds of its localism and intimacy, and for other imponderable reasons of that sort. . . . Although I am not myself a devotee of bigness for bigness' sake I would rather be kept alive in the efficient if cold altruism of a large hospital than expire in a gush of warm sympathy in a

' small one." This either/or argument is false and unworthy, as hundreds of thousands of men and women who have been restored to mental and physical health by those subtle human influences he seems to associate with inefficiency are only too aware. Whilst few really believe at heart that a change in administration in the health services of the country is going to put an end to willing service, a sense of vocation and the exercise of simple human virtues—the notion is fantastic—nevertheless these imponderables will be gravely threatened if medical services are to be directed solely by those who hold that administrative skill alone can produce efficiency. Just as industry has been learning during the last quarter of a century that if an enterprise is to run effectively there is need for social as well as technical skills, so too must this aspect of medical service be safe- guarded by those competent to the task. If that intimate personal relationship between patient, doctor and nurse is to be maintained, the charting and graphing of the planner is not enough. The administrator, bound as he is by certain limiting methods and regulations, must be prepared to acknowledge, and make full use

of, those who are not in any wise interested in planning and administration and statistics but who are interested in people. Theirs tire the social skills which must be allowed a part in the work of healing even if it means that some measure of freedom is left to those who are capable of demonstrating such skills.

For example, this comparatively small hospital for some generations has been catering for the needs of merchant seamen, and close personal' links have been established between staff and patients in Matters only loosely related to health. Here, as patients, merchant 'tailors, victims often of unscrupulous persons in many parts of the world, have found a trusted friend in surgeon, matron or nurse. The result is that much is being done here from day to day by an ex- perisnced member of the staff to help these erstwhile patients in their domestic, financial and social difficulties. It may, of course, be argued by the planners that such matters have nothing whatever to do with health services, and that in any case their continuance at hospital level will destroy the symmetry of their carefully integrated Vertical plan. But after all, the planning is made for man and not, man for the planning.

Some years ago I visited the aged persons' quarter of the Masaryk Community at Prague, and chatted with one of the inmates, who was spending her remaining years in what was admitted to be an example of perfect planning. Every apartment was designed with regard for space and colour ; hygienic standards were maintained at the highest possible level ; the dietary was beautifully balanced, and every specialised service was provided. I asked this lady of reduced circumstances how she enjoyed living in such wonderful !surroundings. , She replied with a despairing gesture of finality, "There is nothing left but tidiness." May I urge some of our planners to recall sometimes that they are functioning—this is a word they love—in a country where people are patient and law-abiding ; but when their deeper instincts are thwarted there comes a time when Bill, whether he be doctor, nurse or patient, puts down a stubborn foot, and like one of Stanley Holloway's characters, says,

Ah've 'ad enough" and tells the planners to go to the devil.