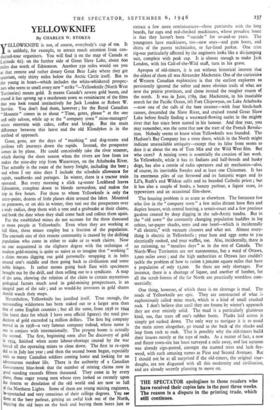 YELLOWKNIFE is not, of course, everybody's cup of tea. It is unlikely, for example, to attract much attention from con- ducted-tour organisers. You will find it on the map of Canada at Latitude 62i, on the further side of Great Slave Lake, about 600 miles due north of Edmonton. Another 250 miles would see you at that remote and rather dreary Great Bear Lake where they get uranium, only thirty miles below the Arctic Circle itself. But to the young in heart—which includes the white-whiskered prospec- tors who seem to smell every new " strike "—Yellowknife (North West Territories) means gold. It means Canada's newest gold boom, and round it has sprung up a mushroom town so reminiscent of the films that you look round instinctively for Jack London or Robert W. Service. You don't find them, however ; for the Royal Canadian "Mountie" comes in to shout "Time, gents, please" at the one and only saloon, while up at the "company town" mine-managers' wives entertain with cakes, coffee and bridge. But the main difference between this latest and the old Klondykes is in the method of approach.

Gone, gone, are the days of " mushing " and dog-teams and perilous rift journeys down the rapids. Instead,, the prospector comes in by plane. He could conceivably take the river steamer, which during the short season when the rivers are free from ice makes the nine-day trip from Waterways, on the Athabaska River. That actually is the route of the heavy freight, including the beer ; and when I say nine days I include the schedule allowance for rapids, sandbanks and portages. In winter, there is a tractor train operated. But every morning a slick 14-seater Lockheed leaves Edmonton, complete down to blonde stewardess, and makes the trip in five hours. For those to whom Yellowknife is only the entry-point, dozens of little planes skim around the lakes. Mounted on pontoons, or on skis in winter, they taxi out the prospectors over a wide radius, drop them with a tent and a grubstake at their claims, and book the date when they shall come back and collect them again.

For the established mines do not account for the three thousand or more people at Yellowknife. Even when they are working at full blast, these mines employ but a fraction of the population. The uncouth size of this remote community is caused by the drifting population who come in either to stake or to work claims. Now no one acquainted in the slightest degree with the technique of modern gold-mining is quite so naive as to imagine that " working " a claim means digging out gold personally, strapping it in belts around one's middle and then going back to civilisation and some noble binges. It rather means going back East with specimens brought out by the drill, and then selling out to a syndicate. A map of the area, showing the relation of the claim to certain mysterious geological facuirs much used in gold-mining prospectuses, is an integral part of the sale ; and so would-be investors in gold shares should watch their maps.

Nevertheless, Yellowknife has justified itself. True enough, the surrounding wilderness has been staked out to a larger area than that of some English counties ; but all the same, from 1938 to 1944 (the latest date for which I have seen official figures), the total pro- duction of gold exceeded 14 million dollars. The first big company moved in in 1938—a very famous company indeed, whose name is one to conjure with internationally. The present boom is actually the second. The first, beginning soon after the discovery of gold in 1934, finished when acute labour-shortage, caused by the war forced all the operating mines to close down. The first to re-open did so in July last year ; and then the second boom began, especially With so many Canadian soldiers coming home and looking for an adventurous outdoor life. There is the authority of a Canadian Government blue-book that the number of mining claims now in good standing exceeds fifteen thousand. They come in by every Plane, these eager young men whose eyes looked so recently upon the deserts or desolation of the old world and are now so full of the Northern Lights. Some of them are young mining engineers, be-spectacled and very conscious of their college degrees. You see them at the beer parlour, getting an awful kick out of the North, liaPPing the old boys on the back and buying them beers just to extract a few more reminiscences—those patriarchs with the long beards, fur caps and red-checked mackinaws, whose proudest boast is that they haven't been " outside " for so-and-so years. The youngsters have mackinaws, too—new ones—and gum boots, and shirts of the purest technicolor, or fur-lined parkas. One trim rig-out particularly affected by the engineers looks like a ski-jumping suit, complete with peak cap. It is almost enough to make Jack London, with his Call-of-the-Wild stuff, turn in his grave.

Apropos of old-timers, it is not without historical interest that the oldest of them all was Alexander Mackenzie. One of the curiosities of Western Canadian exploration is that the earliest explorers so persistently ignored the softer and more obvious trails of what are now the prairie provinces, and chose instead the rougher routes of the north. It was in June, 1789, that Mackenzie, in his insatiable search for the Pacific Ocean, left Fort Chipewyan, on Lake Athabaska —now one of the calls of the beer steamer—with four birch-bark canoes, descended the Slave River, and cruised round Great Slave Lake before finally finding a westward-flowing outlet in the mighty river that has since been named in his honour. And that year, you may remember, was the same that saw the start of the French Revolu- tion. Nobody seems to know when Yellowknife was founded. The Hudson's Bay Company has a store there, which in the North might indicate unassailable antiquity—except that its false front seems to date it at about the era of Tom Mix and the Wild West film. But who cares? A mining town is essentially the creation of last week. So Yellowknife, while it has its Indians and half-breeds and husky dogs, has also a coterie of radio operators and air mechanics—also, of course, its inevitable Swedes and at least one Chinaman. It has its enormous piles of cut firewood and its fantastic wages and its Lirs, Ruth's and Wildcat cafés and its bearded Catholic priest ; but it has also a couple of banks, a beauty parlour, a liquor store, it3 typewriters and an occasional film-show.

The housing problem is as acute as elsewhere. The fortunate few who live in the "company town" a few miles distant have flats and duplex houses, with central heating, a tennis-court and a few precious gardens created by deep digging in the sub-Arctic tundra. But in the "old town" the constantly changing population huddles in log cabins, tar-paper shacks, tents and one hotel—which is incidentally "all electric," with vacuum cleaners and what not. Almost every- thing is electric in Yellowknife ; your ham and eggs come to you electrically cooked, and your waffles, too. Also, incidentally, there is no rationing, no "meatless days" as in the rest of Canada. The North-West Territories are not autonomous, but a ward of Ottawa, zpoo miles away ; and the high authorities at Ottawa just couldn't tackle the problem of how to ration 1,300,00o square miles that have a population of only 13,000. So there are only shortages. For instance, there is a shortage of liquor, and another of lumber, for all the scrub forests of the far North are practically worthless com- mercially.

One thing, however, of which there is no shortage is mud. The roads of Yellowknife are epic. They are constructed of what :s euphoniously called mine muck, which is a kind of small crushed rock. I don't believe that until they are frozen by winter's approach they are ever entirely solid. The mud is a particularly glutinous kind, too, that tears off one's rubber boots. Planks laid across it simply get sucked down. The only way to navigate it is to avoid the main street altogether, go round to the back of the shacks and leap from rock to rock. That is possibly why the old-timers build their houses mostly at the tops of rocks. As a matter of fact, a new and flatter town-site has been surveyed a mile away, and last autumn was already sign-posted, amongst the stunted trees and lush fire- weed, with such amusing names as First and Second Avenues. But I should not be at all surprised if the old-timers, the original sour- doughs, are not disgusted with all this modernity and civilisation, and are already secretly planning to move on.