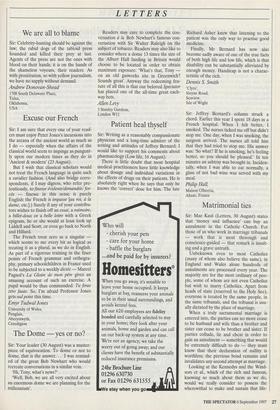 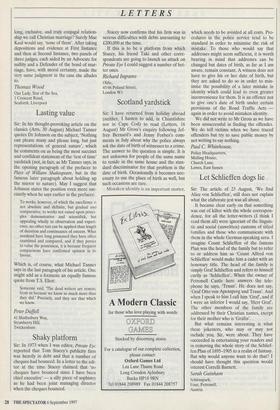 Sir: Mae Kaul (Letters, 30 August) states that 'money and influence' can buy an annulment in the Catholic Church. For those of us who work in marriage tribunals — work that is most thorough and conscience-guided — that remark is insult- ing and a grave untruth.

Unbeknown even to most Catholics (many of whom also believe the same), in England and Wales alone hundreds of annulments are processed every year. The majority are for the most ordinary of peo- ple, some of whom are not even Catholics but wish to marry Catholics. Apart from heads of state (reserved to the Holy See), everyone is treated by the same people, in the same tribunals, and the tribunal is usu- ally dictated by the place of marriage.

When a truly sacramental marriage is entered into, the parties can no more cease to be husband and wife than a brother and sister can cease to be brother and sister. If parties collude, lie and cheat in order to gain an annulment — something that would be extremely difficult to do — they must know that their declaration of nullity is worthless; the previous bond remains and invalidates any second attempt at marriage.

Looking at the Kennedys and the Wind- sors et al., which of the rich and famous, knowing so much about them as we do, would we really consider to possess the wherewithal to make and sustain that life-

long, exclusive, and truly conjugal relation- ship we call Christian marriage? Surely Mae Kaul would say, 'none of them'. After taking depositions and evidence at First Instance and then at Second Instance, two panels of three judges, each aided by an Advocate for nullity and a Defender of the bond of mar- riage, have, with moral certainty, made the very same judgment in the case she alludes to.

Our Lady, Star of the Sea, 1 Crescent Road, Seaforth, Liverpool