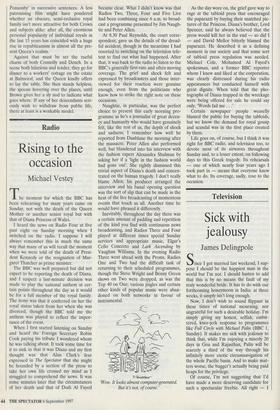 Rising to the occasion

The moment for which the BBC has been rehearsing for many years came on Sunday, not with the death of the Queen Mother or another senior royal but with that of Diana Princess of Wales.

I heard the news on Radio Four at five past eight on Sunday morning when I switched on the radio. I suppose I will always remember this in much the same way that many of us will recall the moment when we were told of the death of Presi- dent Kennedy or the resignation of Mar- garet Thatcher as prime minister.

The BBC was well prepared but did not expect to be reporting the death of Diana, and I suspect a last-minute decision was made to play the national anthem at cer- tain points throughout the day as it would be for a full member of the royal family. The irony was that it conferred on her the royal status taken from her when she was divorced, though the BBC told me the anthem was played to reflect the impor- tance of the event.

When I first started listening on Sunday and heard the Foreign Secretary Robin Cook paying his tribute I wondered whom he was talking about. It took some time for it to sink in that it was Diana and my first thought was that Alan Clark's fear expressed in The Spectator that she might be hounded by a section of the press to take her own life crossed my mind as I struggled to comprehend the news. It was some minutes later that the circumstances of her death and that of Dodi Al Fayed became clear. What I didn't know was that Radios Two, Three, Four and Five Live had been combining since 6 a.m. to broad- cast a programme presented by Jim Naugh- tie and Peter Allen.

At 8.30 Paul Reynolds, the court corre- spondent, gave us the details of the dread- ful accident, though in the meantime I had resorted to switching on the television tele- text to find out what had happened. After that, it was back to the radio to listen to the BBC's generally first-rate and often moving coverage. The grief and shock felt and expressed by broadcasters and those inter- viewed for their reaction were genuine enough, even from the politicians who know how to strike the right note on these occasions.

Naughtie, in particular, was the perfect choice to present this early morning pro- gramme as he's a journalist of great decen- cy and humanity who would have genuinely felt, like the rest of us, the depth of shock and sadness; I remember how well he reported from Dunblane the morning after the massacre. Peter Allen also performed well, but blundered into his interview with the fashion expert Alexandra Shulman by asking her if a 'light in the fashion world had gone out'. She rightly dismissed this trivial aspect of Diana's death and concen- trated on the human tragedy. I don't really blame Allen; his producer arranged the interview and his banal opening question was the sort of slip that can be made in the heat of the live broadcasting of momentous events that touch us all. Another time he would have phrased it differently.

Inevitably, throughout the day there was a certain amount of padding and repetition of the kind you find with continuous news broadcasting, and Radios Three and Four played at different times special Sunday services and appropriate music, Elgar's Cello Concerto and Lark Ascending by Vaughan Williams. In the evening Radio Three went ahead with the Proms. Radios One and Two had the difficult task of returning to their scheduled programmes, though the Steve Wright and Benny Green shows on Two were dropped, as was the Top 40 on One; various jingles and certain other kinds of popular music were aban- doned on both networks in favour of instrumental.

`Wow. It looks almost computer-generated. But its not, of course.' As the day wore on, the grief gave way to rage at the tabloid press that encouraged the paparazzi by buying their snatched pic- tures of the Princess. Diana's brother, Lord Spencer, said he always believed that the press would kill her in the end — so did I — and David Mellor bitterly blamed the paparazzi. He described it as a defining moment in our society and that some sort of tabloid press regulation was needed. Michael Cole, Mohamed Al Fayed's spokesman, and a former BBC reporter whom I knew and liked at the corporation, was clearly distressed during his radio appearances but conducted himself with great dignity. When told that the pho- tographs of Diana trapped in the wreckage were being offered for sale he could say only, 'Words fail me . .

Certain newspaper people weaselly blamed the public for buying the tabloids, but we know the demand for royal gossip and scandal was in the first place created by them.

Life goes on, of course, but I think it was right for BBC radio, and television too, to devote most of its airwaves throughout Sunday and, to a lesser extent, on following days to this Greek tragedy. Its rehearsals — one of which nearly four years ago I took part in — meant that everyone knew what to do. Its coverage, sadly, rose to the occasion.